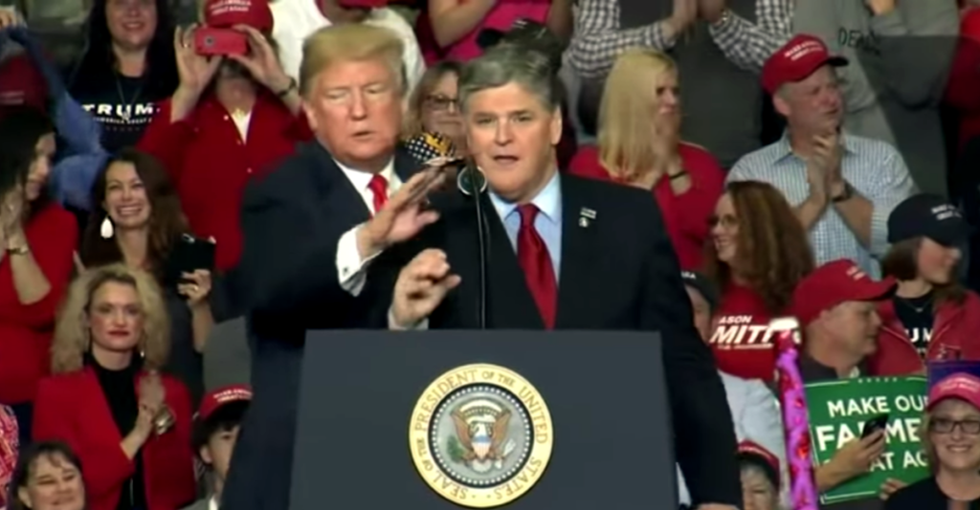 The campaign of President Donald Trump announced Sunday on their website that Fox News personality Sean Hannity would appear as a guest at Trump's Monday, November 5, Make America Great Again rally in Missouri. The announcement raised concerns over the separation between the press and government.

Fox News already faced harsh criticism for their coverage of the Trump administration as well as accusations of being a government run propaganda network. However Fox News quickly responded to the Trump campaign announcement, stating they were unsure how the Trump campaign got that impression, but it was false.

According to Fox News, in a statement made in advance of Monday night's rally, Sean Hannity would merely broadcast an episode of his Fox News program from the Make America Great Again rally location before it began, then attend as an unbiased press observer. Fox insisted Hannity would not appear on stage.

Hannity himself took to Twitter to dispel the rumors. On Monday night, he tweeted:

"In spite of reports, I will be doing a live show from Cape Girardeau and interviewing President Trump before the rally. To be clear, I will not be on stage campaigning with the President. I am covering final rally for my show. Something I have done in every election in the past."

The President had two Fox News personalities come on stage and address the crowd: Sean Hannity and Jeanine Pirro. Trump introduced them after stating:

"They’re very special; they’ve done an incredible job for us. They’ve been with us from the beginning."

Both Hannity and Pirro had effusive praise for the President, further reinforcing media watchdog criticisms over Fox News' bias.

Hannity first hugged Trump then pointed to the press area at the back of the arena and stated:

"By the way, all those people in the back are fake news."

Pirro bowed to the President when she came onto the stage.

"Either Fox News lied all day about their direct collaboration with the Trump campaign, or the network simply doesn’t have any control over Sean Hannity."

"This is a problem. It’s dangerous for democracy and a threat to a free press."

Others called out the hypocrisy of Fox and Hannity.

@seanhannity It appears that the reports were right. In light of this information, I’d have to say that YOU are fak… https://t.co/O6Nt6yTkJH
— Sheldon Beatty (@Sheldon Beatty) 1541510747.0

@seanhannity @realDonaldTrump Or, did you and Trump go to different schools of lying and found each other at a liar… https://t.co/EmKUbBKWJq
— Sheldon Beatty (@Sheldon Beatty) 1541510900.0

The November 5 Make America Great Rally where both Hannity and Pirro campaigned for the President marked the final rally before the midterm elections.

Midterms are slated for Tuesday, November 6, 2018. Most polls around the country are open until at least 8pm local time.