Before Conservatives Hailed Trump's Meeting With Kanye, They Railed Against Obama for Meeting With Rappers--Because Of Course They Did 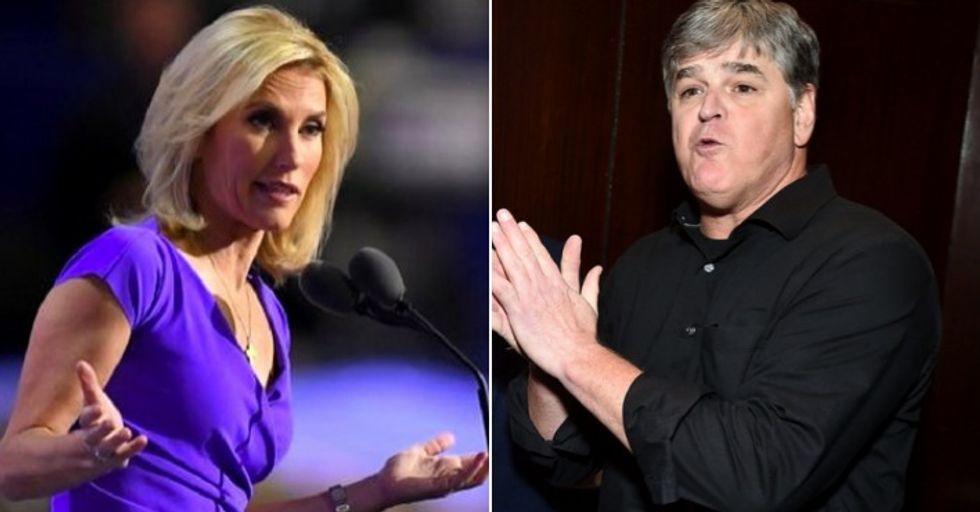 As most of the world now knows, artist Kanye West visited President Donald Trump in the Oval Office on Thursday. The lunch meeting included an almost 10 minute rambling diatribe from West who revealed in August he was diagnosed with bipolar disorder.

While West now claims it was a misdiagnosis and he only suffers from sleep deprivation, many thought the rapper and designers behavior resembled a manic episode. Especially after West went to an Apple Store after leaving the White House and climbed on a table to deliver an impromptu "keynote" address.

Pundits and the public criticized the Trump administration for exploiting someone who appears to be going through a mental health crisis. Except on Fox News where both West and Trump garnered high praise from conservative hosts.

And as is a more and more common theme, Fox News pundits like Sean Hannity portrayed West as the victim of unwarranted liberal or Democrat backlash only because of his conservative views. Laura Ingraham even went so far as to claim no other rapper ever received the feedback West got.

But internet sleuths took a look back at other rappers at the White House and their reception over at Fox News from the same hosts praising West. People needed to look no further than President Barack Obama to see the hypocrisy from Hannity, Ingraham and others at Fox News.

The Obamas hosted a variety of artists at the White House during their time there, including rap artists.

Now This put together a greatest hypocrisy hits video featuring Fox News effusive praise for West, Ingraham's claim of victimhood and their vitriol for rappers who visited the Obamas.

People were not particularly surprised to hear Laura Ingraham talk out of both sides of her mouth.

Nor was hypocrisy from any other Fox News host a shock.

@nowthisnews OMG! Hahahahahaha! They are trying to spin the spun! Hahahahaha Omg that is hilarious!
— Colleen Lyon (@Colleen Lyon) 1539373197.0

While some echoed the concerns many expressed for West's current mental state.

@nowthisnews When you watch these people you can see they’re putting on a show. They deliver everything with a sid… https://t.co/pEcUYPjbch
— Danny Casson (@Danny Casson) 1539379242.0

Many questioned just how familiar Fox News hosts like Carlson, Hannity and Ingraham are with rap music.

Although one person wondered something else entirely; like, are Laura Ingraham and Tucker Carlson related?

And a few had a slightly different take on the West-Trump Oval Office love fest.