Rep. Deb Haaland's Emotional Message to Transgender Servicemembers About Donald Trump Is Going Viral for All the Right Reasons 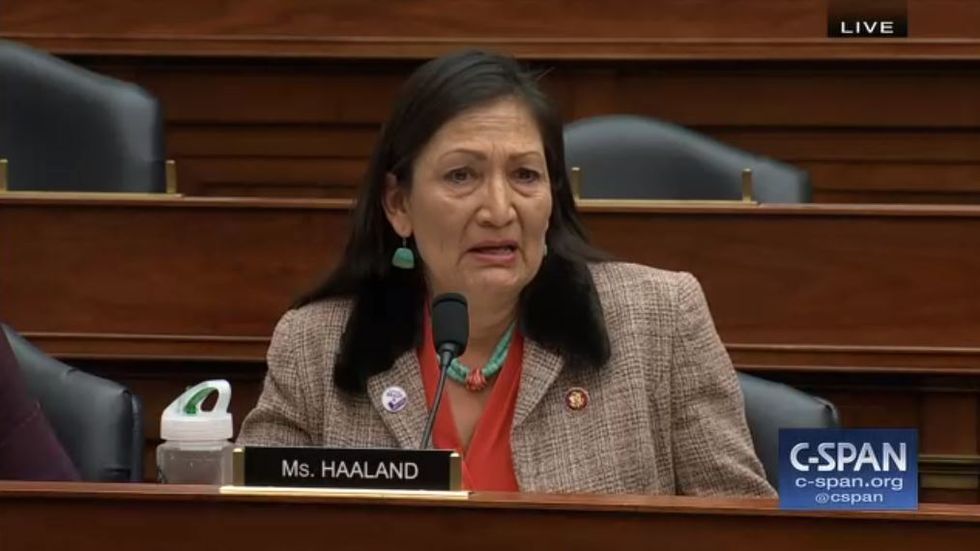 Wednesday the House Armed Services Subcommittee on Military Personnel held hearings regarding the Trump administration's reinstated ban on transgender servicemembers. One of the newly appointed members of the committee in attendance was New Mexico Representative Deb Haaland. In November, Haaland became one of two Native American women—both Democrats serving in the House—who made history as the first ever elected to Congress.

Kansas Representative Sharice Davids, Ho-chunk, and Haaland, Laguna Pueblo, share another commonality: both are the children of career military members. Davids' mother served in the Army while Haaland's father did 30 years in the Marine Corps and Haaland's mother was a member of the Navy.

That service is important to Haaland and Native culture as a whole. Natives serve in the United States Armed Forces in higher numbers than any other ethnicity—during peace and wartime—and have done so since the Revolutionary War.

That cultural dedication to service and her own military family background framed the freshman Congresswoman's emotional response to transgender servicemembers that testified before the subcommittee.

.@RepDebHaaland sheds tears at House Armed Services hearing on #transgender serving in the #military as she thanks… https://t.co/2CUnilN4qY
— D. Mills-Gregg (@D. Mills-Gregg) 1551306736.0

“Transgender servicemembers honorably serve our country, and are not any different than any other service member,”… https://t.co/czK1bzAm8X
— Out Magazine (@Out Magazine) 1551381693.0

Reflecting on her own daughter being gay, @Deb4CongressNM tells the trans servicemembers: "Right now, if you tried… https://t.co/bUcxKq5XEq
— Zack Ford (@Zack Ford) 1551306262.0

Haaland also posted her views on her official Twitter feed.

@HRC @RepDebHaaland Yes! I am heartened by the new class of Congresspeople who are bringing palpable compassion to the office.
— Acerbic Librarian (@Acerbic Librarian) 1551320204.0

@HRC @RepDebHaaland I’m proud to be from New Mexico and voting her in was one of the best decisions New Mexicans could have made.
— Dana Goldberg (@Dana Goldberg) 1551337583.0

This is not the first time the New Mexico Representative spoke out in support of transgender rights.

Haaland has been vocal about equality for transgender people.

Haaland met with transgender servicemembers before the subcommittee hearing.

Regarding the meeting she stated:

"Transgender servicemembers honorably serve our country, and are not any different than any other service member: they come from families in which service is a tradition, they go through the same training and abide by the same requirements, and they are actively serving overseas. They deserve fairness and respect."