Rep. Deb Haaland Just Got a Bipartisan Standing Ovation on the Floor of the House of Representatives After Making Congressional History 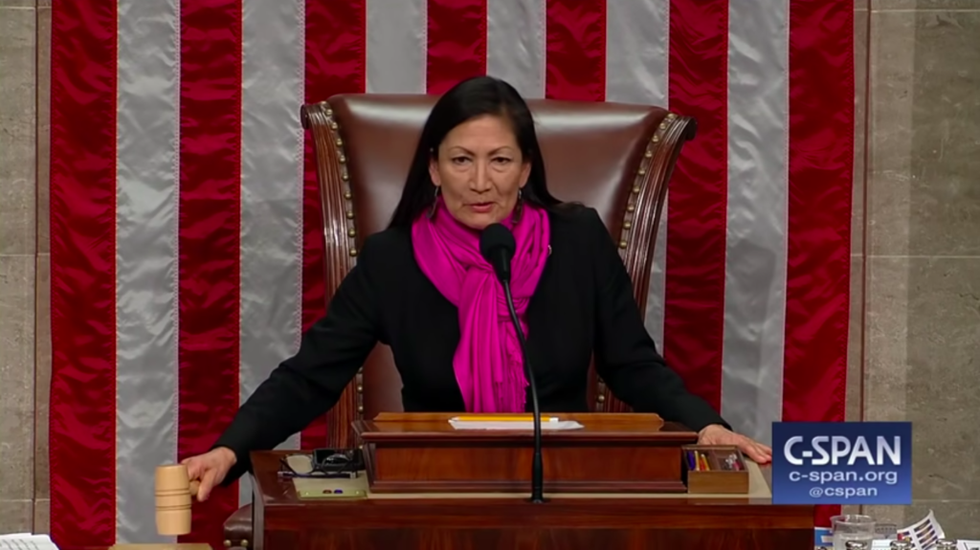 During a House committee meeting on Friday, as first-term Representative Deb Haaland (D-NM) presided over the floor of the House, Republican Representative Rodney Davis of Illinois asked the House to recognize the history that Haaland was making.

"Before I get started, could I ask for a point of personal privilege to have the members of this institution and the gallery recognize you as the first Native American woman to ever chair the House proceedings?"

The House members proceeded to give Haaland, Laguna Pueblo, a standing ovation.

The moment was captured by C-SPAN, you can watch it here:

And people celebrated the moment.

Congress gave @Deb4CongressNM a standing ovation when she became the first Native American woman to ever chair the… https://t.co/Q1yEN8GAPR
— NowThis (@NowThis) 1552077180.0

Haaland was elected during the 2018 midterms along with Ho-Chunk tribal member Democrat Sharice Davids of Kansas to become the first two Native American women to ever serve in Congress after 230 years and 115 Congresses.

Haaland responded with a reference to another moment the two women shared:

"Your scarf is my scarf" ❤️

The two also joined together to introduce a resolution for Women's History Month to recognize the contributions made by and the struggles faced by Indigenous women in the United States.

Haaland has reflected often on the importance of representation for all people.

"It’s amazing what can happen when the people in Congress are more like the constituents they serve. #BeFierce"

It’s amazing what can happen when the people in Congress are more like the constituents they serve. #BeFierce https://t.co/wuLVsfd29z
— Deb Haaland (@Deb Haaland) 1548473024.0

Others in "NDN Country" expressed the same need for visibility, especially for Native women.

Native women lead and inspire every day, in every way! Join us in celebrating #InternationalWomensDay and honoring… https://t.co/aDZFWgHGWE
— NCAI (@NCAI) 1552072250.0

One of the issues Haaland and Davids hope to address is the number of missing and murdered Indigenous women throughout the United States.

'Is this the message that we should pass down to our youth?' — One of the first Native American congresswomen… https://t.co/zuQZqZvOBI
— NowThis (@NowThis) 1550104260.0

As Haaland and other "first" women in Congress continue to compile accomplishments, the needs of those who share their background can finally be heard. Having a voice in the process requires a seat at the table.