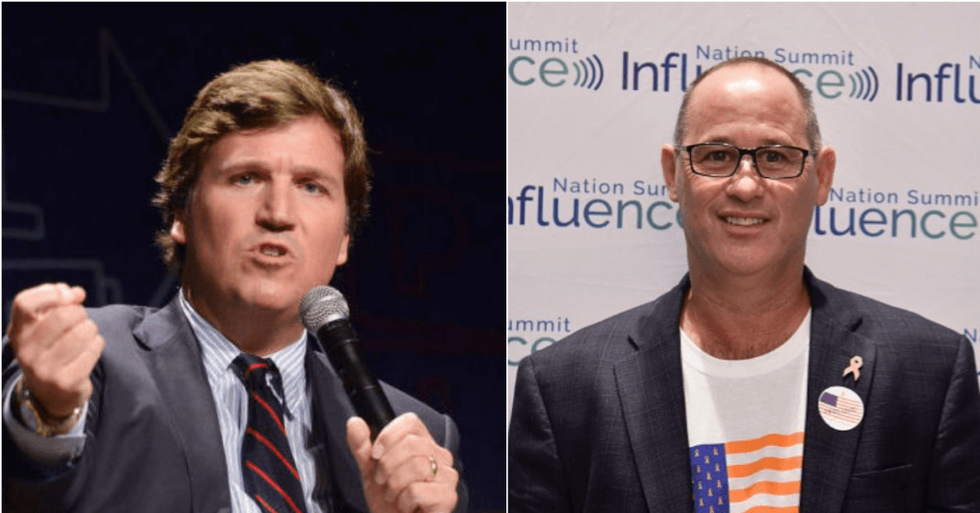 In an appearance on Fox News Tucker Carlson Tonight, Carlson and guest Dana Loesch of the National Rifle Association (NRA) resurrected footage from February 2018 to attack the victims of the mass murder at a Parkland, Florida high school.

Jordan Uhl of MoveOn.org shared the Fox News footage on Twitter after it aired, tagging several of the young gun violence prevention advocates that appeared in the clip.

Demagogue: a political leader who seeks support by appealing to the desires and prejudices of ordinary people rather than by using rational argument

How dare these school shooting survivors express their rage at *checks notes* getting shot at and having their frie… https://t.co/pnvpdQ6Pdw
— Molly Jong-Fast (@Molly Jong-Fast) 1553222078.0

One of the people responding to Uhl's post was Fred Guttenberg whose 14-year-old daughter Jaime was murdered in the mass shooting on February 14, 2018 at Marjory Stoneman Douglas High School.

"Dana, my amazing daughter Jaime was a victim of Parkland, you were not. You are a pathetic person. I am not a demagogue or part of a mob, I am a father who misses his daughter every second. The town hall was days after she was killed, we were in pain. You should be fired."

Dana, my amazing daughter Jaime was a victim of Parkland, you were not. You are a pathetic person. I am not a dema… https://t.co/wxJID6FLoG
— Fred Guttenberg (@Fred Guttenberg) 1553214673.0

The intent of bringing back the footage over a year later seemed to be to gain sympathy for Loesch or the NRA in the wake of amplified gun control dialogue after New Zealand tackled the aftermath of their own mass shooting.

Within days of the hate crime that took 50 lives, Kiwis were voluntarily turning in automatic weapons for destruction and government was drafting a ban on the weapons.

In the United States, government officials saw renewed pressure regarding a lack of action after the many mass shootings every year. And the NRA's gun rights rhetoric took a beating.

But lashing out at survivors of deadly school shootings and the families of victims might have played well to Tucker Carlson's fan base, but backfired on social media.

Loesch was not seen as the victim of Parkland survivors and families as Carlson attempted to make her.

Both parties received considerable backlash over the segment and their remarks.

And their new buzzword.

People called out both Loesch and Carlson.

@fred_guttenberg Everyone please stop watching this show. I could not believe this piece with Loesch. This is the b… https://t.co/FftfIkY37E
— lorraine (@lorraine) 1553263592.0

Ultimately, only Carlson and Loesch know the purpose of their trip down memory lane to ridicule the survivors of the Parkland school mass murder, but whatever it was it turned out badly in the court of public opinion.