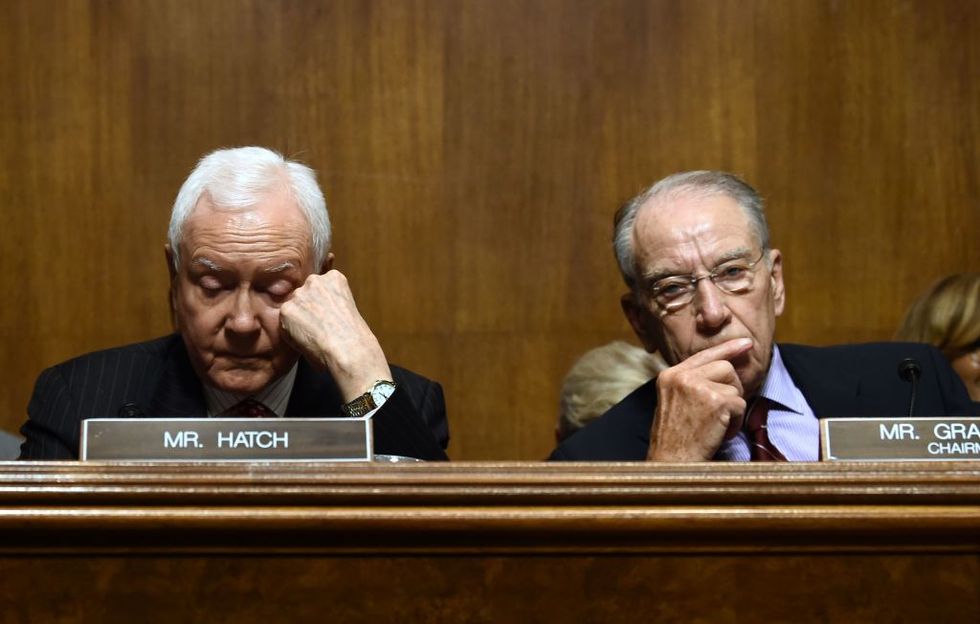 Senate Judiciary Committee chair Chuck Grassley and Senator Orrin Hatch wait during a hearing on Capitol Hill in Washington, DC on September 28, 2018, on the nomination of Brett M. Kavanaugh to be an associate justice of the Supreme Court of the United States. - Kavanaugh's contentious Supreme Court nomination will be put to an initial vote Friday, the day after a dramatic Senate hearing saw the judge furiously fight back against sexual assault allegations recounted in harrowing detail by his accuser. (Photo by Brendan SMIALOWSKI / AFP) (Photo credit should read BRENDAN SMIALOWSKI/AFP/Getty Images)

The drama of Supreme Court nominee Brett Kavanaugh's confirmation reached its mid-season finale today when Senator Jeff Flake (R-AZ) called for an FBI investigation into the sexual assault allegations against Kavanaugh before the confirmation vote in the senate. Though Flake still voted for Kavanaugh to proceed out of the Senate Judiciary Committee, the demands for an investigation were something Democrats and even some Republicans had been championing, and now the President has relented and requested such an investigation.

Now, a viral photo is showing just how Committee chair Chuck Grassley (R-IA), and committee member Orrin Hatch (R-UT), as well as a mystery aide, reacted the moment Flake announced to the committee that his vote was conditional.

The result is a portrait Michelangelo couldn't paint.

@LACaldwellDC @JeffFlake The look on @OrrinHatch when he heard the news about @JeffFlake https://t.co/iEimAWnLya
— Jason (@Jason) 1538159886.0

Let's get a closer look:

While the mystery woman is certainly the star of this photo, Hatch and Grassley weren't forgotten either.

Many were comparing the two senators with other famous duos.

While Jeff Flake was seen as the sole swing vote on the Senate Judiciary Committee, he announced his support for Kavanaugh and it seemed like hope was lost.

While it was a moment of dismay for Grassley and Hatch, most people related to the overjoyed woman in the background.

While Flake's demand for an FBI investigation seemed sudden, he seemed torn even after the hearings. Once he heard both testimonies, he said:

I would just urge my colleagues to recognize that in the end we are 21 very imperfect senators trying to do our best to provide advice and consent. And in the end, there is likely to be as much doubt as certainty going out of this room today. As we make decisions going forward, I hope that people will recognize that.

After announcing his intention to vote Kavanaugh through committee, Flake was approached by two victims of sexual assault who confronted him in an elevator in a powerful exchange.

Sen. Jeff Flake is confronted by protestors on his way to the Senate Judiciary Committee vote after announcing he w… https://t.co/bHsz2FnAgI
— Axios (@Axios) 1538142431.0

Though he did end up voting for Kavanaugh, the caveat of an FBI investigation hasn't erased hope for the Democrats, though whether or not the investigation will happen remains up to Donald Trump.