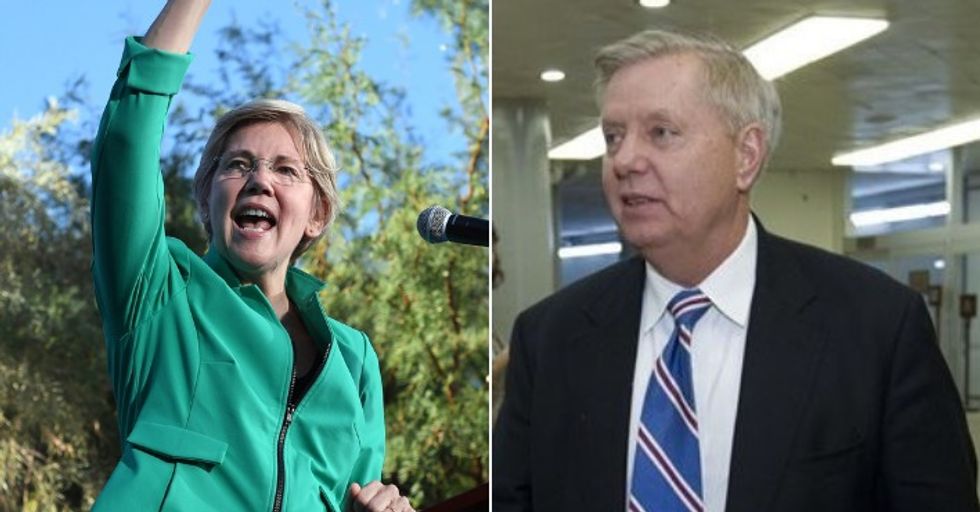 In response to repeated racial slurs by President Donald Trump on Twitter and in his rallies and public appearances, Massachusetts Democratic Senator Elizabeth Warren took a DNA test to prove her claim of an unnamed, unidentified Native American ancestor in her mother's family line.

On Monday, Warren shared her DNA results and her family story asking Trump to pay the $1 million dollars he said he would donate to charity if she took a DNA test and proved there was a Native American ancestor in her matrilineal genealogy.

But rather than admit he was wrong or make the charitable donation, Trump first said he did not care, denied his July statement issuing the challenge and then took to Twitter Tuesday morning to again use the name of Tsenacommacah Algonquian Confederacy woman, Pocahontas, as a racial slur. Native leaders asked the President to stop using Pocahontas' name in attacks on Warren.

It seems the bar shifted from proving Warren had a Native American ancestor, which is what she claimed based on stories from her mother, to having "enough" Native American DNA and tribal enrollment in the Cherokee Nation.

Warren mentioned her mother thought the ancestor might be Cherokee, but never claimed tribal affiliation. However after her DNA test reveal, the media sought input from the Cherokee Nation.

As sovereign nations, tribes determine their own eligibility criteria for citizens and enrollment. DNA testing is not a factor in tribal citizenship or affiliation.

But Trump and his supporters seized on the relatively small amount of Native American DNA in Warren's results, even though it proves she did have an unidentified Native ancestor as she claimed, and her lack of endorsement for tribal citizenship from the Cherokee Nation as a new opportunity to mock Warren.

On Tuesday, Republican Senator Lindsey Graham got in on the attack during an appearance on Fox & Friends. Graham stated:

"I've been told that my grandmother was part Cherokee Indian. It may all be just talk, but you're gonna find out in a couple of weeks because I'm gonna take this test."

Graham said he was sure he could "beat Warren." He added:

"I didn't think about it much, but if she's less than one tenth of one percent, I think I can beat her."

In his remarks regarding Warren, Graham said he viewed the test as a "reality TV moment" and vowed to reveal his results on Fox & Friends. Graham topped it off with a racist comment about getting $1 million and a casino, as a jab at Native American gaming.

"I'm going to take it, but the results are going to be revealed here. This is my Trump moment."

Not content with mocking Warren and the Cherokee Nation, Graham ended his visit with a jab at Persians, or Iranians, as the South Carolina Senator called them. The GOP legislator said:

Many cited Graham's confusion between racism and humor.

While others wondered about the obsession with Warren's ancestry and what else might show up in a Graham DNA test.

@HillReporter I’m willing to bet that Lindsay Graham doesn’t have an ounce of Cherokee in him. But I’m pretty sure… https://t.co/jAjkbpT2nk
— Trini Girl 🇹🇹🇺🇸 (@Trini Girl 🇹🇹🇺🇸) 1539715226.0

I don't know if @LindseyGrahamSC has more Cherokee in his DNA than @elizabethforma, but he definitely has more estr… https://t.co/kOsxPbsls1
— veronicanyce (@veronicanyce) 1539718649.0

Lindsey Graham needs to be worried less about his supposed Cherokee heritage and more about the fact that he is den… https://t.co/oYtmWRNTnm
— TiaS (@TiaS) 1539700817.0

Warren is up for reelection in November's midterms. Midterm elections are slated for Tuesday, November 6, 2018.