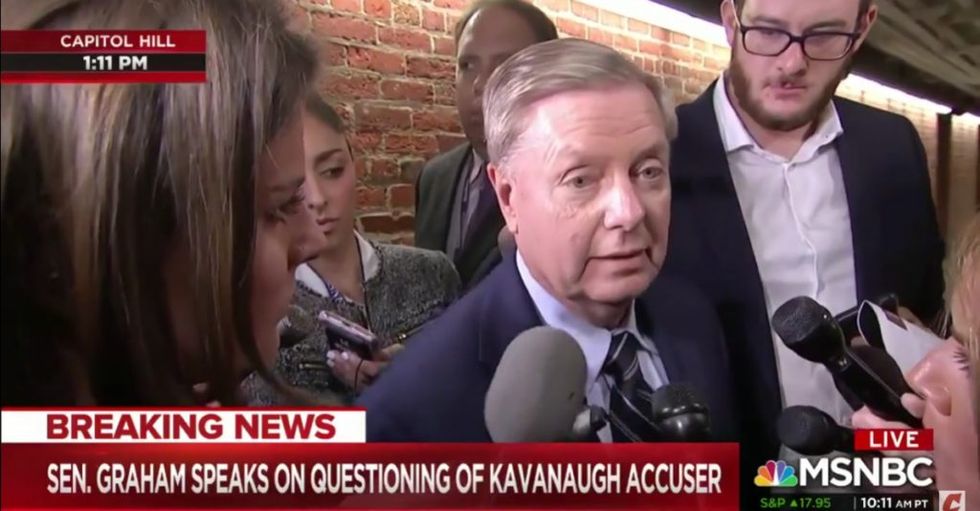 Senator Lindsey Graham speaks to the press during a break in the Kavanaugh SCOTUS confirmation hearing. (MSNBC/YouTube)

A vocal supporter of Kavanaugh, Graham then added a statement about the confirmation process from his perspective. His comments took an understandably partisan view of the sequence of events.

The South Carolina Republican repeated many of the talking points the President and Fox News use to defend Kavanaugh. He also tried to discredit the need for a full background check—like the one conducted on Justice Clarence Thomas after Dr. Anita Hill came forward—and attacked Dr. Christine Blasey Ford's credibility again.

But just before pushing his way past the gathered reporters, the GOP member of the Senate Judiciary Committee called on his fellow Republican members to support Kavanaugh or "God help us as Republicans, because this happens to us, this never happens to them."

He then addressed his Democratic colleagues in the Senate and stated:

"Let me tell you my Democratic friends, if this is the new norm, then you better watch out for your nominees."

Lindsey Graham found his voice in the hallway and he sounds rattled. He's pushing for the vote still and then thre… https://t.co/BFeK5trMAq
— Red T Raccoon (@Red T Raccoon) 1538069641.0

Graham did not specify if his threat included only future Democratic Presidential appointments to the Supreme Court or if he intended to threaten all future appointments made by a Democrat in retaliation.

As for his claims about only the GOP being targets of accusations of sexual misconduct, people quickly rebutted the Senator.

As part of his indictment against Democrats, Graham also stated the review of sexual assault allegations against Kavanaugh amounted to a delay tactic, trying to push the vote until after the November midterm elections. However, Graham failed to acknowledge his own party's use of delay tactics for President Barack Obama's final SCOTUS nominee, Merrick Garland.

But people happily reminded him.

Were democrats this upset & did they whine like Lindsey Graham when Merrick Garland didn't get a Supreme Court nomination hearing?
— Kay Shan (@Kay Shan) 1538073198.0

So what you are saying @LindseyGrahamSC is that you think Democrats have been playing politics with a nomination to… https://t.co/wN5gYt84Lf
— Jasper (@Jasper) 1538073674.0

Graham's threat of retaliation did not sit well either.

People online found it hard to believe a sitting member of Congress would make a threat so openly in front of the press.

In other words, Lindsey Graham thinks women are liars and that he can find more lying women to lie about Democrats.… https://t.co/bu3ESosOdy
— Shannon Watts (@Shannon Watts) 1538069404.0