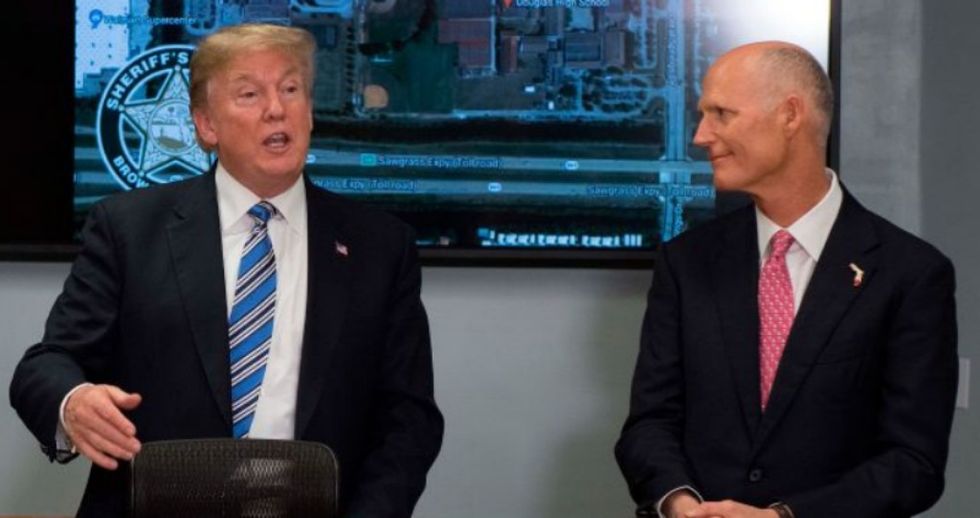 Heading into November's midterm elections, Republican candidates face a question of whether to fully embrace President Donald Trump or to distance themselves from him. Two Florida GOP candidates decided a little distance was necessary from Trump's recent claims concerning the aftermath of Hurricane Maria and Puerto Rico.

Governor Rick Scott, who is also running for U.S. Senate this year, tweeted a pointed disagreement with Trump:

Scott terms out of the Governor's office this year and so challenged incumbent Senator Bill Nelson for his Senate seat. But the Puerto Rican voting bloc in Florida may be critical in achieving that goal. Scott walks a tightrope between his Florida voters and the highest ranking member of the GOP, President Trump.

Also looking to split from Trump is the man who hopes to take over from Scott in the Governor's mansion, Republican Ron DeSantis. DeSantis—a former member of the US House of Representatives—faces Democratic gubernatorial candidate Andrew Gillum in November.

Instead of taking to Twitter, DeSantis issued a statement through his campaign which made no direct reference to the President.

"Ron DeSantis has always worked to help the Puerto Rican community, both on the Island and here in Florida. He doesn’t believe any loss of life has been inflated. Ron is focused on continuing to help our Puerto Rican neighbors recover and create opportunities for those who have moved to Florida succeed."

DeSantis previously received an endorsement from Trump on Twitter.

As did Governor Rick Scott.

Rick Scott of Florida is doing a fantastic job as Governor. Jobs are pouring into the State and its economic health… https://t.co/A08RenlEwq
— Donald J. Trump (@Donald J. Trump) 1535390360.0

By Thursday afternoon, Trump had yet to respond to either Florida candidate's statements, although one suspects he is likely to do so.

The President struck back at Republicans like Senator Jeff Flake of Arizona, Bob Corker of Tennessee and the late John McCain when they criticized him. Trump's supporters also attacked the Senators online.

Both Corker and Flake previously announced their retirements before splitting from Trump. Fewer GOP members actively running for office choose to openly oppose the President.

However Scott launched a new ad campaign that suggests just that without outright stating it.

In the ad—released on social media and TV—Scott vows to go to Washington DC and "Give ‘Em Hell." The them to which Hell will be given is up for individual interpretation.

Puerto Ricans may be a key voting bloc during the 2018 midterms in Florida. Following Hurricane Maria, thousands of Puerto Ricans moved to the state.

@ScottforFlorida Looks like Rick is trying to appeal to those Puerto Ricans that relocated to Florida after hurrica… https://t.co/itCvKUP2Yz
— #DonTheCon (@#DonTheCon) 1536854764.0

@ScottforFlorida @rusingram @POTUS uh-huh... In your mind you're thinking that you danced around like Fred Astaire… https://t.co/XeRFqaB7Ij
— Chet Powell (@Chet Powell) 1536856126.0

@ScottforFlorida @POTUS It must be election time & Scott needs our votes so he comes out of the shadows. He visited… https://t.co/k6YbsrSzVP
— Raj anketell (@Raj anketell) 1536857199.0

@ScottforFlorida @POTUS This coming from someone who refuses to accept that global warming is real. Even refuses to… https://t.co/Fli8bBEnmo
— Rob Hafner (@Rob Hafner) 1536861799.0