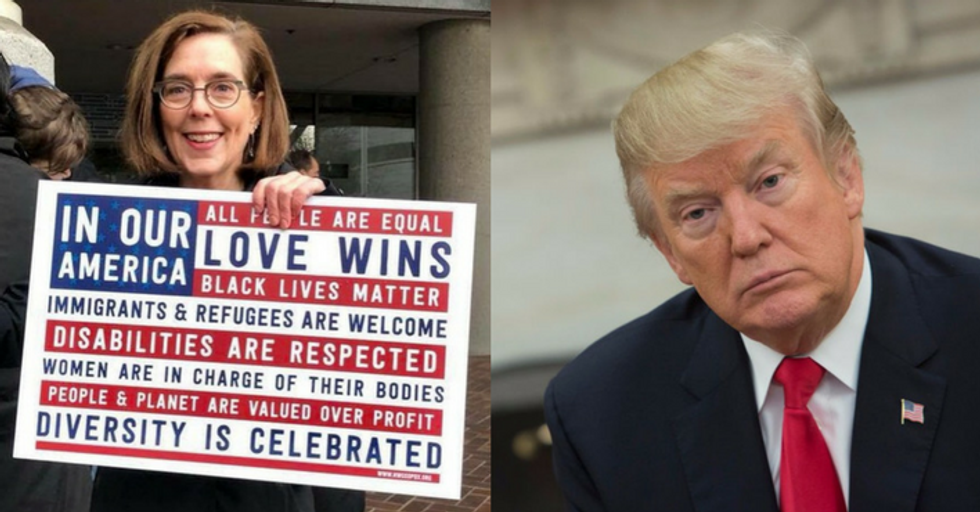 On Wednesday, President Donald Trump signed a memorandum authorizing the deployment of Army National Guard forces to the United States border with Mexico. It is the latest variation on his campaign promised border wall.

The president struggled to secure funding for his wall, which is opposed by the majority of Americans.

He also proved unable to deploy active duty military to cover his campaign promise due to more pressing concerns facing the U.S. military.

During his presidential campaign, Trump famously claimed Mexico would pay for his border wall. Mexico unequivocally declined the request.

Out of options and desperate for a solution to a major campaign promise over a year after taking office, the president decided to deploy the National Guard.

However, each state maintains their own guard. While some governors have stated support for the president's memo, not everyone is on board.

Oregon Governor Kate Brown says her answer is 'no'.

Employing Trump's favorite form of communication, the Democratic governor of Oregon made her views clear in a series of Tweets from her official Twitter account.

If (President Trump) asks me to deploy Oregon Guard troops to the Mexico border, I’ll say no. As Commander of Oregon’s Guard, I’m deeply troubled by Trump’s plan to militarize our border."

"There’s been no outreach by the President or federal officials, and I have no intention of allowing Oregon’s guard troops to be used to distract from his troubles in Washington."

However, several Republican governors Tweeted their support for the president's plan to use their guard at the U.S. Mexico border.

But not all Americans are showing the same support.