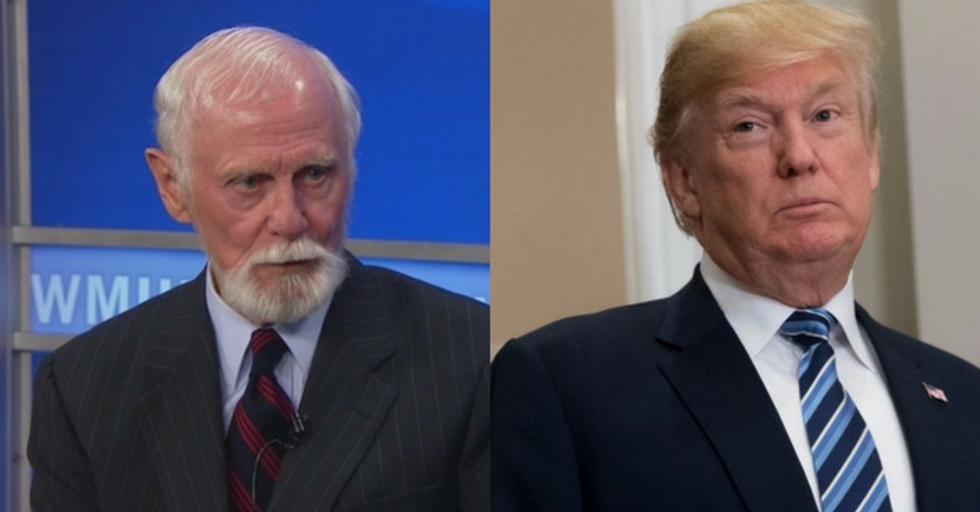 Former Republican Senator Gordon Humphrey minces no words when it comes to his perception of the fitness of Donald Trump to be president.

Humphrey went so far as to endorse Hillary Clinton in the 2016 election after Trump won the Republican Party nomination.

In a recent interview on MSNBC's "All In With Chris Hayes", Humphrey gave another detailed list of his concerns regarding the president's conduct while in office. He also called out his former colleagues and Republican Party members for enabling that behavior.

"The talk about comparing nuclear buttons, whether there was sexual innuendo in that or not was just outrageous... I mean... you don't... The president apparently has no understanding of what a nuclear war would be like," Humphrey stated.

This is extremely dangerous. The man is irrational. He's an ignoramus. He's totally unequipped and unprepared for the office. He's incurious, unread... and on top of that he's a man of depraved character and probably mentally ill. I mean delusional. He makes up his own reality, and believes it. "

These Twitters! We've got two years now of evidence the man is weird, bizarre, not of sound mind. He's surely mentally ill to some degree. Precisely what that diagnosis might be is really immaterial because it's the effect that counts and the president is undermining the national institutions that are of such great value to us."

The First Amendment, Freedom of Speech and Freedom of the Press to name the most important. And he's endangering national security with all his saber rattling and comparison of his nuclear button with that of the North Korean dictator."

It's outrageous and it's very dangerous."

In August, Humphrey urged his state's congressional delegation to use the powers of the 25th Amendment to have President Trump removed from office. In a letter to Representative Ann McLane Kuster, he wrote supporting a bill to assess Trump's mental fitness.

"President Trump's threat to rain down 'fire and fury' on North Korea is like pouring gasoline on a fire," Humphrey wrote. "It's crazy."

"Donald Trump is seriously sick. He is dangerous. As a citizen, former U.S. Senator, and twelve-year member of the Armed Services Committee, I urge you to act [at] once.

Donald Trump should be relieved of the powers of the presidency at the earliest date... His sick mind and reckless conduct could consume the lives of millions."