The GOP Lost in NC. Now They're Changing the Rules in Another "Special Session."

North Carolina Republicans who control the General Assembly called a surprise special session to present bills designed to strip power from the newly progressive governor and state Supreme Court amid heated ideological battles in the state.

Initially, the Republican majority came back to the General Assembly to mull over measures regarding disaster recovery and dealing with victims of hurricane flooding and wildfires in the western part of the state. Their call for another special session surprised Democratic lawmakers––it was then that they introduced bills to end the governor's control over election boards, to require State Senate approval of the new governor’s cabinet members, and to remove his power to appoint University of North Carolina trustees. Republicans also proposed a measure which would substantially reduce the number of state employees who serve at the governor's leisure. According to Jeff Tiberii, a political reporter with WNYC, there are 1,500 positions within the administration; the proposal would cut that number to a mere 300.

Lawmakers barred the public from witnessing the session yesterday after the Assembly decided to close the House and Senate galleries, arrest protesters, and detain Joe Killian, a reporter with North Carolina Policy Watch.

Authorities arrested those who refused to leave on charges of trespassing.

Officers also barred the media from the basement where arrestees were being processed.

The current governor, Pat McCrory, officially conceded last week after a heated governor's race and a monthlong challenge of the vote (there was no evidence to substantiate allegations of voter fraud across the state). Republicans held on to supermajorities in both chambers, however, and Democratic leaders have accused Republicans of trying to undo the election results.

“This is an unprecedented, shameful and cowardly power grab from the Republicans,’’ said Jamal Little, a spokesman for the state’s Democratic Party. “After losing the governor’s office, the G.O.P.-controlled General Assembly is attempting to hold on to power that voters took away from them.”

Governor-elect Roy Cooper also rebuked the GOP's actions, and in a public address, said that their "partisan power grab is more ominous... I have offered to work with the Republican leadership, and I'm even ready to negotiate compromises if I think the result will make life a little bit better for everyday North Carolinians... Instead, what's happening now, they look like partisan political games, but the result could hurt North Carolinians."

But David Lewis, a Republican leader in the House, defended the moves, saying that Republicans would “work to establish that we are going to continue to be a relevant party in governing the state.”

In March, the North Carolina legislature passed a bill that overturns local gay and transgender protections in a special one-day session that cost taxpayers approximately $42,000. Governor McCrory signed the bill into law mere hours after its introduction. The bill was a direct response to a prior nondiscrimination ordinance in the city of Charlotte,

which had offered a wide range of protections. Most notably, the Charlotte ordinance allowed citizens to use the restroom that best matches their gender identity. State lawmakers acted ostensibly out of concern that women and children could be victimized by sexual predators posing as transgender to enter women’s restrooms.

The Tar Heel State received almost immediate condemnation as state and local governments around the country began to weigh in. The governors of New York,Washington and Vermont halted most official state travel to North Carolina in response. The mayors of New York, San Francisco and Seattle imposed similar bans. Business leaders vowed to relocate their company headquarters and entertainers resolved not to perform in the state until the law is repealed. 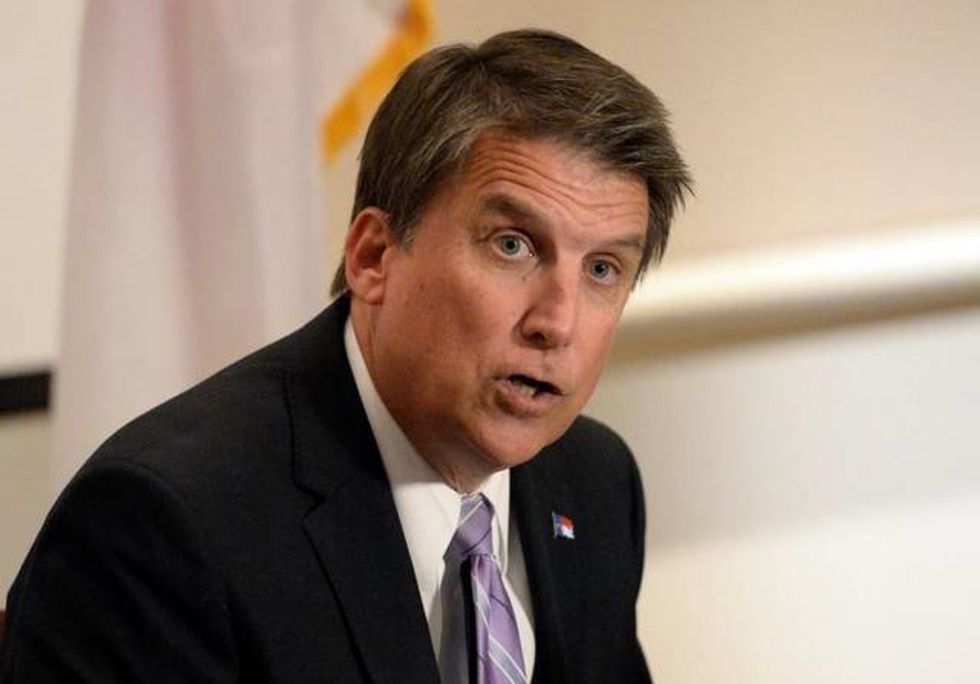 The Department of Justice sent letters to both North Carolina Governor Pat McCrory and North Carolina’s university leaders alerting them that the so-called "Bathroom Bill" violates the U.S. Civil Rights Act. The state filed a lawsuit against the DOJ in response, accusing the federal government of overreach and arguing that Title VII does not recognize transgender status as a protected class. “If the United States desires a new protected class under Title VII, it must seek such action by the United States Congress,” the suit said in part. It lists Governor Pat McCrory and other state officials as plaintiffs. HB2 is still in effect.

"Federal courts this year have also struck down boundaries––political boundaries––both state legislative districts and also congressional maps because they describe them––they ruled that they were a legal racial gerrymander," says Jeff Tiberii. "So at the heart of this, this is really about who's going to control the state––Republicans or Democrats and where some of these powers lie, whether it's the legislative branch or the executive branch."

Trump's allies have railed against both articles, but the obstruction of Congress charge has come under particular focus.

During its initial investigation, the House committees overseeing impeachment requested documents and witnesses from the White House, the State Department, and the Office of Management and Budget that would help get to the bottom of just what the deal was with Ukraine's foreign policy.

When they denied the House's request, the House subpoenaed the departments for the evidence. Claiming executive privilege, their subpoenas went ignored.

Democratic Congressman Masterfully Quotes The Notorious B.I.G. in Speech During Trump's Impeachment Trial and People Were Here for It

House Impeachment Managers and President Donald Trump's defense team debated the rules for the ongoing impeachment trial in the Senate. The proceedings lasted for 13 hours and went on until around 2 o'clock in the morning.

Hours into the debate, Congressman Hakeem Jeffries (D-NY) responded to a rhetorical question from Trump attorney Jay Sekulow, who had asked "Why are we here?"

It led to a mic drop moment for Jeffries.

This past December, the House Judiciary Committee held a hearing where it heard from constitutional scholars and legal experts as to whether President Donald Trump's pressure on Ukraine to open politically beneficial investigations warranted impeachment.

Pat Cipollone has served as the current White House Counsel for President Donald Trump since December 2018.

In the current political landscape of the United States, you'd be hard-pressed to find any issue that Americans on which both sides of the ideological spectrum agree.

But it turns out that even on an issue as divisive as the impeachment of President Donald Trump, Republicans and Democrats agree on something.