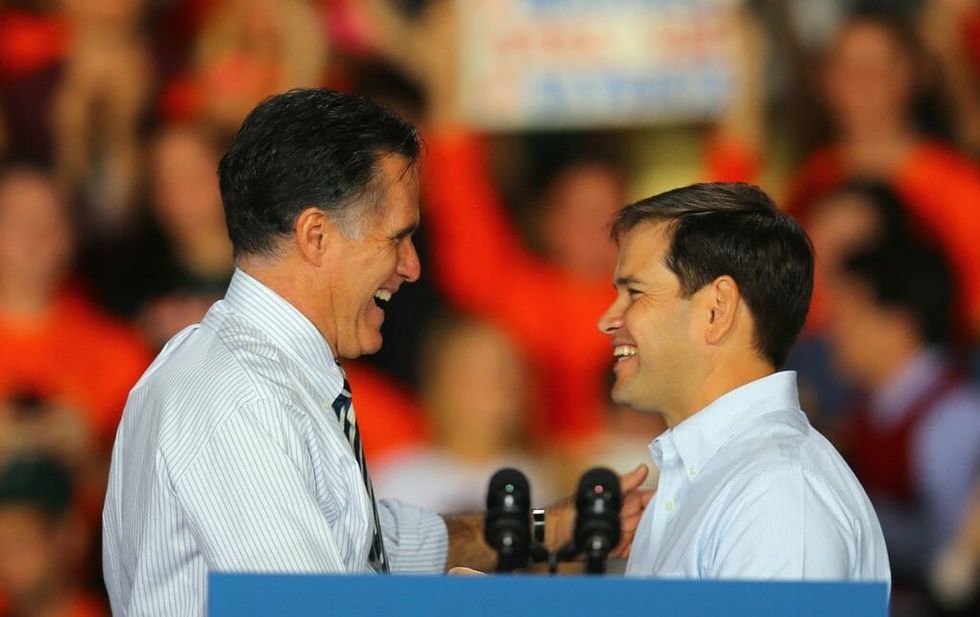 Mitt Romney and Senator Marco Rubio in 2012, who both benefited from campaign support from Al Hoffman Jr. (Photo by Joe Raedle/Getty Images)

Al Hoffman Jr., a Florida based real estate developer and major Republican backer, sent thousands of letters to his fellow GOP donors to recruit more clout for his effort to enact new gun laws in the wake of the Parkland school shooting. And Republicans should take notice.

Hoffman commands attention within the Republican Party. He served as finance chairman for the Republican National Committee and on the presidential campaigns of Mitt Romney, Senator Marco Rubio and several members of the Bush family.

President George W. Bush made him the ambassador to Portugal. Hoffman remains one of the GOP's most prominent donors.

But after the mass shooting in Hoffman's home state, his status as a major GOP donor may change. The attack at Marjory Stoneman Douglas High School left 17 dead. The school in metropolitan Miami is not far from Hoffman's home in Palm Beach, Florida.

Hoffman vowed to withdraw all monetary or other support from any candidates or groups who fail to endorse renewing the ban on assault weapons. These kind of firearms were employed in almost every recent mass shooting.

In an interview with MSNBC, Hoffman stated:

I thought 'What can I do?' and finally a good friend said, 'Why don’t you start withholding checks until you find somebody who will support the advocacy for a gun legislation?'"

Al Hoffman Jr., former National Finance Chairman for RNC, told GOP he will no longer support them until they take a… https://t.co/BgfAjzzOnp
— Gamora ✌🇺🇸 (@Gamora ✌🇺🇸) 1518987234.0

Republicans have drawn criticism since the Parkland shooting over legislation that relaxed regulations on gun sales to the mentally ill, their history of donations from the National Rifle Association, and their response to this and other mass shootings. However Hoffman's campaign marks the first major push from within their own party.