Chair of the Republican Party Just Said That D-Day Should Be About Celebrating Trump, and Twitter Made Her Regret It 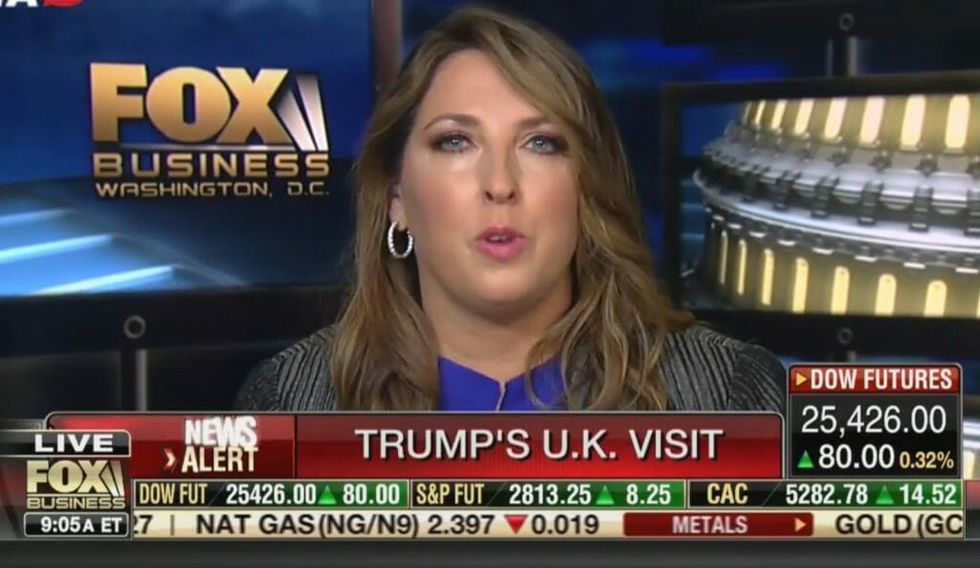 Fox Business FoxFor most people around the world, a commemoration of D-Day is a remembrance of the sacrifices made and lives lost during the largest seaborn invasion in history that began on June 6, 1944. However for Ronna McDaniel, chair of the Republican National Committee which oversees the Republican Party or GOP, this 75th anniversary of Operation Overlord and the Normandy Beach landings should focus elsewhere.

In an interview on Fox Business, McDaniel stated:

"We are celebrating the anniversary, 75 years of D-Day."

"This is the time where we should be celebrating our President, the great achievements of America, and I don't think the American people like the constant negativity."

The organization she heads endorsed her comments by sharing them and the interview clip on the  GOP's official Twitter account.

The Normandy invasion of 1944 was a massive push by Allied Forces to defeat the remaining Axis power of Nazi controlled Germany in Europe. Italy surrendered the prior year in September of 1943.

Casualties were high for all involved.

So many took offense over McDaniel's suggestion that for D-Day commemoration, people in the United States should celebrate and focus on President Donald Trump.

The GOP spokeswoman says the 75th anniversary of D-Day is when we should be "celebrating our president." Trump avo… https://t.co/AwadT8eS8V
— Brian Tyler Cohen (@Brian Tyler Cohen) 1559781235.0

@gtconway3d @GOPChairwoman Their stories. That day. And the story of the remarkable military campaign that followed… https://t.co/l5LtxAXqoO
— Casey Nikoloric (@Casey Nikoloric) 1559785183.0

Neither the President's father nor grandfather served in the military, for any side, during either WWI or WWII. The President himself was born almost two years to the day after D-Day, on June 14, 1946.

In an interview with Piers Morgan—filmed for his state visit to the United Kingdom—aired before attending the D-Day commemoration, President Trump explained why he never spent time in a military uniform either, despite eligibility from 1964 to 1972. Trump stated:

"I was never a fan of that war, I’ll be honest with you. I thought it was a terrible war; I thought it was very far away. You’re talking about Vietnam at that time—nobody ever heard of the country."

His comments are causing many to question his medical disqualification and academic deferments.

@JMillerBarron @GOP @GOPChairwoman Like Memorial Day, it's a solemn day of remembrance, not a frolicsome celebratio… https://t.co/WBpHLShZcL
— Carla (@Carla) 1559751921.0

But many wanted people to remember who D-Day should be about.

As we recognize D-Day, we must remember the bravery of soldiers like Tom from California, whose actions eventually… https://t.co/A8Fveh9629
— Kamala Harris (@Kamala Harris) 1559833570.0