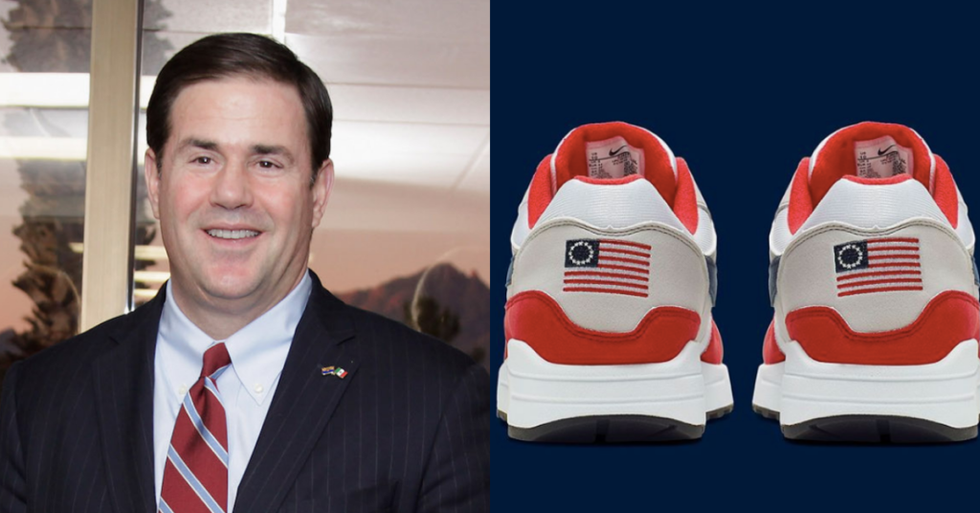 Different symbols mean different things to different people. Unfortunately, a symbol can become coopted to represent hate. So it was with the swastika, a symbol once used in Asia and the Americas but largely abandoned after becoming the emblem of the Nazi party in the early 20th century.

White supremacists in the United States also coopted symbols as emblems of their hate groups. One such symbol is the "Betsy Ross" flag. Created around the time of the American Revolution, it is now used as a symbol by some White supremacists like the Confederate battle flag.

When Nike designed an Independence day shoe, they incorporated the Betsy Ross flag. However a number of activists in the civil rights movement, including Nike spokesperson Colin Kaepernick, alerted Nike to the flag's ties to White supremacy.

Nike made the decision to pull the shoe from stores.

Update: release is indefinitely postponed. Retailers are being asked to return the shoes to Nike. Celebrate the upcoming #IndependenceDay holiday with these Air Max 1s featuring the flag sewn by Betsy Ross. For a closer look at this upcoming release, tap the link in our bio.

Not everyone responded favorably to Nike's decision.

Republican Governor Doug Ducey of Arizona went as far as removing his state from consideration for a new Nike facility. In a series of Twitter posts, Ducey explained his decision.

Words cannot express my disappointment at this terrible decision. I am embarrassed for Nike. 3/
— Doug Ducey (@Doug Ducey) 1562058115.0

Instead of celebrating American history the week of our nation’s independence, Nike has apparently decided that Bet… https://t.co/KqWRJqFOL6
— Doug Ducey (@Doug Ducey) 1562058209.0

It is a shameful retreat for the company. American businesses should be proud of our country’s history, not abandoning it. 6/
— Doug Ducey (@Doug Ducey) 1562058262.0

Nike has made its decision, and now we’re making ours. I’ve ordered the Arizona Commerce Authority to withdraw all… https://t.co/MSZeGMUQXG
— Doug Ducey (@Doug Ducey) 1562058294.0

Arizona’s economy is doing just fine without Nike. We don’t need to suck up to companies that consciously denigrate our nation’s history. 8/
— Doug Ducey (@Doug Ducey) 1562058329.0

People pointed out why Nike made the decision they did.

@dougducey @Nike Wait, in a free enterprise system a private company can choose to do as it likes. Ignoring the ful… https://t.co/0gDAJlreeP
— Jeanine Jones (@Jeanine Jones) 1562059989.0

@Pablo_1791 @dougducey @Nike Acknowledging a flawed history and pointing out a promotion of a white wash of such is… https://t.co/TgqZByUGTC
— Jeanine Jones (@Jeanine Jones) 1562063157.0

@dougducey @Nike So your punishing Nike and the people of the area who would have benefited because an American com… https://t.co/KkqScOtERz
— sarah glatz (@sarah glatz) 1562068996.0

@dougducey @Nike Your loss. Nike sales will skyrocket and once again the GOP/ trump sycophants are on the wrong sid… https://t.co/olw3XBewpS
— DeniseMichelleD (@DeniseMichelleD) 1562069729.0

If you’re going to tweet about the Betsy Ross Flag, make sure you include this part: “It has been appropriated by s… https://t.co/y9wLHCOlcJ
— Shannon Watts (@Shannon Watts) 1562029635.0

Governor Ducey was not alone in trying to curry political favor by criticizing Nike's decision.

Neither Nike nor the man being blamed by conservatives, Colin Kaepernick, has yet addressed the controversy.

To learn more about the mindset of White supremacy, the book Rising Out of Hatred: The Awakening of a Former White Nationalist, is available here.