Rudy Giuliani Just Beat Out Brett Kavanaugh for Quote of the Year, and We See Why 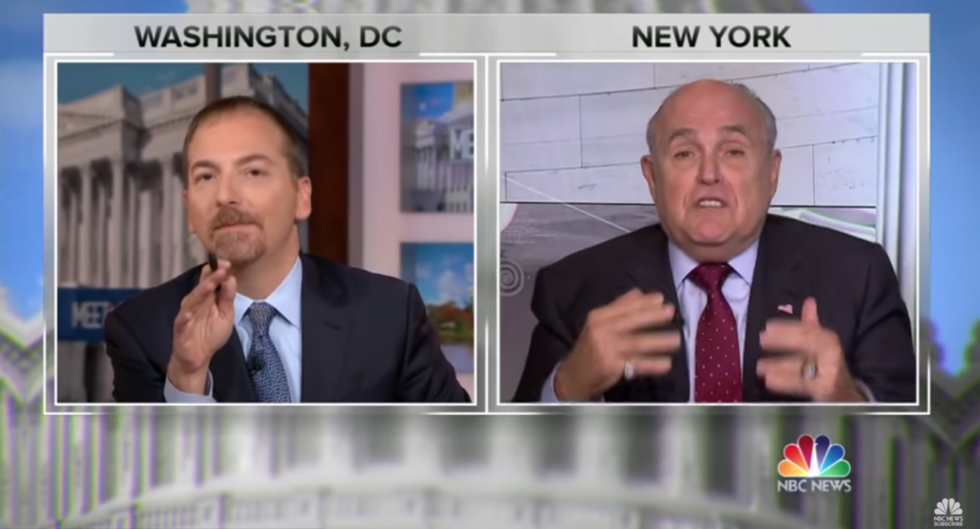 Chuck Todd and Rudy Giuliani in an episode of NBC's "Meet the Press" in August 2018. (NBC News/YouTube)

Back in August of this year President Donald Trump's personal lawyer Rudy Giuliani appeared on NBC's Meet the Press. In an interview with Chuck Todd, things went a bit sideways. The two men were discussing if Trump should speak to Special Counsel Robert Mueller.

"And when you tell me that, you know, he should testify because he’s going to tell the truth and he shouldn’t worry, well that’s so silly because it’s somebody’s version of the truth. Not the truth..."

And while Giuliani was roundly mocked for his comment and it did become a bad meme, why bring it up in December?

The end of the year is the time to reflect on all events of that year. And Giuliani's statement of 'Truth isn't truth' was deemed worthy of winning the top quote of 2018 by Yale Law School librarian Fred Shapiro.

Each year since 2005, Shapiro—author of The Yale Book of Quotations—picks a top 10 best. This year the competition was stiff, but Giuliani came out on top. Shapiro's book of famous and infamous quotes covering a wide range of topics and eras in history can be purchased here.

Remarking on why he chose Giuliani's comment out of all of the contenders, Yale's Shapiro stated:

"I think perhaps the most striking development in our current zeitgeist is a dramatic decline in respect for truth in politics, and this quote fits nicely into that narrative. I thought it was a very representative quote of our times."

In selecting his quotes, Shapiro chooses those he feels best represent the spirit of that year. In an age where multiple publications track the lies told by the President of the United States, "truth isn't truth" seemed the perfect fit.

Shapiro, who has drawn sports and entertainment as well as politics in the past found this year's list dominated by politics. He added:

The Associated Press published the following full list on Tuesday.

A quote from the confirmation hearing for Trump's Supreme Court pick Brett Kavanaugh came a close second to Giuliani for its absurd nature considering the venue and the audience for the comment: the Senate Judiciary Committee.