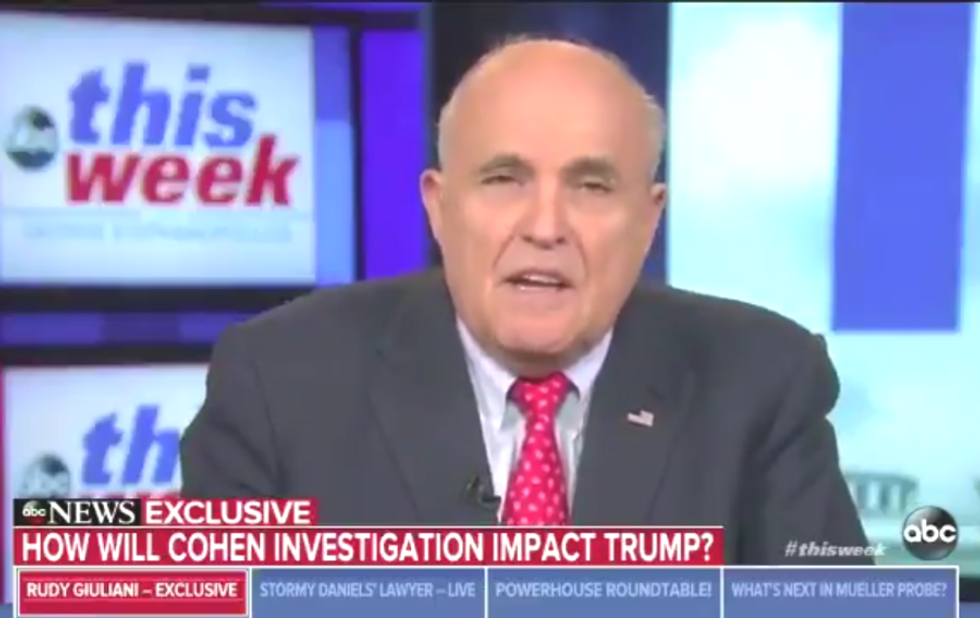 Rudy Giuliani appears on ABC News "This Week" with George Stephanopoulos on May 6, 2018. (@abcnews/Twitter)

On Thursday, President Donald Trump's personal lawyer, Rudy Giuliani appeared on CNN's Cuomo Prime Time and stated that Michael Cohen, Trump's former personal lawyer, had "lied all his life." But in May, Giuliani stated in an ABC News interview with George Stephanopoulos that Cohen was "an honest, honorable lawyer."

Thursday, host Chris Cuomo asked the president's mouthpiece about the recently released information on tapes Trump's former fixer —Cohen— recorded and any future revelations that might be on the over 100 other tapes.

To begin, Cuomo showed a headline and stated,

"Sources with knowledge of the situation tell CNN the president's former lawyer, Michael Cohen, says he may tell Robert Mueller the president knew about that Trump Tower meeting with a possible Russian agent, that he supported it, and that he therefore lied about what he knew thereafter."

Cuomo then brought out Giuliani and after asking for the President's lawyer and spin doctor to comment on the headline, Giuliani stated,

"I expected something like this from Cohen. He's been lying all week, I mean —or for two— he's been lying for years. I mean, the tapes that we have demonstrate any number of very serious lies by him back a year and a half ago, including his fooling people, hiding tape recordings, telling them they weren't recorded, lying to their face, breaking faith with them, taping his client, which is a disbarable offense."

There's nobody I know that knows him that hasn't warned me if his back is up against the wall, he'll lie like crazy because he's lied all his life."

But back on May 6, 2018, Giuliani sang a very different tune in his appearance on ABC's This Week with George Stephanopoulos. According to the official ABC News transcript of the interview, Stephanopoulos asked:

"Are you concerned at all that Michael Cohen’s going to cooperate with prosecutors?"

No. I expect that he is going to cooperate with them. I don’t think they’ll be happy with it because he doesn’t have any incriminating evidence about the president or himself. The man is an honest, honorable lawyer."

Watch the video of the interview excerpt here.

In an ironic twist, the Stephanopoulos interview concerned contradictory statements made by Giuliani and Trump, not any contradictions coming from Cohen.

In his Thursday interview with Cuomo, Giuliani says one must choose which version of events from Cohen to accept as truth, but in the following excerpt from the transcript of the May interview, the same can be said of Giuliani and Trump.

Giuliani appeared on This Week on May 6 to clarify direct contradictions between statements he made to the press versus statements made by the President. Giuliani claimed in an interview earlier in the week that Trump knew about the $130,000 payment to Stephanie Clifford and reimbursed Michael Cohen for it.

But at the time, the President still denied any knowledge. That story has evolved several times and Trump now admits to knowing about the payment and repaying Cohen.

Back in May, Giuliani claimed he misspoke —not the President— because he was so new to the legal team and didn't know all the facts yet. But since then, it is Trump's version of the story that changed.

In that same May interview, Giuliani again claimed he was confused and not yet up to speed. But since then the repayment became a fact accepted and supported by both Giuliani and the President.

Trump's PR man wants everyone to discredit anything coming from Michael Cohen, including anything on the legally recorded tapes —New York state law allows conversations to be taped if one party is aware of the recording.

But based on the interview in May, the only ones with a serious credibility problem are Rudy Giuliani and Donald Trump. In the words of Giuliani himself, "which lie do you want to pick? You want to pick the first lie, the second lie, or maybe some new lie?"