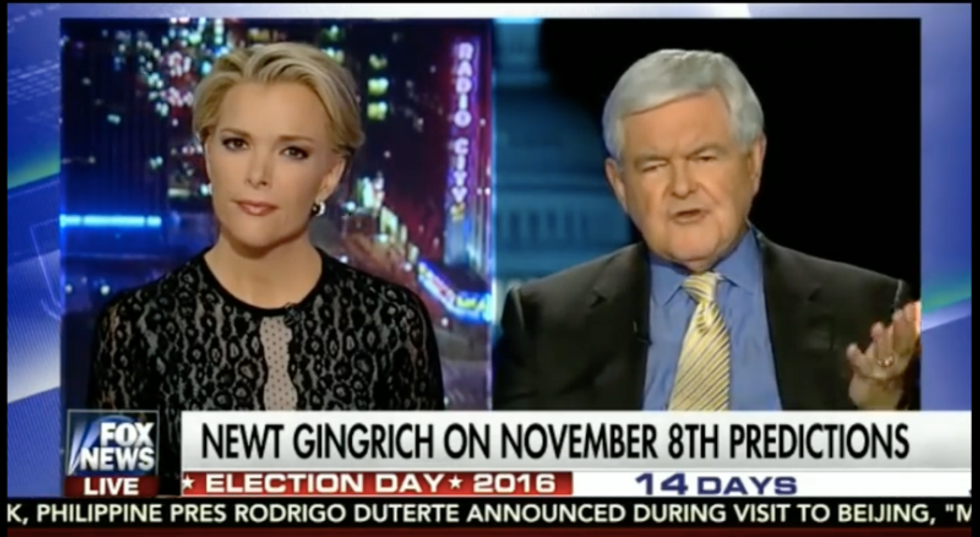 Former Speaker of the House Newt Gingrich sparred with Megyn Kelly on Fox News last night after she brought up the sexual assault allegations against Donald Trump and questioned whether Trump is a "sexual predator." Gingrich, who has openly chastised the Republican nominee for his often violent rhetoric and his incendiary campaign tactics, jumped to Trump's defense.

GINGRICH: I’m sick and tired of people like you using language that’s inflammatory and not true.

KELLY: Excuse me, Mr. Speaker, you have no idea if it [the allegations] are true or not.

GINGRICH: Neither do you.

KELLY: That's right, and I'm not taking a position on it.

GINGRICH: Oh, yes, you are. When you used the words, you took a position... I think that is exactly the bias people are upset by.

KELLY: I think your defensiveness on this may speak volumes, sir.

At this point, Kelly noted that Trump managed on his own to keep allegations of sexual misconduct by what are now 11 separate women front and center in the final weeks of the election. She based this on a leaked Access Hollywood videotape from 2005 in which he appeared to advocate and admit to sexual assault. “As a media story, we don’t get to say that 10 women are lying. We have to cover that story, sir,” the Fox anchor said.

In response, Gingrich questioned the stories of the women, accused the media of being biased against the Republican nominee and suggested that the relative importance of the controversy pales in comparison to Hillary Clinton's alleged transgressions.

GINGRICH: Sure. Okay. So, so it’s worth 23 minutes of the three networks to cover that story, and Hillary Clinton had a secret speech in Brazil to a bank that pays her 225,000 [dollars], saying her dream is an open border where 600 million people could come to America––that’s not worth covering...

KELLY: That is worth covering, and we did.

GINGRICH: … I mean, you want to go back through the tapes of your show recently, you are fascinated with sex, and you don’t care about public policy.

A visibly stunned Kelly glanced up and past the camera before continuing.

KELLY: You know what, Mr. Speaker, I’m not fascinated by sex. But I am fascinated by the protection of women, and understanding what we’re getting in the Oval Office.

GINGRICH: And, therefore, we’re going to send Bill Clinton back to the East Wing, because after all, you are worried about sexual predators.

KELLY: Yeah, listen, it’s not about me. It’s about the women and men of America. And the poll numbers show us that the women of America, in particular, are very concerned about these allegations and, in large part, believe that they are a real issue.

The news segment went further downhill from there, with Gingrich childishly "daring" Kelly to call Bill Clinton a sexual predator on live television. "I just want to hear you say it," he said, smiling. He attempted to divert attention by claiming that Clinton was disbarred and fined over his actions in the Monica Lewinsky scandal (not entirely true; in fact, Clinton only had his license suspended). Kelly did not take the bait. She defended her reporting, noting that she has, in fact, covered the sexual assault allegations against Clinton.

KELLY: Excuse me, sir. We on The Kelly File have covered the Clinton matter as well... but he’s not on the ticket. And the polls also show that the American public is less interested in the deeds of Hillary Clinton’s husband than they are in the deeds of the man who asks us to make him president, Donald Trump. We’re going to have to leave it at that, and you can take your anger issues and spend some time working on them, Mr. Speaker. Thanks for being here.

The spat symbolizes an increasingly nasty campaign where personal insults and sideshows dominate, and how Americans are universally fatigued by the election. Trump has yet to comment, but his social media manager issued a rather ominous response.

.@MegynKelly made a total fool out of herself tonight- attacking @realDonaldTrump. Watch what happens to her after this election is over.
— Dan Scavino (@Dan Scavino) 1477446940.0

Trump and Kelly have had an infamously volatile relationship. Last year, after Kelly brought up derogatory remarks Trump has made about women, Trump lashed out on CNN, saying that Kelly had "blood coming out of her eyes, blood coming out of her wherever." Trump later backtracked on the comment, tweeting that he was referring to her nose.