Democratic Candidate For Governor Went After His Republican Rival for Not Disavowing His Racist Supporters, and the Video Clip Just Went Viral 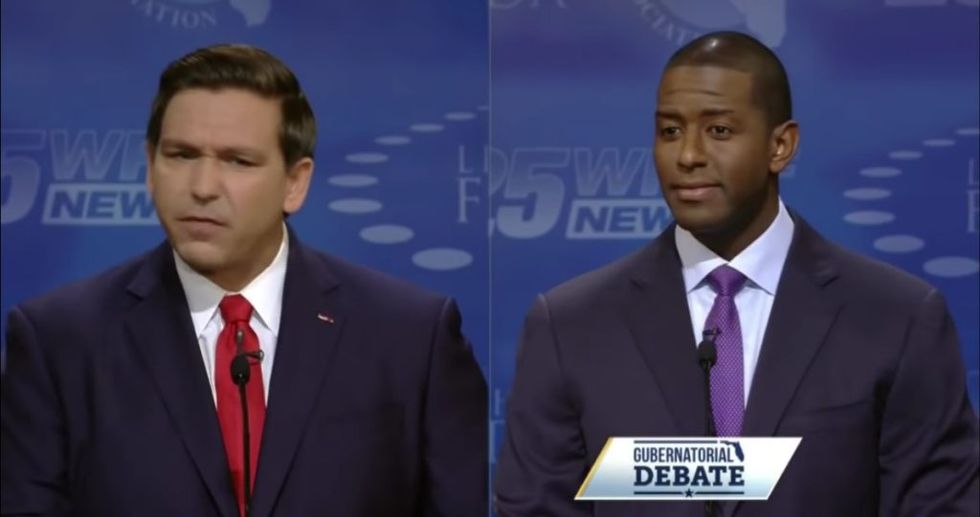 During an at times explosive debate between Florida gubernatorial candidates, Republican Ron DeSantis defended his ties to White supremacists, but Democrat Andrew Gillum came back with his Grandmother's words in rebuttal.

The moderator—Todd McDermott—outlined the criticism aimed at DeSantis regarding his ties to different known White supremacists, but before the moderator could get to his question, DeSantis interrupted him.

DeSantis asked "how the Hell" he was supposed to know every single statement someone made in response to quotes McDermott read from an organization DeSantis aligned himself with on several occasions. The GOP candidate went on to list his credentials as proof of his character.

After DeSantis finished, his Democratic challenger got his chance to respond. Gillum said:

"As my grandmother used to say, ‘A hit dog will holler,' and it hollered through this room."

The colloquial phrase is a regional version of Shakespeare's more recognized phrase from Hamlet: "the lady doth protest too much, methinks." The meanings are the same; the more vehement the denial, the more believable the accusation.

As McDermott did before him, Gillum outlined additional ties between DeSantis and White supremacists, including some aiding with his campaign. Gillum ended his response by stating:

Gillum shared his rebuttal on his Twitter feed Wednesday night after the debate. Watch his full rebuttal here.

@AndrewGillum I feel really good about voting for Gillum, he is just the leader Florida wants and needs. #VoteDem… https://t.co/xFYDqcbDEa
— Shayna (@Shayna) 1540440967.0

@AndrewGillum @BenCrossbones Holy shit how do you even continue living when someone hands you an L with that much force. Oh my lord.
— Marc Skellington (@Marc Skellington) 1540442318.0

@Kearns_SL @AndrewGillum @Shakestweetz I know he was, and when I watched it on the news they were try not to laugh also. But it was great
— Lioness Brooks (@Lioness Brooks) 1540455008.0

More than a few hoped for a White House in the Democrat's future.

Some suggested skipping the Governor's mansion in Florida and heading straight to Washington DC.

@AndrewGillum Bravo Andrew Gillum, bravo! A masterful performance in the debate and may you shine brightly in politics for decades to come.
— Tomi T Ahonen (@Tomi T Ahonen) 1540453352.0

But one person pointed out that good debate skills and sound policies count for nothing if people do not go to the polls and support the candidate.

@CatLadyLC @AndrewGillum People have to vote for him though. This is all good, it sounded cool, and looked priceles… https://t.co/IisK6CtCKk
— Clark McMillian (@Clark McMillian) 1540470249.0

You can watch the full exchange between McDermott, DeSantis and Gillum here.