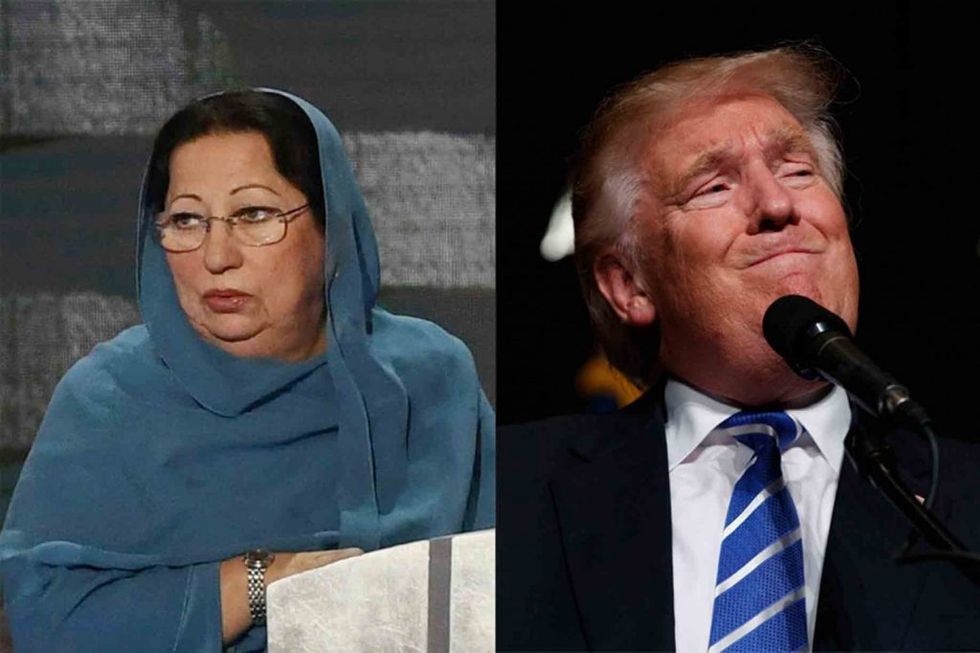 “When Donald Trump is talking about Islam, he is ignorant,” wrote Ghazala Khan in a scathing Washington Post op-ed published yesterday morning. “If he studied the real Islam and Koran, all the ideas he gets from terrorists would change, because terrorism is a different religion. Donald Trump said he has made a lot of sacrifices. He doesn’t know what the word sacrifice means.”

Ghazala Khan’s op-ed served as a response to Trump’s remarks on the Khans, the parents of a Muslim American Army captain slain in Iraq in 2004, following their appearance at the Democratic National Convention in Philadelphia last Thursday evening. In his address, Khizr Khan delivered perhaps the most damning indictment of Donald Trump’s immigration proposals. “Our son Humayun had dreams … of being a military lawyer, but he put those dreams aside the day he sacrificed his life to save the lives of his fellow soldiers,” Khan said. “Hillary Clinton was right when she called my son ‘the best of America.’ If it was up to Donald Trump, he never would have been in America.”

The crowd began to cheer the moment Khan pulled out a pocket-sized copy of the American Constitution. “Donald Trump, you are asking Americans to trust you with their future. Let me ask you: Have you even read the United States Constitution? I will gladly lend you my copy,” he said. “In this document, look for the words ‘liberty’ and ‘equal protection of law.’ Have you ever been to Arlington Cemetery? Go look at the graves of brave patriots who died defending [the] United States of America. You’ll see, all faiths, genders, and ethnicities. You have sacrificed nothing and no one.” Khan received a standing ovation, but Trump soon made headlines for criticizing Ghazala Khan’s silence and implying that she wasn’t allowed to speak. “I’d like to hear his wife say something,” he said at the time.

A number of prominent conservatives have openly admonished Trump for disrespecting the family of a fallen soldier.

Sen. Lindsey Graham went further, questioning Trump’s effectiveness as a leader. “This is going to a place where we’ve never gone before, to push back

against the families of the fallen. There used to be some things that were sacred in American politics — that you don’t do — like criticizing the parents of a fallen soldier, even if they criticize you,” Graham said. “If you’re going to be leader of the free world, you have to be able to accept criticism. Mr. Trump can’t.”

Ohio Gov. John Kasich, who declined to attend the Republican National Convention and garnered attention recently for calling his reluctance to back Donald Trump “something that’s a matter of conscience for me,” came to the Khan’s defense on Twitter.

There's only one way to talk about Gold Star parents: with honor and respect. Capt. Khan is a hero. Together, we should pray for his family.
— John Kasich (@John Kasich) 1469931557.0

Condemnation also rained down from the other side of the aisle. Karen Finney, a senior spokeswoman for the Clinton campaign, did not mince words, calling Trump “truly shameless.”

Trump is truly shameless to attack the family of an American hero. Many thanks to the Khan family for your sacrifice, we stand with you.
— Karen Finney (@Karen Finney) 1469908631.0

Hillary Clinton addressed the controversy in a statement Saturday evening, saying she was “very moved” by Ghazala Khan’s “dignity” at the Democratic National Convention. "This is a time for all Americans to stand with the Khans, and with all the families whose children have died in service to our country,” Clinton said. “And this is a time to honor the sacrifice of Captain Khan and all the fallen. Captain Khan and his family represent the best of America, and we salute them."

In her op-ed, Ghazala Khan explained the reason behind her silence: She was grieving. “It has been 12 years, but you know hearts of pain can never heal as long as we live,” she wrote. “Just talking about it is hard for me all the time. Every day, whenever I pray, I have to pray for him, and I cry. The place that emptied will always be empty… Walking onto the convention stage, with a huge picture of my son behind me, I could hardly control myself. What mother could? Donald Trump has children whom he loves. Does he really need to wonder why I did not speak?”