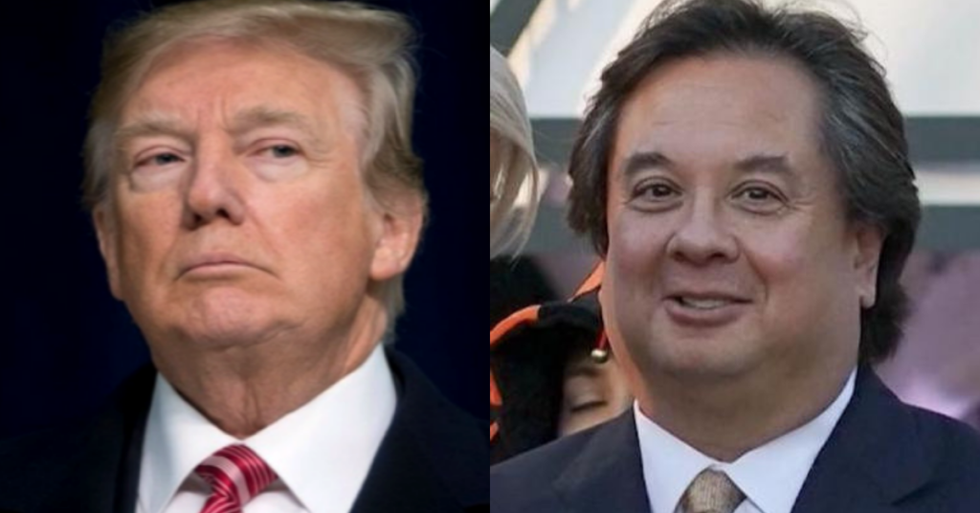 The latest salvo in the feud between President Donald Trump and Republican lawyer and former participant in the investigation by Ken Starr into President Bill Clinton, George Conway, was fired early Thursday morning. As usual, the husband of Trump's Counselor to the President, Kellyanne Conway, did a bit of fact-checking on Trump's latest Twitter boast.

The President quoted Sean Hannity of Fox News Wednesday night while adding a dig at Rachel Maddow of MSNBC and CNN.

"'The President has received glowing reviews from the British Media. Here at home, not so much. MSNBC Ramps up hateful coverage and promotes conspiracy theories during Trump’s trip to Europe.' @seanhannity The good news is that @maddow is dying in the ratings, along with @CNN!"

“The President has received glowing reviews from the British Media. Here at home, not so much. MSNBC Ramps up hatef… https://t.co/ghzKprKIE9
— Donald J. Trump (@Donald J. Trump) 1559800549.0

But George Conway begged to differ with Sean Hannity's assessment that Trump shared. And as usual, he included examples in his fact-check which he began:

"Um, not so much. Your press coverage in the UK wasn't all that great. Let me help you out."

Conway then curated a laundry list of unflattering press from the UK. Like a piece from the Daily Express that called him "creepy"...

...and a Daily Mail article pointing out his protocol faux pas patting the 93 year-old WWII veteran, Queen Elizabeth II. Keeping his hands to himself and inappropriate touching of other world leaders has been a recurrent issue for the President.

Then there was another article from the Daily Express regarding Prince Harry, the Duke of Sussex's perceived reaction to the man who said of his wife, Duchess of Sussex Meghan Markle:

"I didn't know she was nasty."

Other UK papers picked up that story as well.

The Daily Mirror also covered some of the many protests against Trump...

Meanwhile The Guardian pulled no punches when it called Trump "wrong."

And other papers also featured strong criticism for the President.

Some coverage from the British press even attacked the President's style choices.

After sharing the many print examples he found, Conway concluded:

"And this is just a small sample, at least of the print coverage. Haven’t watched any TV, but haven’t heard that any US network parked Baby Trump on its set, as the Beeb did. So hard to say that the British coverage was more favorable to our Embarrassment-in-Chief."

Others had theories for why the President might not actually know what the UK press' reaction to him was.

@realDonaldTrump @seanhannity @maddow @CNN This is what happens when you only pretend to read newspapers, but don't… https://t.co/yFwFooiqKb
— Morten Øverbye (@Morten Øverbye) 1559821161.0

The President left Britain to attend a gathering of world leaders in Normandy, France to commemorate the 75th anniversary of the D-Day invasion in 1944. As the only world leader who is also a WWII veteran, Queen Elizabeth also played a major part in the anniversary commemoration.

Meanwhile the President drew criticism for sitting for a Fox News interview with Laura Ingraham that lasted after the official start time for the ceremony. French President Emmanuel Macron arrived after Trump.

However whether as the host Macron was required to arrive last as a matter of standard protocol and waited for Trump, or was otherwise delayed, is unclear.