Donald Trump Lashed Out at George Conway in the Most Donald Trump Way, and Now Conway Is Trolling Him Hard 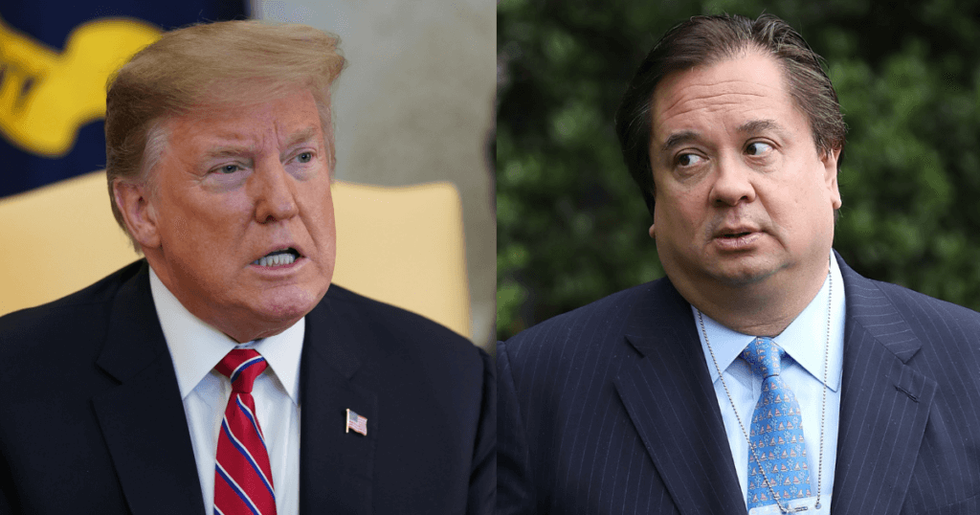 The tit-for-tat began on Monday when Conway warned that Trump's weekend Twitter meltdown was a symptom of psychiatric disorders.

Parscale lashed out at Conway Monday night, accusing him of being "jealous" of his spouse's close relationship with the president.

"We all know that @realDonaldTrump turned down Mr. Kellyanne Conway for a job he desperately wanted," Parscale tweeted. "He barely worked @TheJusticeDept and was either fired/quit, didn’t want the scrutiny? Now he hurts his wife because he is jealous of her success. POTUS doesn’t even know him!"

We all know that @realDonaldTrump turned down Mr. Kellyanne Conway for a job he desperately wanted. He barely worke… https://t.co/0TGE8MtZth
— Brad Parscale (@Brad Parscale) 1552961520.0

"Congratulations! You just guaranteed that millions of more people are going to learn about narcissistic personality disorder and malignant narcissism! Great job!"

Conway's dissent has not convinced everyone, however.

Some within the "resistance" movement believe the Conways are playing both sides.

@gtconway3d @RadioFreeTom this fake little spat is being choreographed by your wife bcs you both saw that there was… https://t.co/Gp9GVahVds
— Cheri Jacobus (@Cheri Jacobus) 1553005678.0

Former GOP operative Cheri Jacobus thinks Conway's criticism of Trump is engineered to appeal to the "never Trump" wing of the Republican Party, which she believes is using Trump to stack the judiciary with right-wing judges like Brett Kavanaugh, who replaced Anthony Kennedy on the Supreme Court last year.

George Conway is the key member who is tasked with pretending to be NeverTrump so he can get some prominent NeverTr… https://t.co/WGmJJsS15O
— Cheri Jacobus (@Cheri Jacobus) 1551456613.0

Jacobus is not alone in her theory.

Jacobus says that the answer is simple: we are all being played.

The Conways are playing you. They are frauds. Trump doesn't attack George because George is working for him, garn… https://t.co/uaRnBanmvx
— Cheri Jacobus (@Cheri Jacobus) 1551458323.0

She may be onto something here. A decade ago, Trump was praising Conway's legal prowess.

The Washington Post published a letter from Trump to the conservative attorney an hour after Trump insulted him.

"I wanted to thank you for your wonderful assistance in ridding Trump World Tower of some very bad people. What I was most impressed with was how quickly you were able to comprehend a very bad situation. In any event, the building has now been normalized, and the employees are no longer doing menial tasks, etc. for our former Board Members."

"PS—And, you have a truly great voice," Trump added, "certainly not a bad asset for a top trial lawyer!”

Nevertheless, the president's declining mental state is becoming more evident every day. And if this is one big joke, Trump is assuredly not in the loop.