Democratic Candidate Just Made a Savage Analogy Between Donald Trump and Pennywise the Clown, and It's Disturbingly Accurate 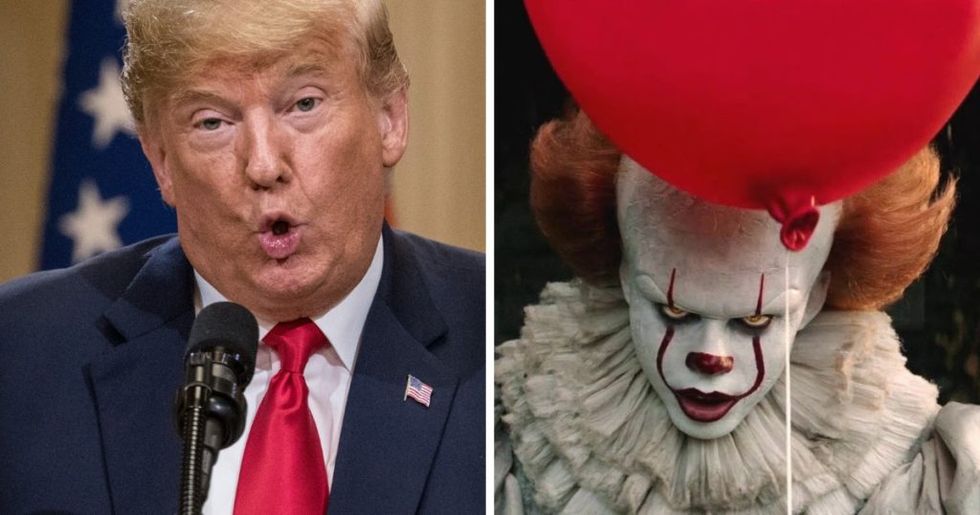 “Democrats want to give welfare and free health care to illegal aliens,” Trump said. “How about this clown in California who’s running for governor? He wants open borders, and then he wants to give them health care, education, everything.”

Newsom replied shortly afterward, taking Trump to task for his "zero tolerance" child separation policy which has exacerbated an already fraught humanitarian crisis on our nation's southern border, before then comparing Trump to perhaps the nastiest clown of all.

“Interesting description coming from the guy who is literally locking up kids like Pennywise,” he wrote, referring to the child-snatching Pennywise the Dancing Clown from Stephen King's bestselling novel It, a character which was first played with great aplomb by Tim Curry in a television miniseries and later by Bill Skarsgård in last year's critically acclaimed feature film adaptation.

Many found the comparison to be quite apt. First, the Trump-as-Pennywise memes commenced...

...with at least one person coming to Pennywise's defense.

Another pointed out that Newsom's nickname for Trump isn't exactly original...

@GavinNewsom @realDonaldTrump I've referred to him President Pennywise since hw was elected. Great to see others who see the similarities.
— FlowerGirlzMN (@FlowerGirlzMN) 1537524326.0

...while another pointed out the absurdity of Trump constantly calling people names.

Trump continued to push for harsher immigration measures during his appearance, taking the opportunity to claim that Democrats have obstructed his plans for a wall along the U.S.-Mexico border.

Trump often came under fire on the campaign trail for referring to Mexicans as “rapists” and “murderers.”

In the days since the body of Mollie Tibbetts, a Brooklyn, Iowa college student was found, Trump and many conservatives have seized on the fact that the suspect, Cristhian Bahena Rivera, is a Mexican national who authorities say was in the country illegally, and have used the murder to make the case for harsher immigration legislation.

In June. the president and his administration created a crisis at the U.S.-Mexico border when he and Jeff Sessions, his attorney general, announced their “zero tolerance” family separations policy.

The president blamed Democrats for the policy, imploring them to “start thinking about the people devastated by Crime coming from illegal immigration.”

The president denied that he or Sessions had anything to do with the policy, even as he admitted that the policy is a negotiating tool to get Democrats to cave to his demands (which include tougher border security as well as a wall erected along the nation’s southern border).

In a court filing last month, the Department of Justice said that the American Civil Liberties Union (ACLU), which represents plaintiffs affected by the president’s “zero tolerance” family separations policy, should “use their considerable resources and their network of law firms, NGOs, volunteers, and others, together with the information that defendants have provided (or will soon provide)” to reunify deported parents with their children. The Trump administration suggested that the ACLU seek out the parents themselves and ask if they wish to reunite with their children or if they wish to waive that option.

An administration official said that the filing “simply asks the court to require the ACLU to determine the wishes of and fulfill their obligations to their clients, as they have repeatedly represented in court that they would.“

The ACLU, while eager to reunite parents with their children, argued in court documents that the government “must bear the ultimate burden of finding the parents.”

“Not only was it the government’s unconstitutional separation practice that led to this crisis, but the United States Government has far more resources than any group of NGOs,” ACLU attorneys wrote.

Neither side can agree about what information is appropriate and necessary for the government to provide.