Mysterious Drones Have Completely Shut Down The U.K.'s Second-Largest Airport, and People Have Questions 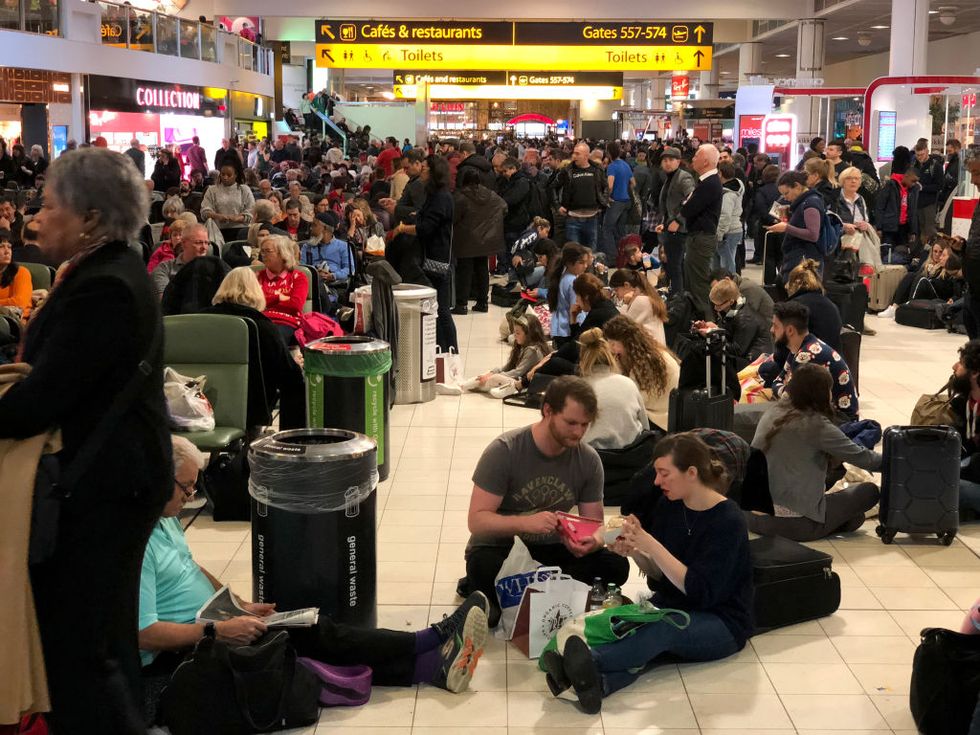 LONDON, ENGLAND - DECEMBER 20 : Passengers stranded at Gatwick waited for updates on their travel options on December 20, 2018 in London, England. Authorities at Gatwick closed the runway after Drones were spotted over the airport on the night of December 19. The shutdown has sparked a succession of delays and diversions in the run up to the Christmas getaway. (Photo by Athanasios Gioumpasis/Getty Images)

At a time when travelers are embarking on journeys home for the holidays, the second largest airport in the United Kingdom—Gatwick Airport—has shut down due to sightings of drones flying overhead.

The drones have resulted in chaos affecting over 110,000 passengers, not to mention the diversion of numerous flights that were scheduled to land at Gatwick before the sightings. Those flights have diverted their landings to London's Heathrow airport while some were forced to land other places in Europe. The airport isn't expected to reopen until Thursday afternoon.

Prime Minister Theresa May assured that the culprits would face prison time:

"We've already passed legislation in relation to the use of drones, so it is now—as has been made clear—the activity we've seen is illegal and those who are caught endangering aircraft can face up to five years in prison."

The British army is reportedly intervening to find the culprits.

BREAKING: Gavin Williamson has just confirmed to me & other reporters: “We will be deploying the armed forces” at… https://t.co/ggn70aauUP
— Lucy Fisher (@Lucy Fisher) 1545321739.0

But many were left wondering what this means for overall preparation if a small drone can bring the airport to a standstill.

We are, supposedly, preparing for a no deal Brexit, and meanwhile, a small, radio controlled toy holds the country… https://t.co/oKbgrhel8r
— Colin Tassell#FBPE (@Colin Tassell#FBPE) 1545328623.0

The English may be known for their composure, but some were understandably about to lose it.

What’s happening at Gatwick is just a foretaste of what would be happening across all ports and airports in the eve… https://t.co/A4z9jl4qUJ
— Andrew Adonis (@Andrew Adonis) 1545322266.0

6 hours and counting sat on the floor of the Departures Lounge at @Gatwick_Airport. Cheers, drone bastards. You mas… https://t.co/ytmZEo3Brb
— Katharine Bubbear (@Katharine Bubbear) 1545307491.0

Cheers to whoever is flying drones over Gatwick, I may not make it back for my Christmas turkey, bastards😤
— Michael (@Michael) 1545309727.0

Despite the inconvenience, there were several jokes made.

Some may have been made too soon.

Though a shuttered airport brimming with people eager to get to their destination may not be the warmest environment, there were some who wouldn't let the delays deter their holiday spirit.

Staff and parents join children for Christmas singalong while they wait to travel as flights to and from London's G… https://t.co/5bTju4mQUu
— ABC News (@ABC News) 1545318816.0

Hopefully the airport will reopen soon and those stranded will be with their loved ones for the holidays.