Republican Congressman Just Tweeted a Warning to Michael Cohen the Day Before His Public Testimony, and People Are Pretty Sure He Just Broke the Law 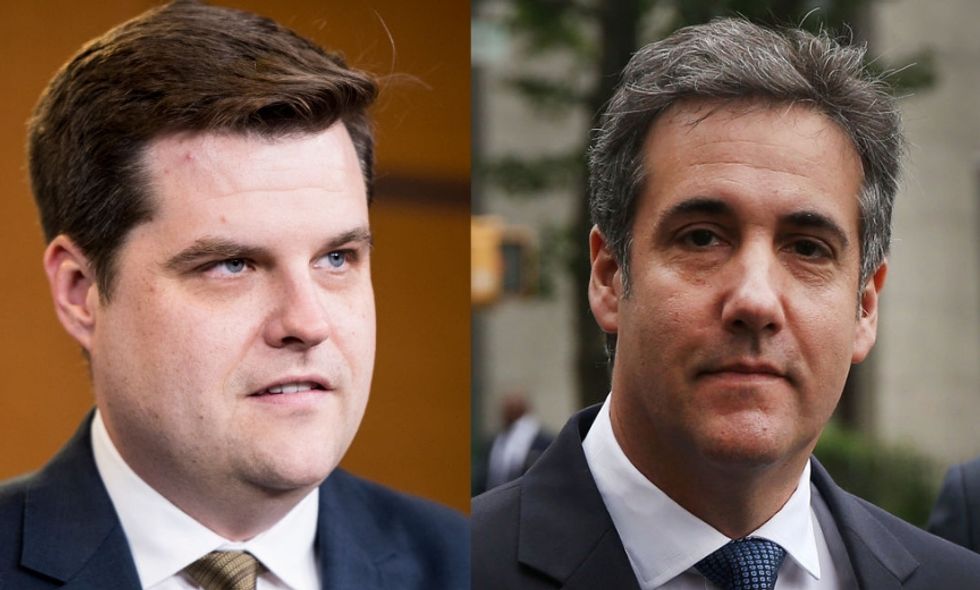 Congressman Matt Gaetz (R-FL) is in hot water after tweeting what many believe to be a threat to President Donald Trump's former attorney Michael Cohen ahead of Cohen's public testimony against Trump before the House Oversight Committee.

Gaetz implied that Cohen's alleged extramarital affairs would be exposed to his wife and father-in-law and that his wife would leave him after he reports to serve his prison sentence in two months. The tweet has since been deleted.

@mattgaetz/TwitterThough it may seem like just another low blow from one of Trump's staunchest allies in Congress, others think Gaetz crossed a whole other line.

Specifically the line stipulated in Title 18 of the US Code, as former head of Government Ethics Office Walter Shaub pointed out.

According to Section 1512 of Chapter 73 of Title 18, anyone who uses intimidation or threats to "influence, delay, or prevent the testimony of any person in an official proceeding" (like a congressional testimony) will be fined and could even serve up to 20 years in federal prison.

Congressman Bill Pascrell, Jr. (D-NJ) reached the same conclusion as Shaub and called for his colleagues to investigate.

Many see Gaetz's tweet as a perfect example of witness tampering.

Gaetz, however insisted that his tweet doesn't amount to witness tampering, but that

“It is challenging the veracity and character of a witness. We do it everyday. We typically do it during people's testimony. This is what it looks like to compete in the marketplace of ideas.”

He continued to assert that the tweet is simply "witness testing."

That's not how the American public saw it.

@maxwelltani @jonathanvswan @samstein Wow. You learn something new every day. It used to be called witness tampering.
— Jimmy (@Jimmy) 1551219480.0

The tweet was seen by many as a new low for Gaetz.

@mattgaetz @MichaelCohen212 Matt Gaetz is truly one of the most depraved people in power today. What a disgrace to… https://t.co/kmnjfhMCdW
— Ahmed Baba (@Ahmed Baba) 1551219768.0

@maxwelltani @samstein Matt Gaetz needs to clear any further comments regarding this Tweet through his attorney. A… https://t.co/HWzF9cWfzA
— Dave Smith (@Dave Smith) 1551220530.0

Gaetz is known to be one of Donald Trump's most dedicated allies in Congress, and some think this tweet sounds suspiciously Trumpian.

Did Trump tell Gaetz to do this? Because a federal conspiracy charge would make Gaetz getting investigated for witn… https://t.co/A44wCogvTb
— Seth Abramson (@Seth Abramson) 1551220291.0

Gaetz insists that Donald Trump had nothing to do with the tweet, and Gaetz has yet to apologize.