Tulsi Gabbard Accuses Trump of Treating the Military Like 'His Prostitutes', Says 'You Are Not Our Pimp' 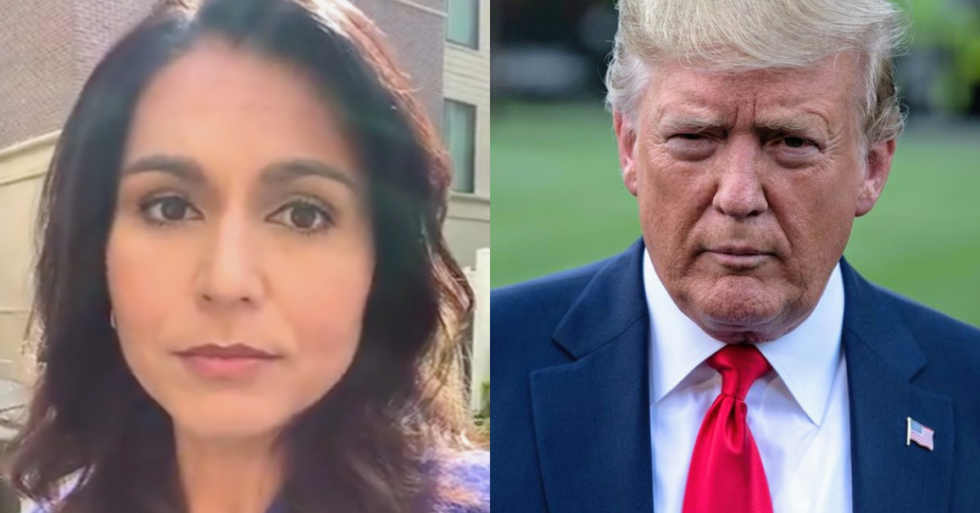 Only training units—deployed to train Saudi personnel on United States military technology—remained in the country at the Saudi government's Eskan Village base. However in July 2019, military news sources reported that in June the military begun deploying hundreds of United States personnel and support equipment back to the Prince Sultan Air Base, now owned and controlled by the Saudi government.

But one member of the military had a strong rebuke for President Trump wielding the US forces as a security force for the Kingdom of Saudi Arabia. Democratic presidential candidate Tulsi Gabbard recorded a video she shared on Twitter referring to Trump—who intimated the US military would be at Saudi beck and call because they paid for the privilege—as a "pimp."

She captioned her video:

"[President Donald Trump] Despicable. Offering to place our military assets under the command of a foreign country—Saudi Arabia—is a disgrace and betrayal of my patriotic brothers and sisters in uniform and to our Constitution. We are not your prostitutes. You are not our pimp."

Gabbard is a member of the Hawaii Army National Guard. Like many in the guard, Gabbard spent 12 months in Iraq as a specialist with the medical company.

Much of her objection centered around selling US military personnel to the highest bidder, calling it a betrayal to pledge the military to the "Islamist Kingdom" of Saudi Arabia and to Prince Mohammad bin Salman specifically. Trump's ties with the Saudi Prince many feel was responsible for the murder and dismemberment of journalist Jamal Khashoggi, a United States resident who worked for The Washington Post.

People concurred with Gabbard's take, even if they didn't phrase it quite the same way.

@SameeraKhan @TulsiGabbard @realDonaldTrump The fact is Sameera, that for the President of the USA to make a statem… https://t.co/W920nXXL7j
— Zbigniew (@Zbigniew) 1568721423.0

Some called out Trump's foreign policy as antagonizing Iran to try to elicit a response so he could start a war in hopes of it helping his reelection chances—something he accused President Barack Obama of more than once.

The book Diplomatic Savagery: Dark Secrets Behind the Jamal Khashoggi Murder detailing the murder of journalist Jamal Khashoggi inside the Saudi embassy in Turkey is available here.