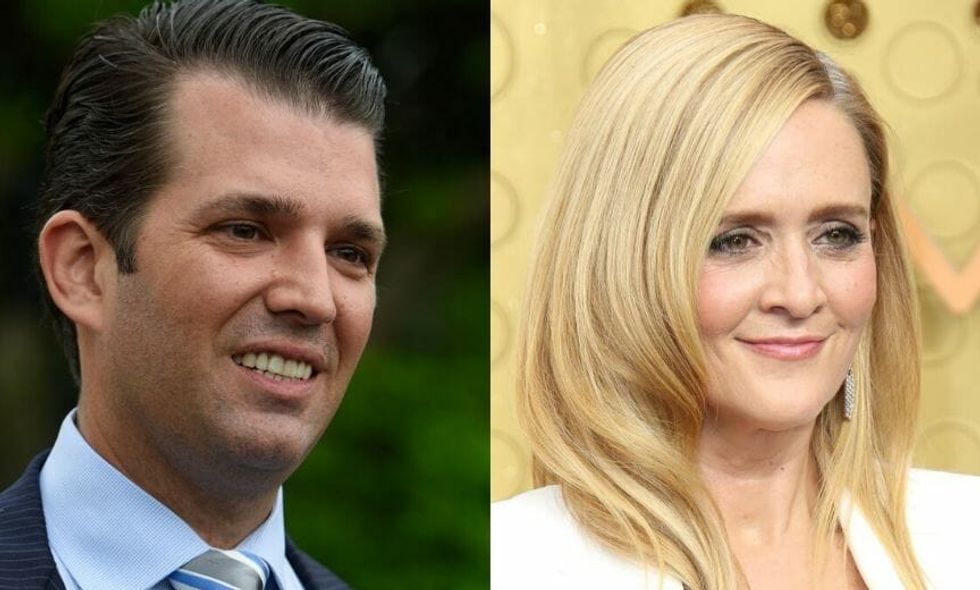 Ahead of the release of his book Triggered: How the Left Thrives on Hate and Wants to Silence Us, the President's eldest son, Donald Trump Jr., attempted to boost sales by having his father's supporters send "leftist commie" lawmakers and private citizens a copy of his book.

The pathetic attempt to sell books by trolling didn't go unnoticed by the folks at Full Frontal with Samantha Bee. The feminist late night comedian soon released a site of her own, TriggerATroll.com, nearly replicating Trump Jr.'s, but with a few key differences.

The main difference is that instead of tricking you into buying a book for someone you hate who also won't read it, Bee's site allows the visitor to send a donation to a cause in the name of a Republican figurehead who opposes it.

Naturally, she took the time to troll Don Jr. as well, with descriptions like:

"We know this website looks like sh*t. That's because it looks exactly like the website Donald Trump Jr. made to promote his book. Seriously. We're not going to link to it, but it's gross. Hire a graphic designer next time."

And of course, there's this picture of a Trump Jr./Samantha Bee hybrid that's equal parts hilarious and frightening.

Bee's bio doesn't disappoint either as it pokes fun at the Trump organization's nepotism, reading in part:

Sam Bee is the only daughter of Canadian real estate mogul, Mr. Samantha Bee, Esq., a man who did absolutely nothing to push her career forward except give her millions upon millions of dollars to f*ck around with. Sam is the host of Full Frontal with Samantha Bee, a show that is viewed by billions around the world, the biggest audience ever to watch a late night show...She would like to reiterate that her success had absolutely nothing to do with her father's extensive Canadian Hollywood TBS connections or his lavish fortune."

People cheered Bee on while continuing to troll Trump's book.

@FullFrontalSamB @DonaldJTrumpJr Must scroll through to the end-that pic is priceless!
— Catherine Boyle (@Catherine Boyle) 1572998495.0

@FullFrontalSamB @DonaldJTrumpJr In surprised he can read or write coming from Trump's genes
— Rob (@Rob) 1573008404.0

@FullFrontalSamB @DonaldJTrumpJr The thing that is hilarious is they really think they are "conservative". trump… https://t.co/HKzDf3rHNG
— David Brunner (@David Brunner) 1573065037.0

Get some laughs at Samantha Bee's site, then give some donations.

The Donald Trump Jr. (parody) book Figgered: My Dad Is Bigger Than Your Dad is available here.