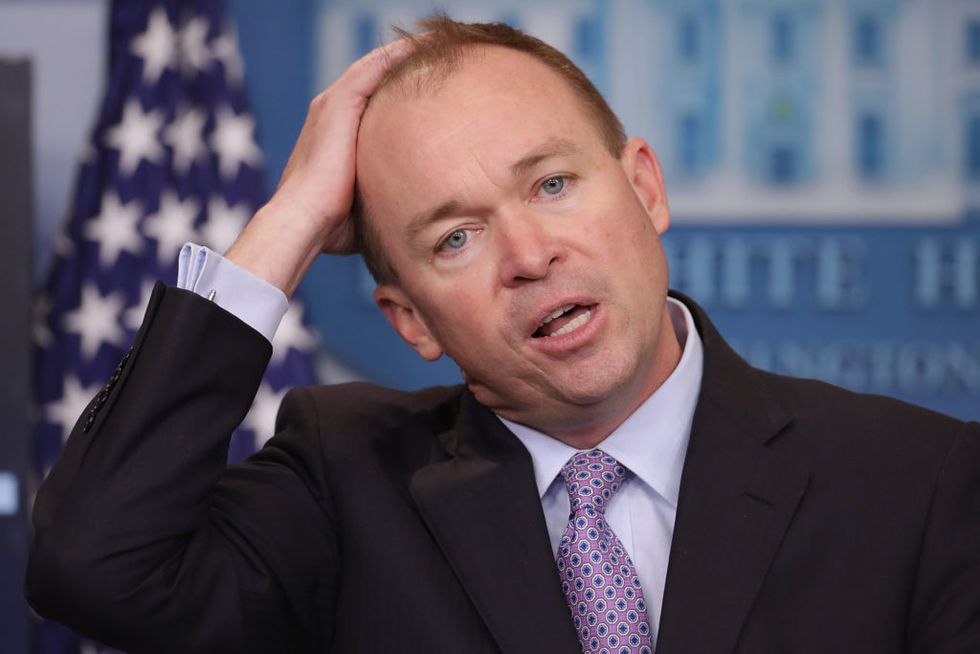 WASHINGTON, DC - MAY 23: Office of Management and Budget Director Mick Mulvaney holds a news conference to discuss the Trump Administration's proposed FY2017 federal budget in the Brady Press Briefing Room at the White House May 23, 2017 in Washington, DC. Calling it a "New Foundation for American Greatness," the $4.1 trillion budget for would cut programs for the poor, including health care, food stamps, student loans and disability payments while offering big tax cuts for the wealthy. (Photo by Chip Somodevilla/Getty Images)

Seth Frotman, student loan ombudsman at the Consumer Financial Protection Bureau (CFPB) submitted a letter of resignation to his boss, Acting Director of the CFPB, Mick Mulvaney. It begins as most resignations would, but quickly veers into an indictment of the motives and mindset of the Trump administration.

"It is with great regret that I tender my resignation as the Consumer Financial Protection Bureau's Student Loan Ombudsman," Frotman begins. "It has been the honor of a lifetime to spend the past seven years working to protect American consumers; first under Holly Petraeus as the Bureau defended America's military families from predatory lenders, for-profit colleges, and other unscrupulous businesses, and most recently leading the Bureau's work on behalf of the 44 million Americans struggling with student loan debt."

"However, after 10 months under your leadership, it has become clear that consumers no longer have a strong, independent Consumer Bureau on their side."

Frotman goes on to explain the universal importance of consumer protections for student loan recipients.

"Each year, tens of millions of student loan borrowers struggle to stay afloat. For many, the CFPB has served as a lifeline—cutting through red tape, demanding systematic reforms when borrowers are harmed, and serving as the primary financial regulator tasked with holding student loan companies accountable when they break the law."

"The challenges of student debt affect borrowers young and old, urban and rural, in professions ranging from to clergymen. Tackling these challenges should know no ideology or political persuasion. I had hoped to continue this critical work in partnership with you and your staff by using our authority under law to stand up for student loan borrowers trapped in a broken system."

Seth Frotman's bio from the Consumer Education and Engagement Division on the CFPB website. (CFPB)

The resigning student loan ombudsman then accuses Mulvaney of a criticism many leveled against the embattled appointee of President Donald Trump: putting financial gains for big money donors and corporations ahead of consumers and taxpayers.

"Unfortunately, under your leadership, the Bureau has abandoned the very consumers it is tasked by Congress with protecting. Instead, you have used the Bureau to serve the wishes of the most powerful financial companies in America."

Mick Mulvaney—the Trump administration appointee heading the Office of Management and Budget (OMB) as well as acting Directing of the CFPB—famously stated about his time as a Republican Congressman for South Carolina:

"We had a hierarchy in my office in Congress. If you're a lobbyist who never gave us money, I didn't talk to you."

Frotman asserts in his resignation that Mulvaney continues that hierarchy now at the CFPB. If you gave money to the Trump campaign or Trump causes or spent money at Trump Organization properties, Mulvaney would talk to you, leaving average United States citizens out in the cold.

The man who once protected consumers from predatory student loans makes three specific allegations against Mulvaney's leadership at the CFPB.

"As the Bureau official charged by Congress with overseeing the student loan market, I have seen how the current actions being taken by Bureau leadership are hurting families. In recent months, the Bureau has made sweeping changes, including:"

Within each allegation, Frotman gave descriptions clearly pointing the finger at Mulvaney's leadership and—by extension—the Trump administration. The resigning ombudsman made that indictment clear in the following conclusion of his resignation.

"American families need an independent Consumer Bureau to look out for them when lenders push products they know cannot be repaid, when banks and debt collectors conspire to abuse the courts and force families out of their homes, and when student loan Companies are allowed to drive millions of Americans to financial ruin with impunity," Frotman stated.

"In my time at the Bureau I have traveled across the country, meeting with consumers in over three dozen states, and with military families from over 100 military units. I have met with dozens of state law enforcement officials and, more importantly, I have heard directly from tens of thousands of individual student loan borrowers."

"A common thread ties these experiences together—the American Dream under siege, told through the heart wrenching stories of individuals caught in a system rigged to favor the most powerful financial interests. For seven years, the Consumer Financial Protection Bureau fought to ensure these families received a fair shake as they as they strived for the American Dream."

"Sadly, the damage you have done to the Bureau betrays these families and sacrifices the financial futures of millions of Americans in communities across the country."

"For these reasons, I resign effective September 1, 2018. Although I will no longer be Student Loan Ombudsman, I remain committed to fighting on behalf of borrowers who are trapped in a broken student loan system."

Frotman served as student loan ombudsman since 2015. Congress created the position in 2010—in response to the financial crisis created by predatory lending—under the Dodd-Frank Wall Street Reform and Consumer Protection Act.

The CFPB handled over 60,000 student loan complaints since 2011. After their investigations and enforcement efforts, they returned more than $750 million to student loan borrowers.

Mick Mulvaney once referred to the CFPB as "a joke ... in a sick, sad kind of way." When President Donald Trump tagged him as acting CFPB director under the 1998 Federal Vacancies Reform Act (FVRA) which bypasses Senate confirmation hearings on fitness for the job, many stated it signaled the end of the CFPB as a consumer protection service for US citizens.

Mulvaney immediately stopped collecting fines, suspended rulemaking, ordered a review of all active investigations and instituted a hiring freeze at the CFPB. Recently, he considered lessening oversight of lenders over violations of the Military Lending Act which prohibits predatory lending to military service members and their families.

Under the FVRA, Mulvaney can serve as acting interim director for 210 days. The President appointed Mulvaney effective November 25, 2017 which set his tenure end at June 22, 2018.

Unlike the SCOTUS confirmation for Brett Kavanaugh which is on a fast-track, almost nothing has been said of Kraninger's confirmation aside from it will likely "take months." Critics accused the Trump administration of using a placeholder nomination to keep Mick Mulvaney in power longer.