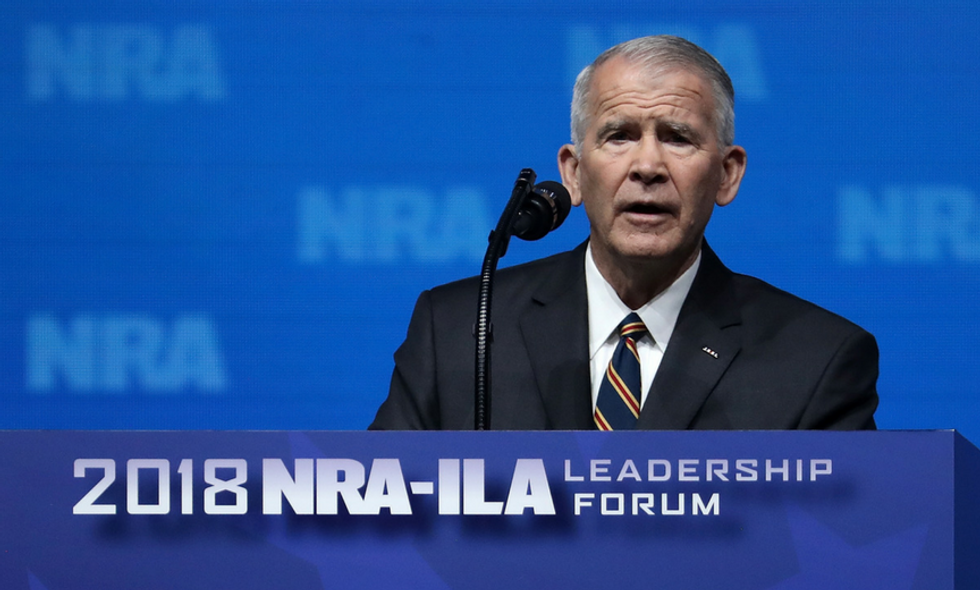 Fred Guttenberg, whose 14-year-old daughter Jaime was murdered at Marjory Stoneman Douglas High School in February, is firing back at NRA President Oliver North after North referred to student activists as "civil terrorists."

Speaking to The Washington Times, North said that the NRA is being treated worse than civil rights groups in "the terrible days of Jim Crow."

They’re not activists—this is civil terrorism. This is the kind of thing that’s never been seen against a civil rights organization in America...you go back to the terrible days of Jim Crow and those kinds of things—even there you didn’t have this kind of thing.

Guttenberg, who has become a vocal proponent of gun control and school safety since the massacre in Parkland, Florida, issued a series of emotional tweets slamming North's bizarre accusations.

“Your ridiculous, hateful, shameful, cruel, stupid, pathetic remark has certainly tested me. So that we are clear, the other Parkland gun crime victims and I are not civil terrorists."

parents civil terrorists. We are fighting for our life and the memory of those we loved. What would have been appro… https://t.co/VXI8oddwOF
— Fred Guttenberg (@Fred Guttenberg) 1525997743.0

Throughout this process I have refused to personally attack anyone. However, your ridiculous, hateful, shameful, cr… https://t.co/gEohJEw48T
— Fred Guttenberg (@Fred Guttenberg) 1525997743.0

group. We will end your reign of terror and we will pass common sense gun safety in this country. Your remarks sou… https://t.co/KntI0PitBD
— Fred Guttenberg (@Fred Guttenberg) 1525997744.0

North also claimed that the NRA has been the victim of a "cyberwar," reported The Guardian.

They can do all the cyberwar against us — they’re doing it. They can use the media against us – they are. They’ve gone after our bank accounts, our finances, our donors and obviously individual members. It’s got to stop.

North, who was chosen to head the nation's largest gun lobby earlier this month, is certainly in an awkward position when it comes to calling other people terrorists. North was a key witness during the 1987 Iran-Contra scandal in which operatives within the United States government, of whom North was a player, sold black market weapons to Iran and then used the proceeds to fund a right-wing rebellion against the socialist government in Nicaragua.

At the time, North was a staffer on the National Security Council and was directly involved in the scheme, which threatened to take down the presidency of Ronald Reagan. He was given immunity from prosecution in exchange for his testimony.

North is a staunchly conservative former Marine lieutenant colonel and has since made a come back as a Fox News commentator.

Twitter erupted in support of Guttenburg, including MSD survivor and activist David Hogg, who has spearheaded the March for our Lives movement against gun violence.

@cocosette7 @ericawvu98 @fred_guttenberg Do not allow the conversation to stop. Have those tough conversations with… https://t.co/Yu1oGOA5ne
— Matt Deitsch (@Matt Deitsch) 1526040855.0