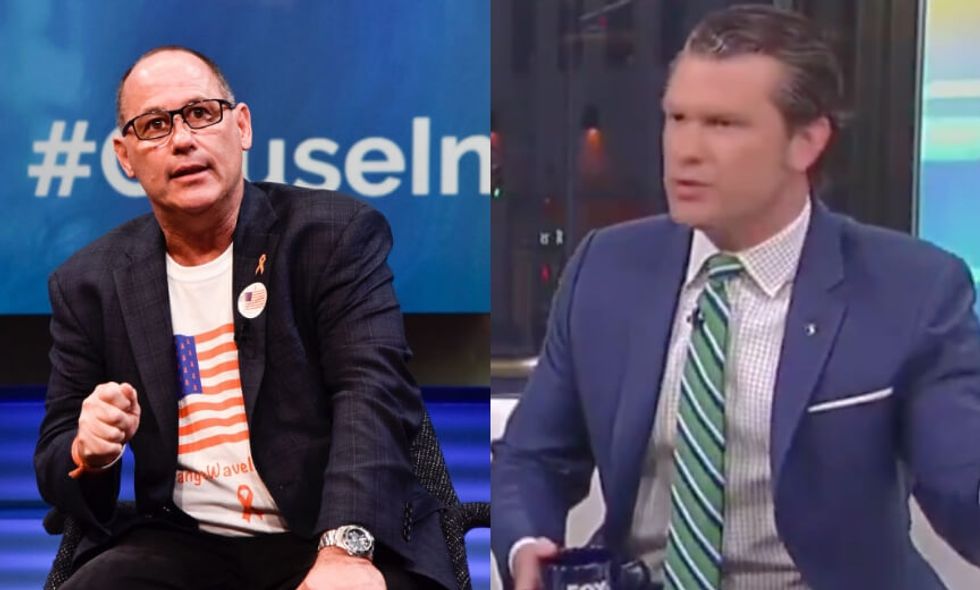 “Such easy, loose rhetoric of the left,” Hegseth said Sunday. “If I own an AR-15, stocks of gun companies probably will go up after things like this. Responsible gun owners recognize their right to own rifles like that. You can use ‘weapons of war’ or ‘assault ban’ all you want.”

“This will appeal to his base: young people who are uninformed about the difference between an automatic and semiautomatic rifle," Hegseth continued. "But go out and get your second AR-15 today. Maybe it’s a good reason to do so.”

Guttenberg fired back on Monday with an emotional plea to gun enthusiasts like Hegseth to consider the danger posed by allowing civilians to own weapons that were previously outlawed in the United States.

"you miserable human being. My daughter was killed in school from a shooter who shot from across the hallway using his AR-15. Shot her in the back, severed her spinal cord, and killed her instantly along with 16 others. How dare you mock this and make a joke of her murder and other victims of AR-15 gun violence. Instead of joking that everyone should go out and buy an AR-15, how about acting responsibly and asking the question on how we can limit the real-life casualties. By the way, this is Jaime. She was killed by an AR-15."

(1,2) @PeteHegseth, you miserable human being. My daughter was killed in school from a shooter who shot from acros… https://t.co/sBb1rwTGao
— Fred Guttenberg (@Fred Guttenberg) 1552934148.0

The grieving father continues to tug on the heartstrings of people who want to end the senseless plague of gun violence in America.

Hegseth was responding to remarks by Democratic presidential candidate Beto O'Rourke, who over the weekend tried to appease both sides of the ongoing gun debate.

“Now if you own an AR-15, keep it. Continue to use it responsibly and safely," O'Rourke said Saturday, shortly after announcing his White House bid. "I just don’t think that we need to sell any more weapons of war into this public."

Some gun control advocates think are siding with Guttenberg entirely. They see no place in our society for weapons designed for one thing - mass, indiscriminate slaughter.

"This is deeply irresponsible of @BetoORourke," tweeted Igor Volsky, executive director at Guns Down. "*Nobody* needs an AR-15: not for hunting, not for sports shooting, not for anything. AR-15s are designed to kill as many people as efficiently as possible and they must be outlawed."

On the other hand, others focused more on O'Rourke's call to end the manufacture and sales of AR-15s, as a matter of practicality.

Hegseth's comments are especially callous given the events of last week. On Friday, a white supremacist terrorist—and self-described admirer of President Donald Trump as a "symbol of renewed white identity and common purpose"—murdered 50 people an injured 31 more at two New Zealand mosques.

In response,  New Zealand Prime Minister Jacinda Ardern ordered an investigation into whether her government could have prevented the attack.

“The purpose of this inquiry is to look at what all relevant agencies knew — or could or should have known — about the individual and his activities, including his access to weapons,” Ardern said at a Monday press conference in Wellington.

Aldern also announced that her country will rewrite its gun laws within 10 days so that future violence can be averted.

"Within 10 days of this horrific act of terrorism, we will have announced reforms that I believe will have made our community safer," she said.

On top of that, the Associated Press reported on Monday that New Zealand's largest gun show has been canceled out of respect for the victims and their families, as well as “elevated security risks.”

It only took one shooting - the first in more than two decades thanks to strict gun control regulations - for New Zealand to act.