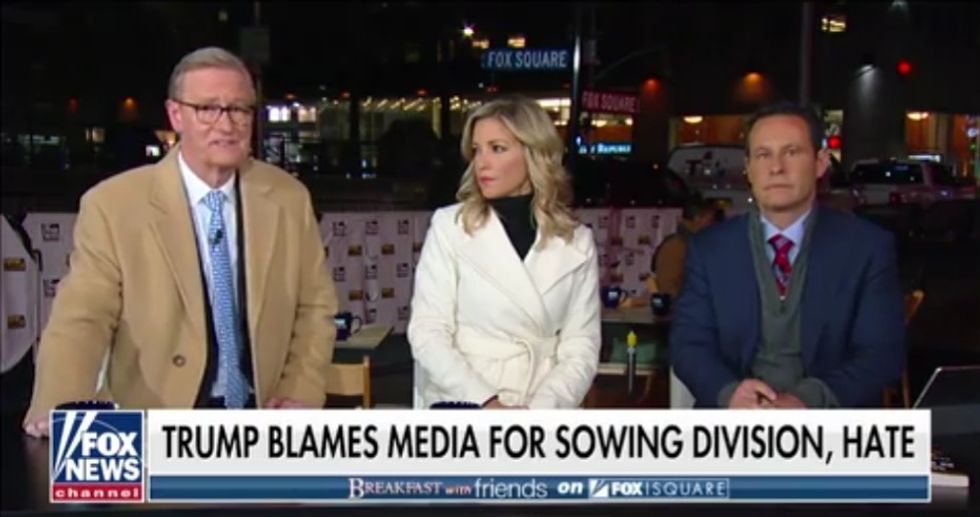 The couch at Fox News' Fox & Friends is usually a safe space for President Donald Trump and members of his administration and family. The Trump administration can rely on the hosts to back whatever is said without any pushback or fact-checking.

But occasionally, even the hosts of Fox & Friends feel they need to take the President to task.

Tuesday morning, reporting from outside instead of their usual studio set, Brian Kilmeade—who together with Ainsley Earhardt and Steve Doocy make up the trio of hosts—finally offered a rebuttal to Trump's anti-press rhetoric.

Fox & Friends showed a clip of an interview with Trump conducted by Laura Ingraham where the President defended his attacks on the media in the wake of one of his supporters sending pipe bombs to his critics, including some in the media.

After the clip, Kilmeade stated:

"I really wish he would lose that term. It doesn’t help anybody, it doesn’t push back on the media that he wants to push back on and I think it gets too many other people aligned, it gets shrapnel with that statement because the press isn’t the enemy of the people."

Co-host Steve Doocy then gave the President an excuse for his anti-First Amendment rhetoric, saying:

"Well I think he probably feels like they are not doing him any favors and so he doesn’t like them ultimately."

But then even Doocy added:

"But, are they the enemy of the people? I don’t think so, either."

After sharing the segment on their own Twitter feed, Fox & Friends got some pushback from their fans. Most parroted the President's own rhetoric.

@foxandfriends We the people voted for President Trump. We expect to turn on our tv’s and get the truth in news. W… https://t.co/R6dLAy9DH3
— Laurie Firestone (@Laurie Firestone) 1540902963.0

However when asked by others to provide examples of so-called fake news...

@NoJohnson5 @foxandfriends Well, in my state Democrats have stuck to the facts and plans they have if they are elec… https://t.co/Qpq4DLYGkY
— Kiara (@Kiara) 1540915961.0

@foxandfriends @musiclsunshine @RealMichaelGuy both of u were asked for an example of fake news by CNN and others. We’re waiting....
— memory_lane (@memory_lane) 1540917420.0

And one person decided to remind people of what the First Amendment states and what the oath of office says.

@foxandfriends "I do solemnly swear (or affirm) that I will faithfully execute the Office of President of the Unite… https://t.co/pX6dZUARTl
— James Peckham (@James Peckham) 1540901997.0

While a private citizen, Trump's lying and exaggeration helped form his brand. Those lies included leaking stories to the media and calling all stories that showed him in a bad light lies.

As President, Trump continues to act as he did in private business. But Freedom of the Press is not exclusive to only press that flatters the President and the truth and facts that upset Trump are not "fake news."

As evidenced by the MAGAbamober targeting several contributors at CNN with his pipe bombs, Trump's attacks on anyone who criticizes him bears consequences. Now even Fox News sees it. Maybe someday the Trump administration will as well.