Well when you put it that way... 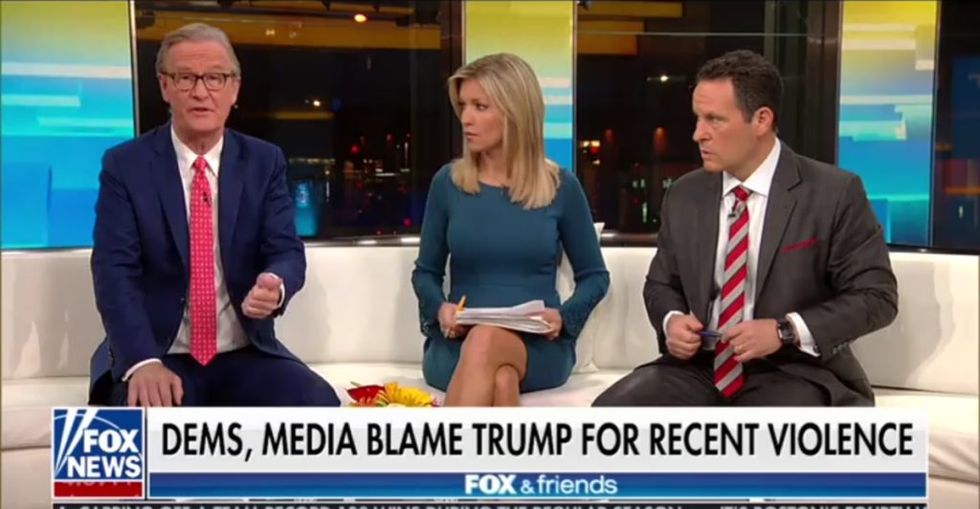 In the wake of repeated hate crimes and domestic terrorism in the United States, President Donald Trump faced strong criticism from the public for his rally rhetoric and Twitter feed. Some go back as far as the President's refusal to condemn neo-Nazis and White supremacists in Charlottesville, Virginia early in his presidency as tacit approval for some of the hate crimes.

But the hosts of the President's favorite program—which he often tweets quotes or ideas from—Fox News Fox & Friends morning show, defended Trump Monday morning. The move surprised no one as the show faces frequent accusations of being a propaganda machine of the Trump administration.

Members of the President's staff and family turn to the couch at Fox & Friends when there is a story that needs a media spin. The President himself calls into the show and the hosts speak to the camera while addressing Trump personally to give advice.

On Monday, the Fox & Friends hosts stated the President's rhetoric targeting George Soros and use of known White supremacist talking points, as well as his association with antisemitic people and groups and failure to disavow such relationships, did not make Trump culpable for any of the recent violence or hate crimes.

Speaking of the mass shooting at a synagogue in Pittsburgh where 11 people were murdered and 6 more injured, the hosts chastised the media and the public for citing the President's past calls for violence and use of known White supremacist language like "globalist" and "nationalist."

"I was just stunned to see how quick everyone was blaming the president and his tone for what happened. It’s just crazy to make that leap and get politics into this."

"This guy was not a Trump supporter, first of all."

"This guy, the shooter, hated Trump because he thought the president was a globalist, he did not vote for him, he never owned a MAGA hat. And yet you saw that kinda reaction all day yesterday." The hosts stayed away from bringing up the man now dubbed the MAGAbomber.

The shooter who murdered 11 people at the Tree of Life Synagogue in Pittsburgh may not own a MAGA hat, but he employed some of the same rhetoric the President uses in his rallies and on Twitter.

Trump may not have stated a global Jewish conspiracy existed, but he and the GOP did promote conspiracy theories about George Soros bankrolling demonstrations against the President and GOP policies.

The shooter in Pittsburgh made many of the same claims.

"...the alleged shooter hated Trump, thought he was a ‘globalist,’ didn’t vote for him, never owned a MAGA hat. You could look it up."

However The Daily Beast columnist Jay Michaelson responded Trump is “almost certainly not” an anti-Semite, however:

"...he is either unwilling or unable to see how his vicious rhetoric against immigrants and Muslims supports a right-wing movement that also hates Jews. He is unwilling or unable to see how his furious midnight tweets and shouted insults at rallies encourage tens of millions of Americans to be enraged at the media, Hollywood, and ‘elites’—all of which, in anti-Semitic imagination, are disproportionately Jewish."

Trump himself claimed he bore no responsibility for his past statements and chose to target the media again on Twitter.

The Fake News is doing everything in their power to blame Republicans, Conservatives and me for the division and ha… https://t.co/W5MyTAJgxq
— Donald J. Trump (@Donald J. Trump) 1540771977.0

However the majority of responses disagreed with the POTUS.

In addition to the 11 people murdered in Pittsburgh and the pipe bombs sent to critics of Trump, two African Americans were executed at a Kroger grocery store in Kentucky where a gunman targeted them because of their race.