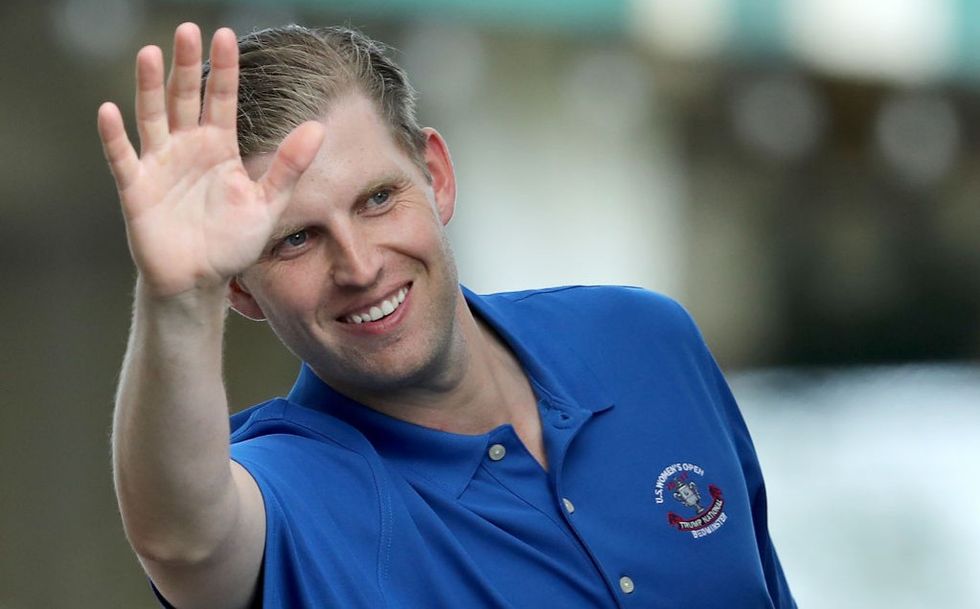 President Donald Trump's second son with first wife Ivana Trump—Eric Trump—made a few stops around the Fox News franchise recently. In each one, the Trump Organization VP touted accomplishments for his father, defended him against critics and attacked his detractors.

Unlike his elder sister Ivanka, Eric Trump serves no official role in the Trump presidential administration. And unlike his elder brother Donald Jr., he remains not yet implicated in the investigation into Russian interference in the 2016 election.

Eric Trump is currently the best choice as an uninvolved spokesperson for his father. But in one Fox media appearance, the younger Trump got his facts checked live by the program host.

While speaking Thursday on The Fox News Rundown podcast, the First Son challenged host Dave Anthony to "name a quantifiable measure right now that we have in our society that’s not better off than it was 20 months ago."

But the younger Trump fell victim to the same issue that plagues his father and older brother. The overuse of superlatives in the Trump males' speech patterns trip them up time and time again when checked against actual facts.

Everything favorable to them rates a description of biggest, most, best ever while anything relating to a rival is the smallest, least and worst. On the podcast, Eric Trump claimed:

"We’ve got the fastest-growing economy in the history of our country."

"However, when you say it’s the fastest-growing economy we’ve ever had, that isn’t really the case, because economic growth of the low-4 percents is what we just have had in the last quarter and there’s hope that that would continue."

"But you have to be fair, even during the Obama administration, while he did have some very low growth in quarters, there were times that he got over 5 percent in economic growth and over 4 percent more than once."

@HuffPostPol Could it be @FoxNews is exhibiting a consciousness of integrity?
— Ken McCafferty (@Ken McCafferty) 1536943310.0

Rather than admit to the over-exaggeration, Trump stated he doubted Anthony’s facts but would "go back and check...very carefully." The Fox News Rundown later provided data for their listeners from the Bureau of Economic Analysis.

You can listen to the full podcast here.

Anthony's facts proved correct while a Trump family member's exaggerated claims were once again false. Eric Trump has yet to make a statement regarding his own findings.

@HuffPostPol The fact that Trump's adult children are his surrogates is so telling... The epitome of dictators ever… https://t.co/BnvIKYc0eD
— A Leonard (@A Leonard) 1536942871.0

But why is lying so prevalent for the Trump's?

While business analysts assess Donald Trump as a fairly poor businessman based on his many failures, one thing the elder Trump excels at is selling himself as a success. Selling his own brand is the single most profitable venture of Trump's career.

Trump himself pointed to his name recognition as the largest factor in his wealth. One need not be a successful businessman if you can convince people you are one—and then get them to buy your products because they associate your name with success.

But convincing people you are the best—when you are not—requires lying. Throughout his business career, Trump lied a lot. His sons continue along that path running the Trump Organization while their father runs the country.

However unlike the wheeling and dealing, fake it until you make it business world that Trump stepped out of, people expect some level of truth to come from the President. The occasional misstatement in Washington made big news in prior administrations and led to big scandals and sometimes multi-year investigations.

In addition to getting called out for his false economic claims during the podcast, Eric Trump also took the opportunity to attack best-selling author and investigative journalist Bob Woodward. Woodward—who helped win a Pulitzer for The Washington Post in 1973 for his work with Carl Bernstein on the Nixon Watergate scandal—just released his 18th book on Washington politics.

Trump drew heavy criticism for the choice of wording. But during his Thursday podcast interview, Trump chose to use "shekels" in reference to Woodward again. People online expressed outrage and even posted comments directly to members of the Trump family.

Feel like we've moved past Eric Trump going on TV and claiming Woodward only wrote the book for "shekels" a little too quickly
— Seanfucious (@Seanfucious) 1536947640.0

Eric Trump failed to respond to the backlash over his use of "shekels" on Fox & Friends and again on The Fox News Rundown. But Bob Woodward expressed his disappointment that Trump would still equate greed with Judaism in this day and age.