He brought the house down. 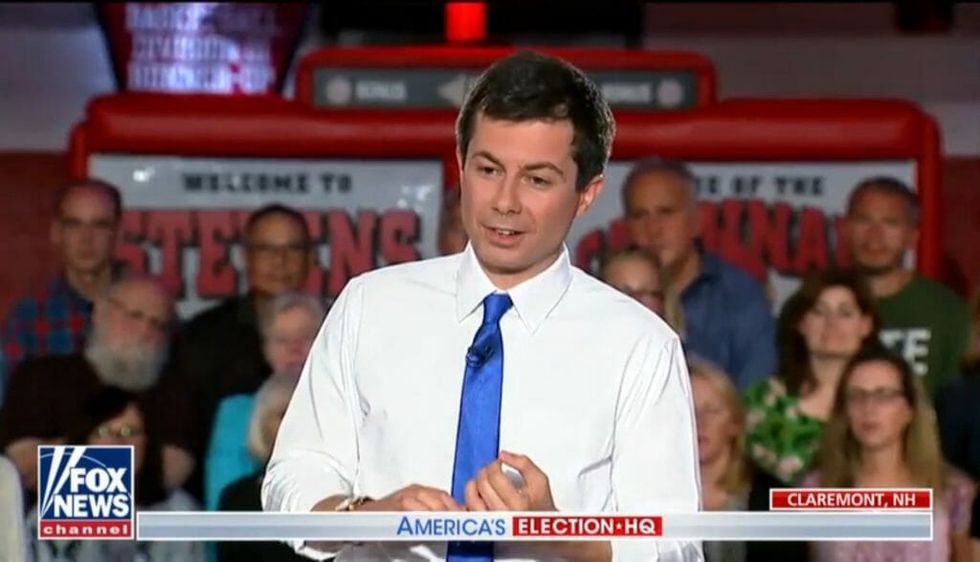 After Wallace asked Buttigieg to comment on the public appeal of the President's Twitter posts, the Indiana mayor replied:

"It is the nature of grotesque things that you can't look away."

When pressed earlier for his personal opinion, especially regarding Trump's attacks against him, Buttigieg said:

"It's a great way to command attention."

"It's a great way to command attention from the media."

Buttigieg went on to state the United States needs to change:

"...the channel from this show [Trump] created."

In wrapping up his appearance on Fox News, Buttigieg stated:

"Look, what we’re trying to do here is different. Because the moment that we’re in is different. I get that a millennial, midwestern mayor is not what leaps to mind when you think about a prototypical candidate for president. But I also think we’re livingi—f it’s hard to figure out what’s going on right now, it’s because we are living on one of those blank pages in between chapters of American history. And what comes next could be ugly or it could be amazing."

"And I believe running for office is an act of hope, and so is voting for somebody, and supporting somebody and volunteering for somebody. I hope you’ll join me in making sure that that next era is better than any we’ve had so far."

#ButtigiegTownhall later trended on social media with the majority of comments favorable toward the Democratic candidate.

Pete Buttigieg proves it's possible to have different opinions and still be civil with those who disagree with them… https://t.co/qS5wVZEVMw
— Trevor Donovan (@Trevor Donovan) 1558308899.0

MAYOR PETE JUST DID THAT! He just reminded everyone why he's a top Presidential contender. He was excellent on… https://t.co/SQvEfviDEK
— CaramelSun (@CaramelSun) 1558311423.0

Mayor Pete is so good @brithume not only praises him, he slams the Dear Leader in the process. #ButtigiegTownHall https://t.co/OcfQS4LJrq
— Political Glutton (@Political Glutton) 1558311841.0

Mayor Pete Buttigieg on the #FoxNews Town Hall is intelligent, measured, likeable and credible! This is what a grea… https://t.co/eNvGEhKg2k
— CaramelSun (@CaramelSun) 1558308282.0

The South Bend mayor is one of several Democrats to accept invitations to appear on Fox News. However others refused the offer.

I understand the arguments of not giving Fox News the time of day, but watching Pete Buttigieg I keep thinking of t… https://t.co/XLbkSJK6sD
— Adam (@Adam) 1558309162.0

In defense of his own position, Buttigieg said:

"If we ignore the viewers of Fox News and every news platform that doesn’t share our worldview, we will surrender our ability to speak directly to millions of American voters. If we don’t show up, the conservative media will tell our side of the story for us."