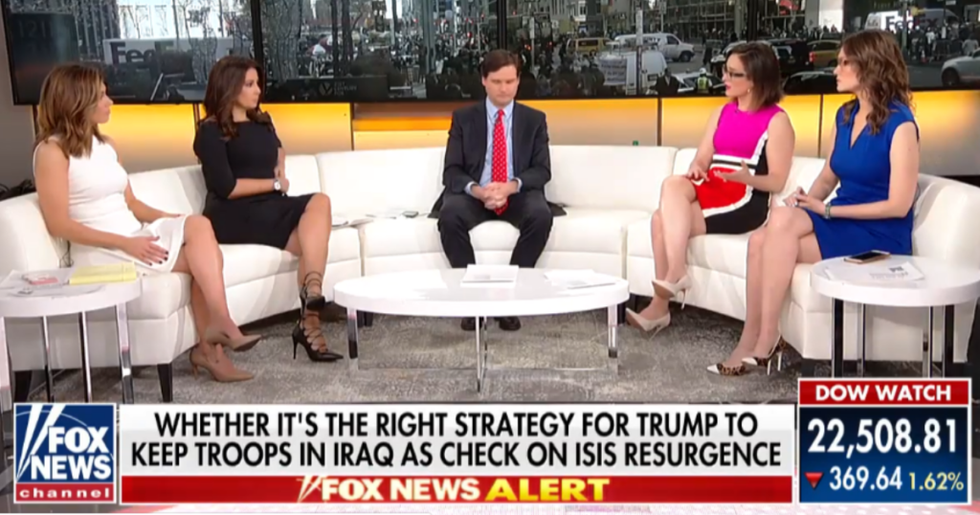 President Donald Trump's Wednesday visit to American troops in Iraq is drawing some surprising criticism from the president's friends over at Fox News.

On Thursday, hosts of Outnumberedtore into Trump for declaring unsubstantiated victory over ISIS and for turning a trip to see the troops into a campaign stop. The president handed out signed MAKE AMERICA GREAT AGAIN hats to servicemembers, which may possibly be a violation of the Hatch Act.

Co-host Lisa Boothe questioned why Trump would pull out of the Iran nuclear deal while at the same time "ceding Syria" to Iran and Russia and expressed skepticism over Trump's approach to ISIS.

“I just don’t think it’s ever worked out for a president to prematurely declare victory over a terrorist organization,” Boothe said. Trump's premature victory speech strategy “didn’t work out for George W. Bush with the ‘Mission Accomplished’ speech,” Booth added, nor did it “work out for President Obama saying that Al Qaeda was ‘on the run.’”

Julie Banderas jumped in with concerns over "the fact that Russia and Turkey, first of all, are supporting the United States and praising us for making a decision." That is "a huge problem,” Banderas said. Additionally, she “really had an issue” with Trump telling the troops that Americans "are no longer suckers."

Banderas "would never consider us, as a country, as the United States, ‘suckers,’” she said. “We have always led the fight in every major war. Military men and women, I believe, deserve way more respect than that.” Banderas wondered if parents of soldiers would think: “Oh, so my son or daughter was a ‘sucker’ when they were fighting for our freedom?”

Lisa Kennedy, on the other hand, defended Trump's comments because the troops “put themselves in harm’s way for incursions and wars that don’t make sense.”

Fox contributor Jessica Tarlov said it would have been better "if the president had gone and made this trip, which he absolutely should have done, and not used it as a campaign rally.”

Twitter weighed in with its thoughts, which included ire over Trump's lie about giving servicemembers a 10 percent pay raise.

@thedailybeast @williamlegate Imagine your boss shows up during the holidays to lie about the raise they gave you🙄
— Mpot (@Mpot) 1545941838.0

Many feel Trump's stunt was insulting to members of the Armed Forces.

@thedailybeast @williamlegate Trump is a salesman without morals, and is always selling himself. He doesn't care if… https://t.co/bOd32vbDak
— Virginia Dreaming (@Virginia Dreaming) 1545938665.0

Most, though, were pleasantly surprised that Fox - Trump's favorite channel - may finally be turning on him.

@thedailybeast I'd be surprised but happy if FOX came out of their self-induced coma and reported the real happenin… https://t.co/PipJllqPTi
— Mary A (@Mary A) 1545940321.0

@thedailybeast Wow😲way to go Fox, for stepping up to the plate and calling out The Donald👨for the phoney showman that he is!
— Valleymom (@Valleymom) 1545944117.0

@thedailybeast @FoxNews Wow, well done. It would be better for America and the WORLD if you saw things more clearl… https://t.co/RejvXNdsWV
— David Harrison (@David Harrison) 1545940995.0

@thedailybeast Wait until later next year Trump will be all alone and even Fox News will abandon him with all his crimes
— Darren Algier (@Darren Algier) 1545938038.0

@thedailybeast When they finally decide they’ve gotten all they can out of Trump it will look a lot like this. If i… https://t.co/LNQnPeV33r
— Robert Burnier (@Robert Burnier) 1545938281.0