When Fox News Tweeted Donald Trump's UN General Assembly Speech, They Conveniently Edited Out The Part When He Got Laughed At 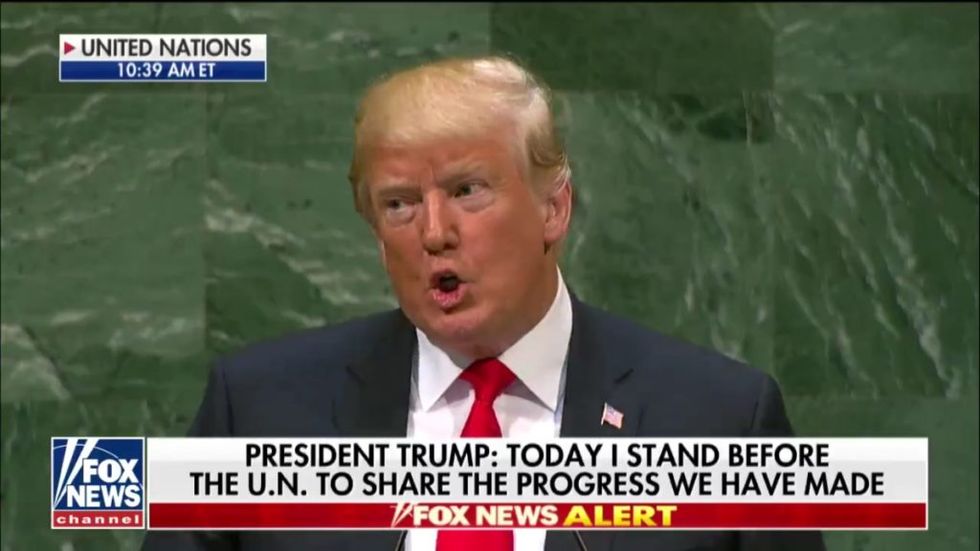 The symbiotic relationship between President Donald Trump and Fox News is well known, so it came as little surprise that Fox would make some convenient edits to the video of Trump's embarrassing moment in front of the UN General Assembly earlier today.

In case you missed it, Trump stated with a straight face:

While that claim would draw thunderous applause from the President's usual audience at one of his rallies, at the United Nations it drew laughter.

Trump followed the claim with his usual agreement with himself and stated:

And the gathered assembly laughed again, to which Trump responded:

You can watch NBC News's video of the moment below:

But for Fox, when it came time to tweet the video of the global embarrassment, the network decided to share two clips, one covering just before the laughter—cutting abruptly as the President finishes the word "country"—and picked up again just after the laughter ended.

Here is the first video.

.@POTUS: “In less than two years, my administration has accomplished more than almost any administration in the his… https://t.co/rOnaFpN5vD
— Fox News (@Fox News) 1537886678.0

The second video picks up just after Trump reacted to his audience's laughter over his claim. Here it is.

The laughter and the President's reaction conveniently did not appear in Fox News coverage. However people happily filled in the blanks for the network.

While the dubious claims and the laughter of world leaders in response led the news on other networks, Fox News tried to pretend it never happened. And pundits called it propaganda.

On Twitter, people let Fox News know what they thought of their altered video and minced few words.

Many shared the unedited versions so Fox News Twitter followers could compare them side by side.

While others added the news of what happened immediately after Fox News' version cut off.

@FoxNews @POTUS I'm from the Netherlands. Let me give you my reaction on behalf of our government. HAHAHAAHHAHAHA… https://t.co/OdLISbMzPb
— Willem Oosterhof (@Willem Oosterhof) 1537896475.0

@FoxNews @POTUS conveniently cut it before you could hear the crowd laugh at him loudly, and he address that reaction.
— The Dude Abides (@The Dude Abides) 1537887717.0

While others took the network to task for their creative editing.