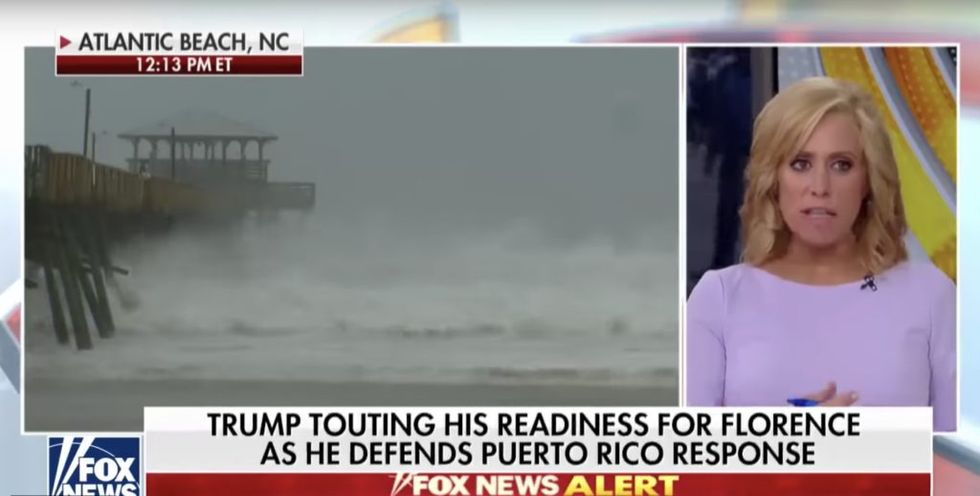 Melissa Francis, the co-host of "Outnumbered" on Fox News, criticized President Donald Trump's comments disputing the death toll in Puerto Rico as a result of Hurricane Maria, saying his remarks are particularly "distasteful" coming, as they did, as Hurricane Florence batters the North Carolina coastline.

“Five states have declared a state of emergency ... Ten million people in the path of Florence,” said Francis. “Instead, they’re fighting back and forth about what happened in Puerto Rico. It is incredibly distasteful. I don’t know why the president weighed in on this one.”

"I understand the president's frustration in the sense that he has worked very hard to help Puerto Rico ... that the effort to help them has been herculean," Francis continued. "But to take up on the issue of how many people are dead is so disgusting."

Contributor Steve Hilton agreed with Francis, calling the president's comments "unseemly," and saying that “this political argument is really unnecessary.”

“What are we doing?” Hilton asked.

Katie Pavlich, a frequent contributor, said the president's comments about Puerto Rico as Hurricane Florence threatens the Eastern Seaboard served as a “distraction from the preparedness for this current hurricane," noting that while questions about how death tolls are determined and much responsibility must fall on local or federal governments are valid, they can be reserved for another time.

Contributor Leslie Marshall also weighed in, saying that Trump should have not politicized the matter at all.

“You can never ― left or right, no matter what office you’re in ― try and turn disaster into political victory,” said Marshall. “One of the things people are looking at ― which they don’t want to see in the president ― is the self-accolades.”

The Fox News panel's discussions comes after Trump, without providing evidence, denied that 3,000 people died in the aftermath of Hurricane Maria in Puerto Rico.

This follows Trump’s claims earlier this week that Puerto Rico was “one of the best” and was an “unsung” success for the administration:

Reporter: What lesson do we take from what happened in Puerto Rico? President Trump: I think that Puerto Rico was… https://t.co/GDYdCtf4Ec
— CBS News (@CBS News) 1536695222.0

A George Washington University study published last month revised the island’s official death toll to 2,975 people, many of whom died due to lack of aid, electricity, water, and access to medical care. The Trump administration shuffled its feet in response to the disaster and was savaged for offering aid remarkably quickly to the victims of Hurricanes Harvey and Irma by comparison.

No two hurricanes are alike, and Harvey and Maria were vastly different storms that struck areas with vastly different financial, geographic and political situations. But a comparison of government statistics relating to the two recovery efforts strongly supports the views of disaster-recovery experts that FEMA and the Trump administration exerted a faster, and initially greater, effort in Texas, even though the damage in Puerto Rico exceeded that in Houston.

The Trump administration was plagued by scandals related to its response to the storm, however, as Second Nexus pointed out earlier this week:

The awarding of the multimillion dollar electrical restoration contract to a company with no disaster experience that belonged to a friend of a cabinet member brought allegations of corruption and cronyism. The official death toll remains unresolved. And getting into Twitter feuds with both the Governor of Puerto Rico and the mayor of San Juan hurt the Trump administration’s public image.

San Juan Mayor Carmen Yulin Cruz, whom Trump called “incompetent,” has made numerous headlines this week for her harsh rebukes of the president, including in tweets she issued this morning, one of which calls the president’s “LACK OF RESPECT APPALLING!”

This is what denial following neglect looks like: Mr Pres in the real world people died on your watch. YOUR LACK OF… https://t.co/4TBOEEBXnl
— Carmen Yulín Cruz (@Carmen Yulín Cruz) 1536843683.0

Yesterday, Representative Gerald Connolly of Virginia said that if Democrats win back the House in this year’s midterms, they will investigate the “failures of FEMA and the response of the administration” after Hurricane Maria in Puerto Rico.