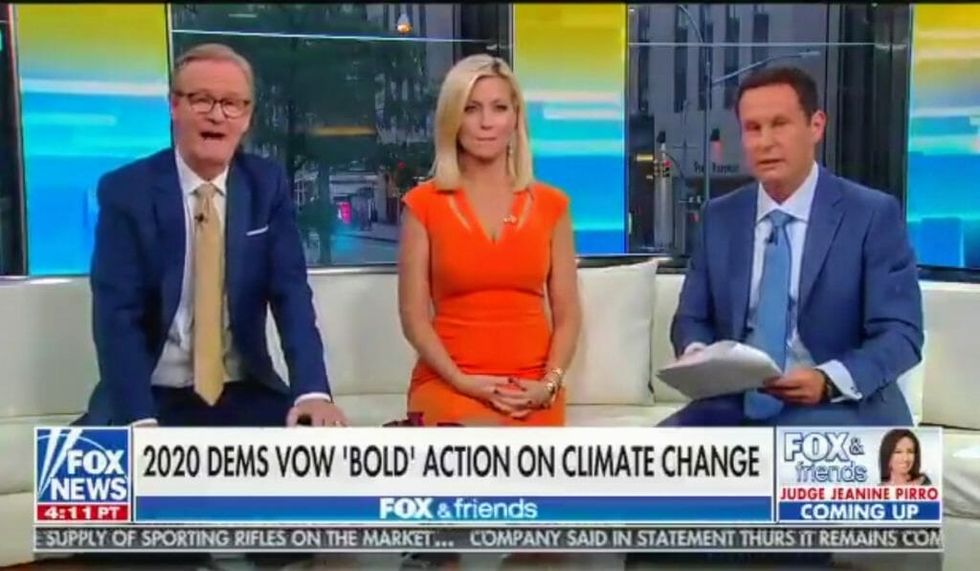 And whatever Trump dislikes, the Fox hosts mock or otherwise attempt to discredit.

Friday morning's target was the Fridays For Future (#FridaysForFuture founded by Swedish teen environmental activist Greta Thunberg) Climate Strike. Millions of people around the world decided to join Thunberg's weekly act of climate activism with events and rallies on September 20 and 27, 2019.

Brian Kilmeade began the disdain with comments about the futility of the gesture. From there the hosts moved on to criticizing Democratic presidential candidates for understanding science and caring about climate change and global warming.

Earhardt added an attempt at humor by mentioning cheeseburgers. But as soon as the segment ended it was time for a news brief.

While Doocy, Earhardt and Kilmeade may have missed the irony, Media Matters for America—a rightwing watchdog group—picked it up, as did their followers online.

@mmfa The self own would be hilarious is our civilization wasn’t at risk
— Chris Anderson (@Chris Anderson) 1568987215.0

Although a few were in Fox's camp.

@Camburnclimate Well you could also point out the unprecedented daisy chain of tropical depressions that are headed… https://t.co/rTkZLdGtQ5
— David Warren (@David Warren) 1568984581.0

While one person pointed out the shortsightedness of ignoring "kids."

Greta Thunberg began her Fridays for Future strikes in August 2018 to go to Sweden's capital and campaign for climate awareness and action. Since then many people around the world have joined her.