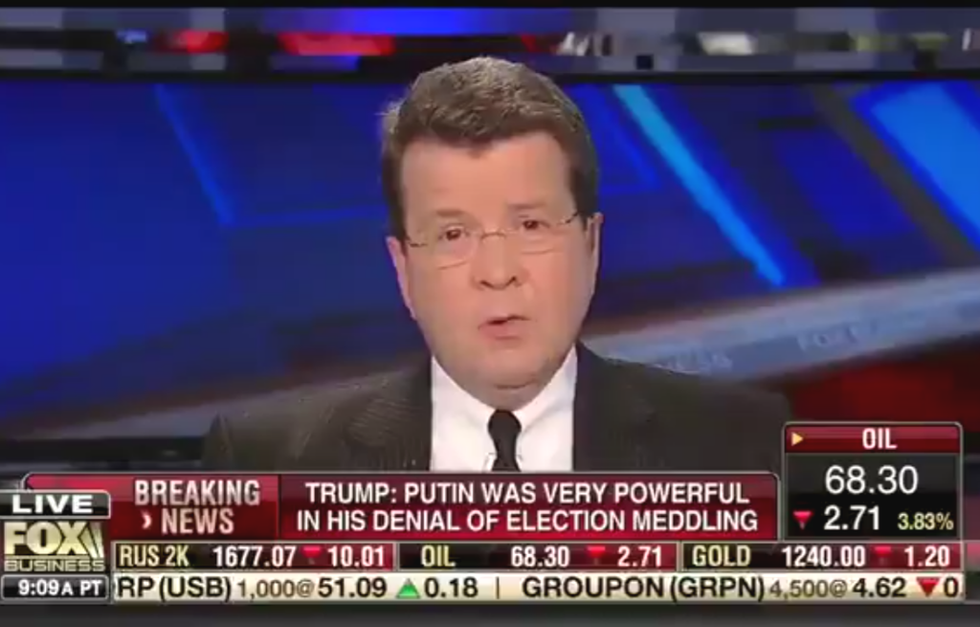 Reactions to the joint press conference Monday between Russian President Vladimir Putin and United States President Donald Trump are very favorable —in Russia. The majority of the rest of the world sees things a bit differently.

Nowhere is the reaction stronger than in the United States and things are not looking good for the 45th President on the homefront. Political foes and one-time friends alike are publicly criticizing the U.S. Commander in Chief.

And Fox Broadcasting, a long-time fan and proponent of the President, rebuked Trump as well.

On Fox Business channel, anchor and commentator Neil Cavuto characterized the President's remarks during his news conference with President Putin as "disgusting." Cavuto was acting as host on his program Cavuto Coast to Coast.

Cavuto's guest, Former Deputy Assistant Attorney General Tom Dupree, appeared on the program to discuss Trump's meeting with Putin and the joint press conference. Dupree stated he was disappointed President Trump missed an opportunity to be more aggressive and tell Putin he would be punished for his state sponsored election interference and to "never think about doing that again."

"A U.S. President on foreign soil talking to our biggest enemy —or adversary or competitor or I don't know how we define them these days— is essentially letting the guy get away with this and not even, ya know, offering a mild criticism."

That set us back a lot."

In the full interview, posted by Cavuto on his Twitter feed, the theme remains the same.

According to Dupree and Cavuto, the President should have confronted Putin on his government's interference into the 2016 presidential elections and, Trump's failure to do so reflects very poorly on the President's claims of no cooperation or collusion between his campaign and the Russian government.

And people online are agreeing with that assessment.

People are being critical of the relationship Trump has cultivated with Putin.

@TeamCavuto The people still making excuses for the orange buffoon need to give their head a shake.
— Some Dude (@Some Dude) 1531762809.0

And neither the GOP nor Fox Broadcasting is coming away unscathed by public rebuke.

@TeamCavuto Only the @GOP can do it. We need Trump impeached. Today. Take our chances with Pence. #CountryOverParty
— Screen Time Comic (@Screen Time Comic) 1531761972.0

@axios Gee, you think that maybe Fox and Sinclair have been backing a feckless coward all this time? After all… https://t.co/7GI3vE5Lwl
— LiarinChief (@LiarinChief) 1531758677.0