Fox Business Ran a Questionable Segment Promoting Bulletproof Backpacks for Kids, and People Don't Even Know Where to Start 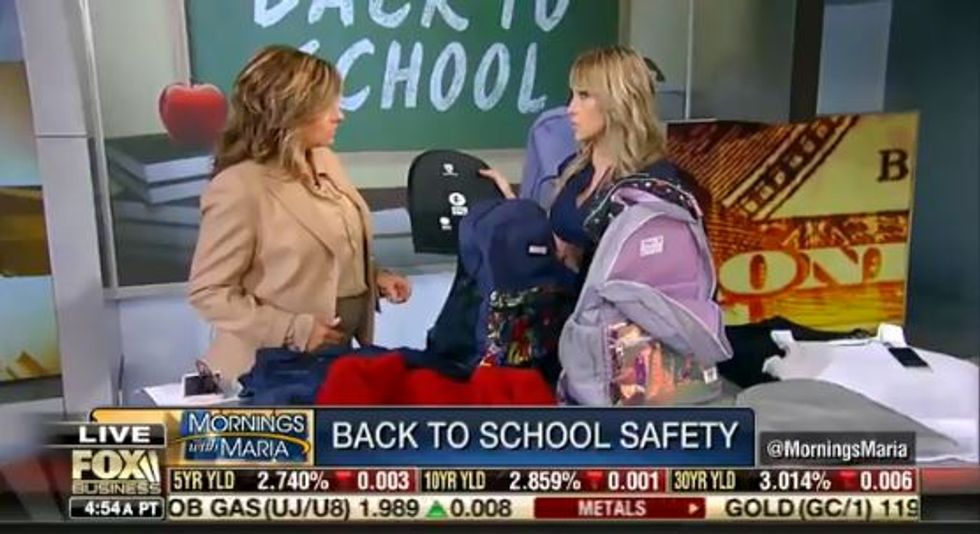 School shootings have become all too frequent in the United States. While tragedies like that of Marjorie Stoneman Douglas High School earlier this year still haven't compelled lawmakers to pass meaningful gun legislation, businesses aren't hesitating to profit off the fears of parents by marketing bulletproof accessories.

On Monday, Fox Business Network promoted a line of bulletproof backpacks and sweaters from MC Armor during a back to school segment. After introducing the segment with the song "Bulletproof" by La Roux, host Maria Bartiromo and MC Armor spokesperson Carolina Ballesteros Casas began to tout the products.

While products like bulletproof blankets have been growing in popularity, these items becoming a necessity is troubling for many Americans. Bartiromo briefly touched on this before diverting the subject back to the "fashion forward" backpacks:

Oh, my goodness. It's incredible that this has come to this, though, that we need bulletproof clothing. Some of these things are quite fashion forward.

Many on social media found the segment unsettling.

@mmfa Bulletproof backpacks for children are neither fashionable nor fashion forward. They should be unnecessary.
— Jonathan D (@Jonathan D) 1534785199.0

.@FOXNews is tone-deaf to reality. Watch as they glamorize bulletproof backpacks for children, and boast about pote… https://t.co/UGXGrJfZxx
— Brianna Westbrook (@Brianna Westbrook) 1534801187.0

Callas mentioned that MC Armor, a Colombia based company, had marketed the backpacks specifically for the United States:

In the U.S., sadly, there's the guns, Everybody can have a gun. So, here, kids need to be protected, and we have the fact that there is some school issues, so we need to bring this to the United States.

Callas also assured that the company had been working with pediatricians to determine the most effective protection:

We have a company with the research and development, and the pediatricians said kids before 15 years [old] – they don’t have fat, they don’t have enough muscles, so they need to have hard ballistics

The segment has led many to speak out against the marketing of bulletproof accessories as a long term solution for mass shootings. Among them, the artist La Roux whose song was used in the segment's introduction.News of the song's usage reached the artist within a day after the segment.

La Roux was quick to assure that she never gave the network permission to use the song.

Using 'Bulletproof,' a song I wrote about relationships, for a piece like this is abhorrent. I have never, and would never approve my music to be used in this way.

She wasn't the only one who was horrified at the song choice.

I always think to myself, “Can Fox News be any more tone deaf?” They open a segment about protective backpacks and… https://t.co/BVkkEyAkba
— Melissa Gaffney (@Melissa Gaffney) 1534817062.0

It's heartbreaking that school shootings have become so inevitable that bulletproof backpacks and children's clothes are now deemed necessary. However, until lawmakers begin to pass common sense gun reform, there's little more that parents can do.