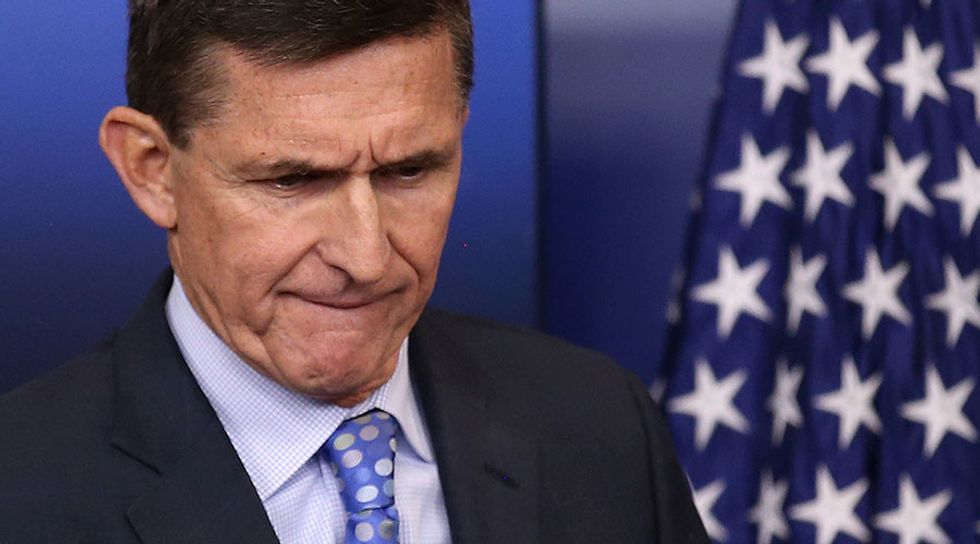 On the heels of the abrupt resignation of Mike Flynn as National Security Advisor, two Democratic lawmakers have issued calls for a classified briefing for Congress, saying there are still many questions left unanswered, and there is increasing pressure from investigative journalists for answers.

Representatives John Conyers, Jr. (D-Michigan) and Elijah Cummings (D-Maryland), the ranking members of the Judiciary and Oversight committees cited a Washington Post report that Sally Yates, the acting Attorney General, informed the Trump administration last month that she believed Flynn had misled senior White House officials about his conversations with the Russian ambassador to the United States. Yates apparently also warned officials that Flynn had been compromised by Russian interests, making him vulnerable to blackmail.

"We were shocked and dismayed to learn this evening of reports that three weeks ago, U.S. law enforcement officials warned the White House Counsel that General Flynn had provided false information to the public about his communications with the Russian government, but that the Trump Administration apparently did nothing about it,” the two said in a statement. “The reality is General Flynn was unfit to be the National Security Advisor, and should have been dismissed three weeks ago. Now, we in Congress need to know who authorized his actions, permitted them, and continued to let him have access to our most sensitive national security information despite knowing these risks. We need to know who else within the White House is a current and ongoing risk to our national security."

Last Friday, when asked a direct question on Air Force One whether he was aware of the allegations about Flynn, President Trump denied any knowledge. That statement seems at total odds with the information Yates provided the White House about Flynn, and raises troubling questions about any other motivations behind her recent ousting from the Justice Department.

Several other Democrats indicated they would push for a comprehensive investigation, and raised questions of their own.

Flynn's departure only matters if 1) he's followed by a mainstream, experienced replacement, 2) we get to bottom of the Trump/Russia story.
— Chris Murphy (@Chris Murphy) 1487047377.0

In his official resignation, Flynn insisted that the "fast pace of events" led him to "inadvertently" give Vice President Mike Pence and others "incomplete information" about his conversations with Sergey Kislyak, the Russian ambassador to the United States. Officials within the administration said the main topic of these conversations were the ongoing sanctions against Russia but said there was no evidence that the Russians attempted to exploit conflicting statements Flynn made to reporters about his conversations with Kislyak. Flynn denied speaking to Kislyak about the sanctions in a February 8 Washington Post interview, but changed his story the following day, telling The Post through a spokesman that he “couldn’t be certain that the topic never came up.”

The White House, through embattled Press Secretary Spicer, initially denied that the conversations between Flynn and Kislyak included the sanctions just imposed by the Obama administration. But as the story rapidly developed, and Flynn began to backtrack, the White House seemed uncertain what its position was. Kellyanne Conway stated that Flynn continued to have President Trump's full support, but just hours later Spicer seemed to walk that back as well.

But U.S. intelligence reports, according to officials with access to the information, showed that Flynn and Kislyak spoke during the 2016 presidential campaign and that the two continued to speak after Trump's victory on November 8. Yates and other intelligence officials specifically wondered whether Flynn may have violated the Logan Act. Under that statute, U.S. citizens "who, without authority of the United States, directly or indirectly commences or carries on any correspondence or intercourse with any foreign government or any officer or agent thereof, with intent to influence the measures or conduct of any foreign government or of any officer or agent thereof, in relation to any disputes or controversies with the United States" could face fines or a prison term of at least three years.

But the Logan Act has never been used in a prosecution, and Yates and other law enforcement officials believed the chances of bringing charges against Flynn in a case related to this statute were slim. Instead, they conceded that the FBI had already been investigating the Trump White House's Russian ties, which would now include the Flynn-Kislyak communications.

In their statement late Monday, Reps. Conyers and Cummings charged that Republicans were turning “a blind eye to their constitutional duty to conduct oversight on these issues.” The revelations about Flynn "warrants a full classified briefing by all relevant agencies, including the Department of Justice and the FBI," they said. They have asked for this briefing to take place no later than Thursday, Feb. 16.