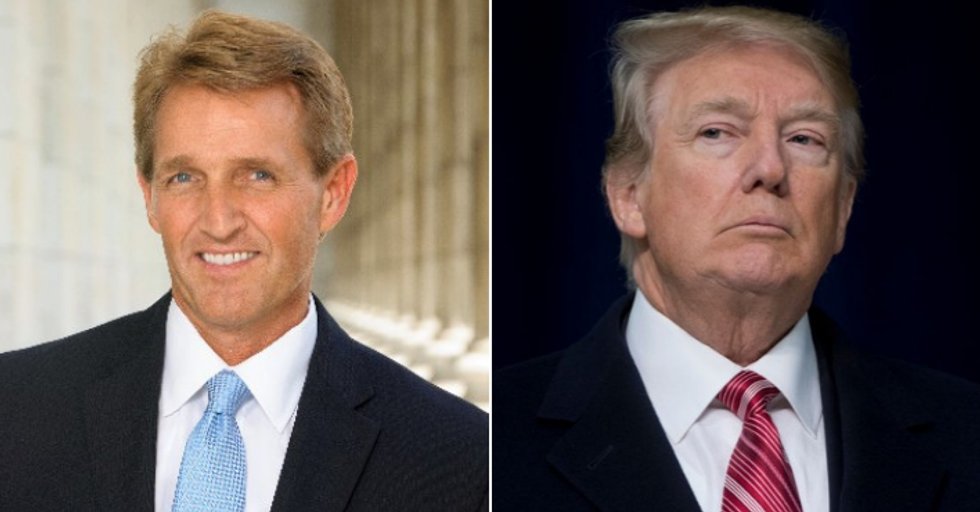 On Wednesday afternoon, President Donald Trump unveiled a new Republican campaign ad that many accuse of being blatantly racist fearmongering. The President posted the ad to his Twitter account.

Despite statistical evidence that undocumented immigrants commit fewer crimes and fewer violent crimes than natural born citizens in the United States, Trump continued to portray Latin American immigrants as violent threats to the US and blamed Democrats for any violence by immigrants.

The ad comes shortly after three conservative US citizens murdered 13 people with hate crimes targeting African Americans in Kentucky and Jews in Pennsylvania and another Republican citizen—labeled the MAGAbomber for his idolization of Trump and the GOP—sent a series of pipe bombs to prominent Democrats and critics the President targeted.

None of the three had ties to Latin America.

"It is outrageous what the Democrats are doing to our Country. Vote Republican now! Vote.GOP"

But not everyone in the GOP is applauding the new ad campaign.

According to Jake Tapper, Republican Senator Jeff Flake of Arizona who chose to retire rather than seek reelection commented:

"This is just a new low in campaigning. It’s sickening."

The retiring GOP Senator was far from alone in his sentiments. Many online denounced the President's post and called for people to show their disagreement with Trump's tactics at the polls during the midterm elections on November 6.

@DeanObeidallah @realDonaldTrump I am looking at this positively bc I think most americans don't fall for this fear… https://t.co/SkvbyntkC3
— JDP (@JDP) 1541077735.0

@realDonaldTrump I really don't understand what Trump means when he says that Democrats let him in - he was deporte… https://t.co/yzRnqzu8Ff
— James Miller (@James Miller) 1541077170.0

@james_in_snow @realDonaldTrump Took the words right out of my mouth. So the Democratic Party was standing at the b… https://t.co/TRJLhZbGjL
— Kevin Schneider (@Kevin Schneider) 1541078266.0

However people had harsh words for Senator Flake as well.

Many accused the Senator of being all talk and no action.

@jaketapper @JeffFlake I am tired of the social media outrage and zero action. For Pete’s sake, Senator DO something.
— Elizabeth Thorp (@Elizabeth Thorp) 1541042630.0

Some suggested Flake call his Senator.

@jaketapper @jchaltiwanger @JeffFlake Jeff Flake should call his senator and ask him to do something about it.
— Sanho Tree (@Sanho Tree) 1541031987.0

The new ad campaign shared by the President hopes to scare up votes for the GOP in the midterms. Midterm elections are slated for Tuesday, November 6, 2018 but early voting is already available.