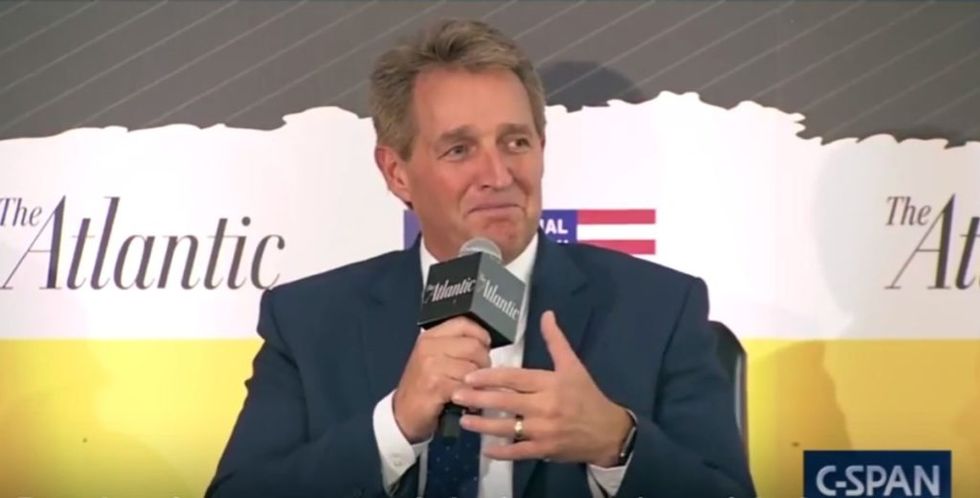 During an appearance at The Atlantic Festival in Washington DC, Senate Judiciary Committee members Jeff Flake and Chris Coons answered questions regarding the recent confirmation hearing for Brett Kavanaugh.

Democratic Senator Coons of Delaware finished a "what if Kavanaugh is given a lifetime placement on the Supreme Court" question and the host addressed Republican Senator Flake of Arizona for a response.

Flake's answer seemed to indicate Kavanaugh should not be confirmed. The Arizona Republican stated:

"I was very troubled by the tone of the remarks. The initial defense that Judge Kavanaugh gave was something like I told my wife: ‘I hope that I sound that indignant if I was unjustly maligned."

"But then it went on, and the interaction with the members was sharp and partisan, and that concerns me. And I tell myself you give a little leeway because of what he's been through. But, on the other hand, we can't have this on the Court. We simply can't..."

"...We simply have to elevate people to leadership positions and elect people who see it differently and understand the value and purpose of the Supreme Court."

Sen. @JeffFlake on Judge #Kavanaugh: "The interaction with the members was sharp and partisan and that concerns me.… https://t.co/ECtoYXvARg
— CSPAN (@CSPAN) 1538494691.0

During his opening statement after the testimony of Dr. Christine Blasey Ford—who accused President Donald Trump's SCOTUS nominee of sexual assault when she was 15—Kavanaugh attacked Democrats. He read from his prepared speech:

"This whole two-week effort has been a calculated and orchestrated political hit, fueled with apparent pent-up anger about President Trump and the 2016 election, fear that has been unfairly stoked about judicial record, revenge on behalf of the Clintons..."

Senator Flake also characterized the SCOTUS nominee as hostile toward Democratic Senators on the Senate Judiciary Committee. But the Supreme Court is not supposed to pick a party.

While SCOTUS Justices might be seen as conservative or liberal, they are not supposed to be seen as completely biased for or against a political party. Flake stated Kavanaugh's obvious animus against Democrats troubled him.

Flake previously said if Kavanaugh lied, that act also excluded him from being seated for a lifetime appointment on the SCOTUS bench. But when asked to clarify his remarks during The Atlantic Festival immediately after the event, Flake seemed "rattled" according to Elaina Plott, a writer for The Atlantic.

People on social media demanded a clear answer from Flake...

...both on the question of Kavanaugh lying before the Senate Judiciary Committee or during his confirmation interviews and on his partisanship.

.@JeffFlake-The question is no longer whether or not Kavanaugh lied during his testimony. It's clear he absolutely… https://t.co/YJvEoVDXh2
— Scott Dworkin (@Scott Dworkin) 1538447051.0

Jeff Flake said yesterday that if Brett Kavanaugh lied under oath, his nomination is over. Well senator? Do we hav… https://t.co/MV0HCAf0BM
— Jennifer Bendery (@Jennifer Bendery) 1538434168.0

Jeff Flake told 60 Minutes that Brett Kavanaugh would not be confirmed if the FBI probe showed that he lied to the… https://t.co/WZxv5upolG
— Jon Cooper 🇺🇸 (@Jon Cooper 🇺🇸) 1538441407.0

Today at @TheAtlanticFest, @JeffFlake criticized Kavanaugh as “partisan” and said “we can’t have that on the court.… https://t.co/GF2amvbdnl
— Adrienne LaFrance (@Adrienne LaFrance) 1538497269.0

@elainaplott @lrozen What he says has no bearing on what he does, unfortunately.
— danostrowski (@danostrowski) 1538493736.0

The Senate Judiciary Committee voted 11 to 10 along party lines to send Kavanaugh forward to the Senate or a full vote on his confirmation for a lifetime appointment to the Supreme Court. However Senator Flake placed a qualification on his "yes" vote of a full background check to be completed by the FBI before the vote in the Senate occurs.