Yet here we are. 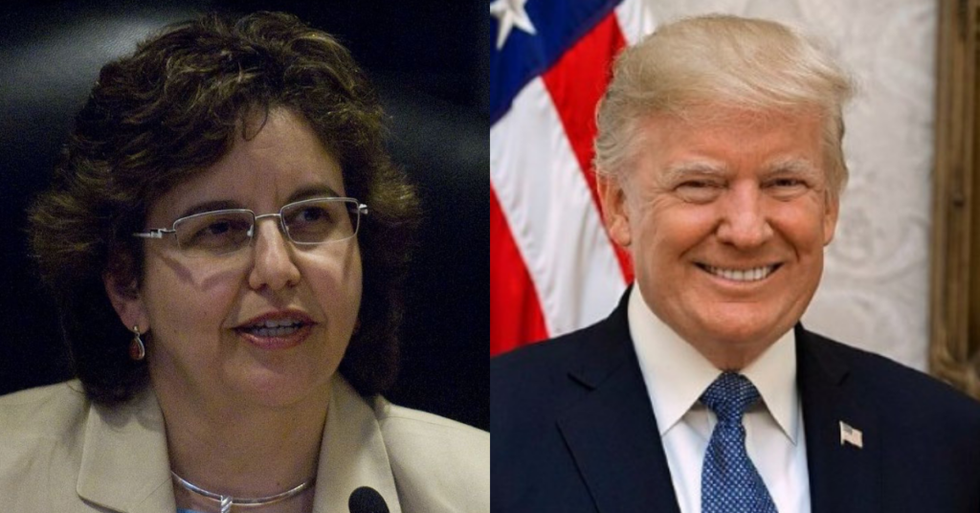 President Donald Trump shocked some and lived up to the expectations of others when during an interview with ABC News' George Stephanopoulos he admitted he would readily accept any foreign assistance during the 2020 presidential campaign and not necessarily notify the FBI. Ellen Weintraub, Chair of the Federal Election Commission (FEC) responded to the President's assertion that there was "nothing wrong with listening" to anything a foreign government might offer him.

In a post on the President's favorite form of communication, Twitter, Weintraub spelled out the rules of engagement for anyone running for federal office.

"I would not have thought that I needed to say this."

Attached to her tweet was an image of a memorandum laying out the wrongness of entertaining, soliciting and "just listening" to offers from foreign governments of help in election efforts.

"Let me make something 100% clear to the American public and anyone running for public office: It is illegal for any person to solicit, accept, or receive anything of value from a foreign national in connection with a U.S. election."

Weintraub added a bit of a history lesson...

"This is not a novel concept. Electoral intervention from foreign governments has been considered unacceptable since the beginnings of our nation. Our Founding Fathers sounded the alarm about "foreign Interference, Intrigue, and Influence."

...as well as why accepting foreign help in an election is wrong for the candidate and the country.

"They knew that when foreign governments seek to influence American politics, it is always to advance their own interests, not America's."

"Anyone who solicits or accepts foreign assistance risks being on the wrong end of a federal investigation. Any political campaign that receives an offer of a prohibited donation from a foreign source should report that offer to the Federal Bureau of Investigation."

While the response from Weintraub—clarifying to all candidates that accepting even "oppo tips" were still gifts and still prohibited—was lost on some Trump supporters, most respondents got the memo.

@EllenLWeintraub That’s funny, I would have thought the FEC chair would know the difference between a donation and… https://t.co/mdyzTuUzaZ
— Mark Davis (@Mark Davis) 1560476049.0

@MarkDavis @EllenLWeintraub That’s funny, I would have thought a grown man knows what “something of value” means.
— Mayes N Bloo (@Mayes N Bloo) 1560484564.0

Some Trump supporters also tried to justify the President's remarks with whataboutisms. But there again proved to be some holes in their arguments.

@EllenLWeintraub Your statement doesn't address if getting info from foreigners (such as Steele Dossier &… https://t.co/j06AzFHrlb
— Yossi Gestetner (@Yossi Gestetner) 1560474267.0

Others simply were grateful for someone in the federal government stepping up and speaking up.

During the course of his interview with ABC News, Trump asserted that information from foreign governments is something anyone would accept and not call the FBI. But his comments raise more questions about his past conduct.

If, as the President claimed, accepting such information was common practice and there was "no harm in listening," why did he dictate an untruthful response about the meeting his son, Don Jr., and current White House advisor and son-in-law, Jared Kushner, took with Russian government assets in 2016? Why did the President, his family members and his campaign lie for months about the purpose of the meeting?

The President has not yet responded to Weintraub's memo.