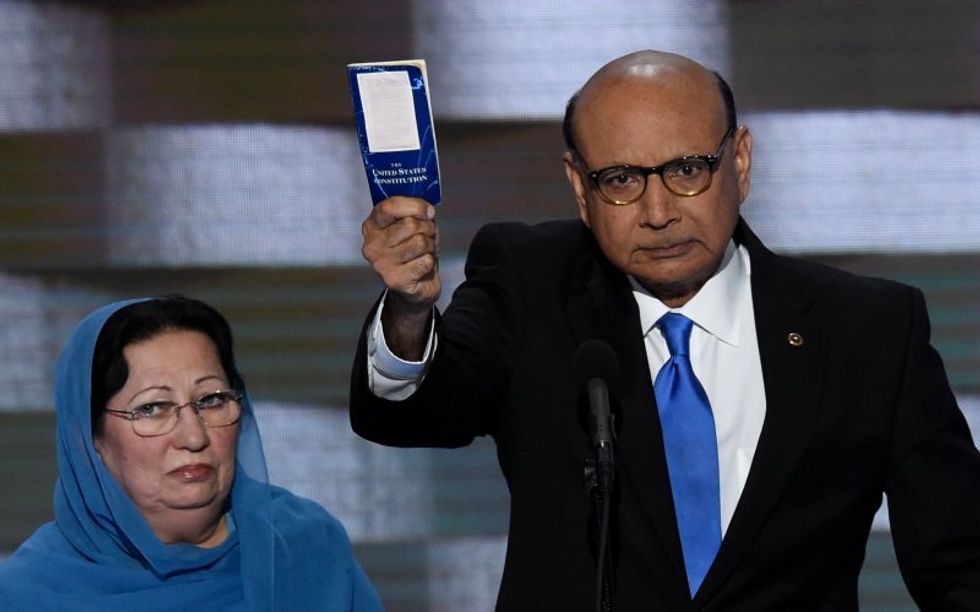 Khizr Khan, the father of a Muslim American Army captain slain in Iraq in 2004, delivered perhaps the most damning indictment of Donald Trump’s immigration proposals at the Democratic National Convention in Philadelphia last night. “Our son Humayun had dreams … of being a military lawyer, but he put those dreams aside the day he sacrificed his life to save the lives of his fellow soldiers,” Khan said. “Hillary Clinton was right when she called my son ‘the best of America.’ If it was up to Donald Trump, he never would have been in America.”

The crowd began to cheer the moment Khan pulled out a pocket-sized copy of the American Constitution. “Donald Trump, you are asking Americans to trust you with their future. Let me ask you: Have you even read the United States Constitution? I will gladly lend you my copy,” he said. “In this document, look for the words ‘liberty’ and ‘equal protection of law.’ Have you ever been to Arlington Cemetery? Go look at the graves of brave patriots who died defending [the] United States of America. You’ll see, all faiths, genders, and ethnicities. You have sacrificed nothing and no one.” Khan received a standing ovation.

Erick Erickson, a former editor of Red State and a vocal critic of Donald Trump and his campaign, was one of a number of prominent conservatives who praised Khan’s address. In a tweet, Erickson said that Republicans should “be ashamed” of making Trump their presidential nominee.

Commentator Meghan McCain, the daughter of Republican Sen. John McCain, called Khan’s speech “the most powerful” moment of the evening.

Most powerful speech of the DNC easily from a patriotic American, Khizr Khan. They should just end with that.
— Meghan McCain (@Meghan McCain) 1469757055.0

Captain Humayun Khan was born in the United Arab Emirates, grew up in suburban Maryland, and attended the University of Virginia. While inspecting the gates of his camp in Baquba, Iraq, he noticed a speeding vehicle approaching. He signaled for the vehicle to stop, ordering his men

to hit the ground. He took approximately 10 steps toward the vehicle. The vehicle, which carried two suicide bombers, then exploded, killing Captain Khan and injuring 10 of his fellow soldiers. Captain Khan was posthumously awarded  the Bronze Star and the Purple Heart for his bravery.

Fox News not playing the speech by the muslim soldiers parents who died for America. #DemsInPhilly
— Danny Schoen (@Danny Schoen) 1469755033.0