Facial Recognition Sunglasses Are Now a Thing, and Law Enforcement Is Already Using Them to Catch Criminals 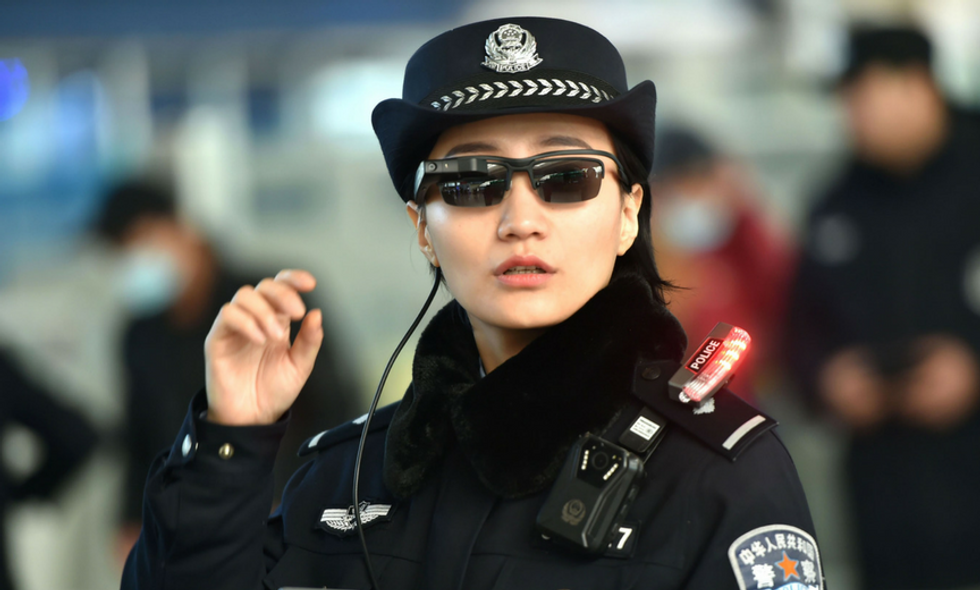 AFP/Getty Images This photo taken on February 5, 2018 shows a police officer wearing a pair of smartglasses with a facial recognition system at Zhengzhou East Railway Station in Zhengzhou in China's central Henan province. Chinese police are sporting high-tech sunglasses that can spot suspects in a crowded train station, the newest use of facial recognition that has drawn concerns among human rights groups.

Remember the first time you saw Terminator, when the cyborg portrayed by Arnold Schwarzenegger first spotted John Connor using the virtual reality technology that had been engineered into his brain? You might have thought: cool! I want that!

But then as you thought about it a little more, you may have been a little creeped out. Turns out you were totally justified.

Chinese railway police are using facial-recognition sunglasses to catch suspects at train stations in Zhengzhou, the capital of central Henan province. The eyewear, similar to the original Google Glass, was unveiled earlier this year and has already helped identify seven alleged criminals, according to the Communist Party's official newspaper People's Daily.

The glasses are linked to a database that can match travelers with criminal suspects. It’s not known exactly how long it takes for a match to be made in the real world, but Wu Fei, the CEO of the Beijing-based company that developed the glasses, LLVision Technology, told The Wall Street Journal that during testing the system was able to identify faces from a database of 10,000 in 100 milliseconds.

The sunglasses are controlled by a mobile unit and cost $636 (3,999 RMB), with an additional cost for facial recognition support. They give police “instant and accurate feedback” compared to the lag and static of using facial recognition through CCTVs as Wu Fei told the Wall Street Journal last month.

Chinese authorities say that, so far, the glasses have identified people suspected of a variety of misdeeds ranging from traffic infringements to more serious crimes like human trafficking. The technology also is credited with preventing 26 people using fake identity documents from traveling.

Chinese law requires people to use identity documents for train travel. The goal is to prevent people with excessive debt from using high-speed trains. It also is intended to limit the movement of religious minorities whose identity documents have been confiscated and who would likely have to wait years to obtain a valid passport.

Although this is the first time Chinese officials have used glasses to implement facial-recognition, the technology is widely used by police. What’s more, China also currently is building a system with the capability to recognize any of its 1.3 billion citizens in just three seconds.

The Latest Incarnation of Big Brother?

Not surprisingly, human rights groups decry these programs, saying the implementation of the technology infringes on the right to privacy. "Chinese authorities seem to think they can achieve 'social stability' by placing people under a microscope, but these abusive programs are more likely to deepen hostility towards the government," Sophie Richardson, China director of Human Rights Watch, previously said about different facial recognition technology being used to monitor religious minorities. "Beijing should immediately stop these programs and destroy all data gathered without full, informed consent." It’s doubtful that will happen.

Now China is expanding the facial recognition sunglasses program as police are beginning to use them in the outskirts of Beijing, according to Reuters. The program was used as extra security while the Chinese Parliament voted to extend Xi Jinping’s presidency to a lifetime rule, and paralleled the increased censorship and surveillance measures seen throughout China.

Police used the sunglasses to check travelers and car registration plates against the government’s blacklist in advance of that Parliament annual meeting. The Chinese government developed a list of people who are not allowed to enter the meeting and might face additional enforcement action. On that blacklist: criminals, journalists, political dissidents and human rights activists, among others.

The South China Morning Post also has reported that traffic police in the southern Chinese city of Shenzhen — who already enjoy a reputation for strict enforcement of road rules in the city of 12 million — are going to use the technology to identify jaywalkers with the help of artificial intelligence (AI) and facial recognition technology.

The program is not exactly subtle. Authorities plan to install large LED screens at intersections to display the faces of jaywalkers. The paper reports that an AI firm based in Shenzhen, Intellifusion, which already provides technology to the city’s police, is now in negotiations with local mobile phone carriers and social media platforms such as WeChat and Sina Weibo to develop the instantaneous texted-fine system.

Are There Societal Benefits?

For all the “big brother” concerns about the law enforcement implications of the technology, there are some who actually see societal benefits.

For instance: Imagine meeting someone you should know – you know you’ve met this person before – but you just can’t recall his name. But what if you’re wearing a pair of glasses, similar to the ones being used by Chinese law enforcement authorities, that will scan social media for a match on their face and then display their name in front of one of your eyes within two seconds? Awkward social situation and embarrassment spared!

But it’s not just about saving face. If you were to activate the glasses’ camera function, you could look at an object and in seconds the brand, model number, its price on e-commerce websites and reviews of the product will scroll in front of your eyes.

Think this sounds like science fiction, like the movie Terminator? Think again. That’s exactly what Rokid Glass promises to do. As Rokid’s Reynold Wu said, they will offer “an anytime, anywhere AR (augmented reality) visual overlay in front of your eyes that effectively syntheses voice interaction, AI, and image AI.”

It’s no surprise the AR glasses generated so much buzz at CES 2018, the consumer electronics show in Las Vegas.

“All the people coming to our booth at CES really loved the idea of social integration of facial recognition in Rokid Glass,” says Wu. “That’s what surprised me the most.”

According to Rokid, the Chinese start-up founded by an Alibaba graduate, has new funding and says consumers should be able to buy a pair of its AR glasses by the third or fourth quarter of this year. Rokid is partnering with different companies on the product-search function.

While they’re too clunky to be worn every day, they do win fashion points. They’re battery-operated and equipped with Wi-fi and Bluetooth. The demo unit at the trade show could be connected to other devices such as a laptop and smartphone.

“Unquestionably, a fair amount of feedback we got had to do with the need to make the glasses smaller, and improve their functions,” says Wu, director of product and business operations at the Hangzhou-based company’s San Francisco research lab.