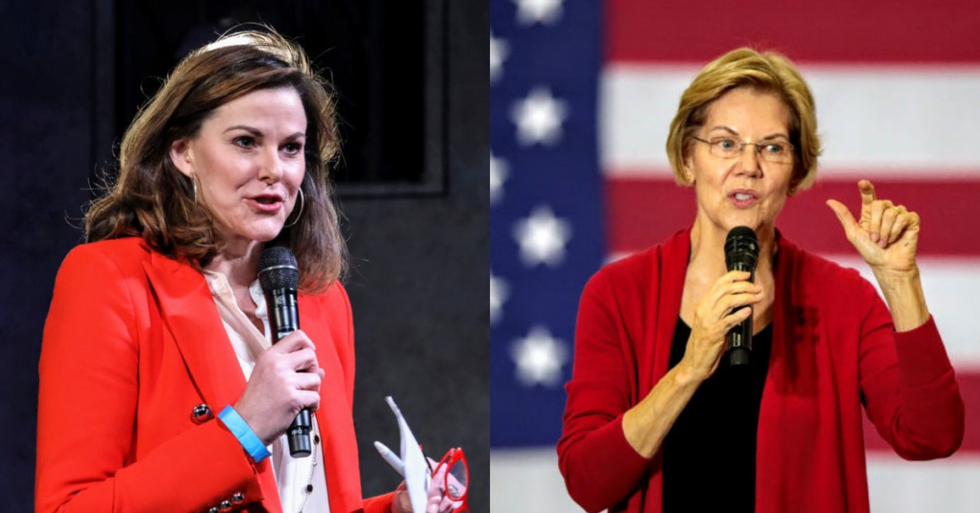 In addition to her duties establishing Facebook's "quality news" feature in a dedicated tab, Brown runs her own news outlet: The 74.

The 74 is not owned by nor officially affiliated with Facebook. It is unclear if it will earn a trusted news source designation like Facebook News under Brown's direction gave Breitbart News.

However, like Breitbart, The 74 is affiliated with a member of the Trump administration. The news outlet was created with a grant from Betsy DeVos' family foundation.

Brown also serves on the board of DeVos' The American Federation for Children (AFC). The nonprofit supports and funds Republican candidates.

In addition to connections with the Trump administration, Brown made The Daily Caller—a conservative publication known for its White nationalism, homophobia, transphobia and racism an "official Facebook fact-checking partner." Brown was also the one to defend naming Breitbart a "quality news source."

In The 74, Warren is described as:

Brown is forthcoming about her connection to Facebook and The 74. But when Legum sent Facebook a list of questions about Brown, DeVos, Warren and a potential conflict of interest, he received a simple statement:

"The 74 is not part of Facebook News. Campbell's work with The 74 is well-known and she's been transparent about her role with the nonprofit for many years. Any suggestion otherwise is baseless."

When Legum published the statement, he eliminated the last sentence.

@fbnewsroom @JuddLegum You guys include Breitbarf in your 'trusted news sources.' You guys take over a million a we… https://t.co/eD2bDLzVKr
— Old Grey Horror (@Old Grey Horror) 1573500189.0

@fbnewsroom @JuddLegum You guys have done nothing at all to atone for the @CamAnalytica scandal. You let crooks ste… https://t.co/JowH4nKRV0
— Old Grey Horror (@Old Grey Horror) 1573500269.0

@fbnewsroom @JuddLegum This is why Facebook does not belong in the information industry. They themselves are not a… https://t.co/98rpfTCPJY
— The Keeper (@The Keeper) 1573500557.0

In addition to backlash for their ill advised tweet, Legum also provided a response to the attack.

3. I believe this is the first time Facebook has ever attacked an individual journalist through its official accoun… https://t.co/HLJATtH3yi
— Judd Legum (@Judd Legum) 1573500672.0

By Monday afternoon, Brown also decided to respond. However several claims she made were quickly fact checked and came up lacking.

As with Facebook Newsroom's response, it probably would have been better to not respond instead of responding with easily disproven lies.

What actions Facebook will take, if any, to eliminate conflicts of interest in their news division remains to be seen. But for now, Campbell Brown's presence appears to be more detrimental than helpful in bolstering public confidence.

The book The Four: The Hidden DNA of Amazon, Apple, Facebook, and Google is available here.