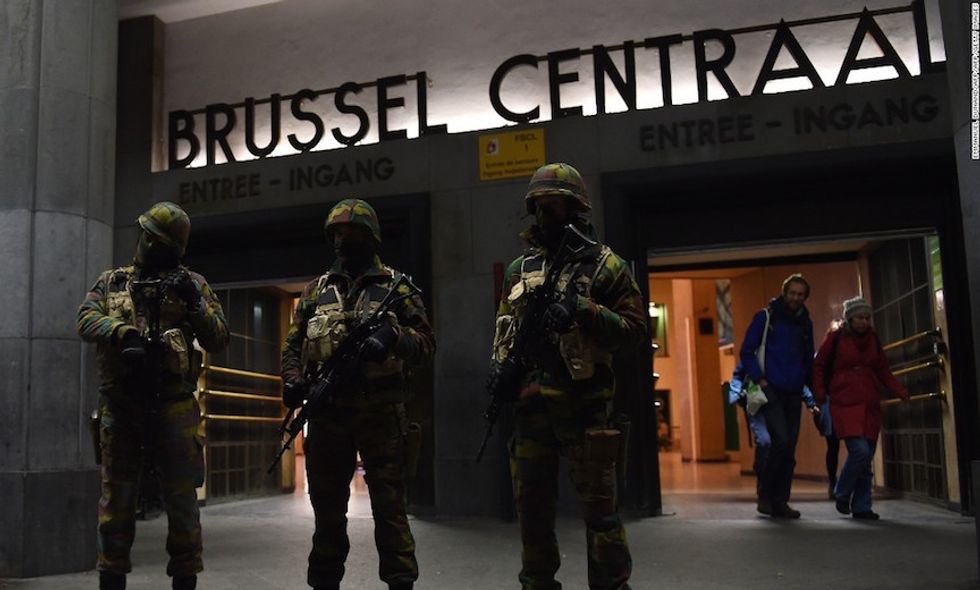 This is a developing story, and we will continue to update as more information comes in.

Belgian media reports at least 34 deaths and 130 injuries in explosions that rocked the capital of Brussels on Tuesday morning.

Departures hall at Zaventem in the aftermath of the blasts. Credit: Source.

At least ten of the victims died in the blasts in the suburb of Maalbeek, where headquarters for the European Union (EU) are located. All metro stations in Brussels have been closed and service suspended.

The attack at Zaventem Airport is a possible suicide attack, according to The Belgian Office of the King's Prosecutor. At least one of the explosions at the airport happened outside security checkpoints for ticketed passengers and near airline check-in counters.Authorities raised the country’s terror threat level to four, its highest. This means army soldiers can be sent into the streets to address security needs. It is currently unclear what caused these explosions. Belgian prosecutor Frederic Van Leeuw described the attacks as “terror attacks.”

“For the moment, we are asking people to stay where they are,” said Prime Minister Charles Michel in a tweet.

There is still confusion about the attacks at the metro station. Locals in and around the airport reported at

least two explosions occurred within the airport’s departure hall. Eyewitnesses saw dozens of people taken out on stretchers and even luggage trollies.

“When I opened the curtains and looked out, I could see people fleeing,” said Anthony Barrett, who witnessed the carnage from the window of his hotel room. “It’s clearly a very serious incident.”

Jeffrey Edison never made his flight. He cleared security and was by the departure gate at the time the explosions occurred. 200 to 300 people rushed toward him from the security checkpoint. He told reporters it took authorities about 25 minutes to tell passengers what had happened. Airport security, with a disaster plan in place, evacuated passengers, leading them to the runways.

The attacks come mere days after the arrest of Salah Abdeslam in the Brussels suburb of Molenbeek. Authorities say Abdeslam is an instrumental figure in last year’s Paris attacks.

President Obama, who is visiting Cuba, was briefed on the attacks this morning. “The president was apprised this morning of the explosions in Brussels, Belgium, “ an official said in a statement. “U.S. officials have been and will continue to be in close contact with their Belgian counterparts.”

Donald Trump, who is currently the Republican presidential frontrunner, pledged to tighten border control. “I would close up our borders,” he said. We are lax and we are foolish.”

Belgium’s royal family was safely evacuated after the attack. “The King and Queen are devastated by the attacks,” they said in an official statement. “The emotional thoughts of the King and Queen go first to the victims and their families and the rescue services which are doing everything possible to help the victims."