So What Exactly Does $400 Million Buy the Chinese? 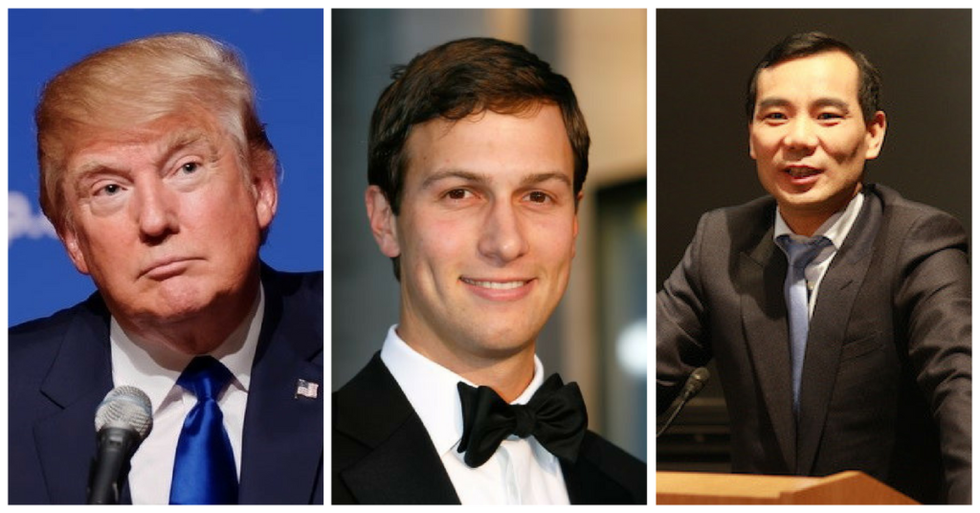 A New York real estate company owned by the family of Jared Kushner, President Donald Trump’s son-in-law and senior adviser, is negotiating a $400 million stake in its Fifth Avenue flagship skyscraper to a Chinese company with ties to that country's ruling party. The Chinese company, Anbang Insurance Group, plans to spend billions more to transform the 41-story tower at 666 Fifth Avenue into a condominium and retail hub. The deal would value the tower at $2.85 billion, the most ever for a single Manhattan building. The partnership will refinance $1.15 billion in existing mortgage debt, benefitting Kushner enormously even as he oversees the nation's foreign policy.

The deal would create a financial marriage between two powerful families in the world's biggest economies. Kushner Cos. declined to discuss details of the plan or name or name any potential investors or lenders, and a company spokesman, James Yolles, said that Jared Kushner sold his ownership stake in the building to family members to avoid conflicts of interest with his White House role.

“Kushner Companies has taken significant steps to avoid potential conflicts and will continue to do so," Yolles said in a written statement.

When asked about the deal at a press conference, White House Press Secretary Sean Spicer said that Kushner "went through extraordinary lengths” to comply with conflict-of-interest rules.

Ethics experts argue, however, that Kushner has not done enough to comply with these rules.

"At the very least, this raises serious questions about the appearance of a conflict that arises from the possibility that the Kushners are getting a sweetheart deal," said Larry Noble, general counsel at the Campaign Legal Center. "A classic way you influence people is by financially helping their family."

News of the negotiations surfaced as President Trump prepares for his first meeting with Xi Jinping, the Chinese president, which will be held next month. Kushner himself played a part as a de facto envoy for the administration in planning the visit. As one of his father-in-law's closest advisers, Kushner will provide input on a wide range of issues affecting China, ranging from national security concerns and territorial disputes to trade matters and allegations of currency manipulation. The chairman of Anbang, Wu Xiaohui, dined with Kushner at the Waldorf Astoria hotel in November. (Wu is married to the granddaughter of Deng Xiaoping, China's former paramount leader, and has a business partnership with the son of a top army marshal. Anbang purchased the Waldorf Astoria in 2014.)

Tim Ragones, an outside spokesman for the Chinese conglomerate, declined to comment on the deal terms but denied that the company's ownership structure, which promoted the federal government to halt acquisition of further assets, is unclear. “Anbang is a highly transparent company that operates in accordance to the standards of public companies and strictly abides by applicable regulatory requirements," he said.

Chinese government records tell a different story. Anbang, which boasts almost $300 billion in assets, is owned by 39 companies, many of them shell companies that, when traced, lead to empty offices and government registration bureaus. At least 35 of these companies trace all or part of their ownership to relatives of Wu, to Deng's granddaughter or to Chen Xialou, the marshal's son.

Still, a spokesman for Anbang issued a statement insisting that there was no agreement and that “there is no investment from Anbang for this deal.”

The Kushners purchased 666 Fifth for $1.8 billion in January 2007 as part of a plan to reposition themselves as major Manhattan developers. The financial crisis upended these plans, and the family struggled to make its mortgage payments. The Kushners sold segments of the property to Vornado Realty Trust, which owns 49.5 percent of the building’s office space and a slice of the retail, and others. Vornado would have to be bought out for the deal to close. The plan also relies on EB-5, the government program which grants two-year visas and a path to permanent residency to foreigners who invest a minimum of $500,000 in projects that create jobs in economically distressed areas.