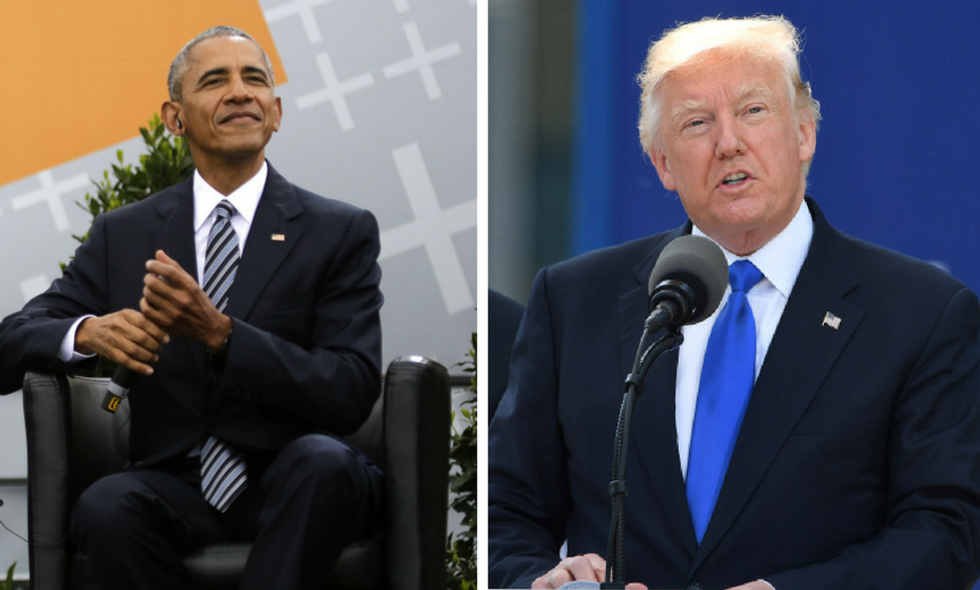 On Thursday morning, German Chancellor Angela Merkel welcomed President Barack Obama for a 90 minute panel discussion at Berlin's Brandenburg Gate as tens of thousands of cheering Germans looked on. It was a warm reunion for two former partners on the world stage.

That same afternoon, Merkel traveled to Brussels for a meeting of NATO member states, where she met with fellow European leaders as well as President Donald Trump during his first foreign trip. The visit was marked by a scolding speech by Trump, which was received cooly, if not mockingly, by the gathered European leaders.

The contrast in the two visits served to highlight the different styles and world views of two wildly different American presidents.

During his visit with Merkel, President Obama called Merkel "one of my favorite partners throughout my presidency." He also cautioned against a policy of isolationism.

“When we provide development aid to Africa or we are involved in conflict resolution in areas where war has been taking place, [or] we make investments to try to deal with climate change … these things we do not do just for charity, not just because it’s the right thing to do or out of kindness.

“If there are disruptions in those countries and conflicts and bad governance, war and poverty, in this new world that we live in, we can’t isolate ourselves, we can’t hide behind a wall."

In Brussels later that day, President Trump awkwardly addressed his fellow NATO nation leaders, chastising them for not investing in defense, saying “23 of the 28 member nations are still not paying what they should be paying and what they are supposed to be paying." His speech seemed to betray a deep misunderstanding of NATO's defense spending targets.

But what was perhaps most notable about his speech is what he didn't say: he failed to express America's commitment to Article 5 of the NATO charter, the notion that an attack on one member is an attack against all. His failure to reaffirm our commitment to the defense of our NATO allies reflected his isolationist anti-NATO rhetoric from his campaign, a distinct contrast with the former President.

The iconic moment from President Trump's visit serves to sum up what some have dubbed Trump's "bull-in-a -china-shop" style:

The warm relationship President Obama had with NATO leaders during his tenure as president was highlighted by former White House photographer Pete Souza on Instagram, simply noting, there was "no jostling involved."